But, as I have stated, it was not always thus. It was once but the first low wash of the waves where now rolls a human sea mountain walls, rude civilization, tented homes, wild debauchery, robbery, rapine, and mid-day murders.

Early in the spring of 1862, the rumor of rich discoveries on the Salmon River flew through Salt Lake City, Colorado, and many other places in the far West. A wild rush to the new diggings was the result, and a stream of human beings set in for the new El Dorado by the toilsome way of Fort Hall and the Snake River. As their trains drew nearer the long-sought spot they found further conveyance by wagons impossible, as the rocky, mountainous roads were impassable for wagons. They were likewise informed that the mines were already overrun by a vast army of gold hunters from California, Oregon, and all places on the Pacific slope. They also learned that many of those who had been driven by adverse circumstances from Salmon River had spread far over the adjacent country and that new discoveries had been made at Deer Lodge. 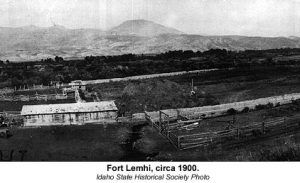 The streams of immigration now diverged toward that point crossed the mountains between Fort Lemhi and Horse Prairie Creek and taking a cut-off to the left, sought to strike the old trail from Salt Lake City to Deer Lodge and Bitter Root valleys. A mining camp was also established with success on Grasshopper Creek, afterward called Beaver Head Diggings. It was the first to work the gulches east of the Rocky Mountains. From these incipient labors flowed the great mining industries which in an incredibly short space of time gave to Montana her well deserved reputation as the richest gold-mining field discovered since that of California.

A tide of immigration now poured in from all directions, and with it came the bad as well as the good; and among the former were the desperadoes Henry Plummer, Charles Reeves, Moore, and Skinner, all of whom suffered death at the hands of the honest men of the Territory, who, when they found they could not apply the forms of law in a community where the written law was a dead letter or had never existed, maintained the right with their own strong hands to subdue the brute force of violence and murder. The wonderful discoveries at Alder Gulch of the almost fabulous placer diggings attracted a vast tide of rapid immigration that was known among gold seekers as a stampede. It likewise attracted a large number of the dangerous class, who saw a broad and rich field for their lawless operations.

They quickly organized themselves into a secret compact body, with signs, grips, and with a captain, lieutenants, secretary, road-agents, and outriders, who became the terror of the whole country. A correspondence was inaugurated between Bannack and Virginia City, and surveillance placed on all travel between those points. To such a fine point was their system carried that horses, men, and coaches were in some intelligible manner marked to designate them as objects of plunder. In this manner were the members of the gang notified by their spies, oft times employed by the very object of their plunder, in time to prevent the escape of their victims. They were all armed with a pair of revolvers, a double-barrelled shot-gun with a large bore, the barrels cut short off, and a dagger or bowie-knife. Thus armed, and mounted on swift and trained horses, and disguised with masks and blankets, they awaited their victims in ambush, from which, on the approach of a conveyance, they would spring forth, and covering the inmates with their guns, command them to alight and throw up their hands. If this order was not instantly obeyed, the result would be sudden death. Otherwise, they would be disarmed and made to throw their wealth upon the ground. Concluding their operations with a search for concealed property, they would permit the despoiled passengers to proceed on their way, while they themselves rode rapidly in the opposite direction.

Wherever a new settlement was effected, or new discoveries of the precious metals made, there followed the bandits until their operations spread in all directions. They became the scourge of the mountains, and no men or class of men were safe from their attacks.

To illustrate the class of desperadoes engaged in this nefarious work, we will take the case of Henry Plummer, a man of such smooth manners and insinuating address that he was termed a perfect gentleman, although known to be both thief and assassin, and had once filled the office of marshal of Nevada City, whence, after having been twice imprisoned for murder, he had fled to Oregon, and thence to Montana. In Montana, he was elected sheriff of Beaver County. He first made his way, in company with his companion, Jack Cleveland, to Bannack City, whose fame, in the winter of 1862 and 1863, had widely spread. It was the first mining camp of importance established east of the Rocky Mountains, and large immigration ensued, with the customary number of the ruffian class. Among them all, Plummer was chief, noted for his desperation and his skill in the rapid handling of his pistol. He shot and killed his friend and old acquaintance arid companion Jack Cleveland, who was disposed to dispute his title as chief and frequently boasted of his own murderous exploits.

Shortly after that occurrence another of the gang, named George Ives, was conversing on the street with his friend George Carhart, and not liking the style of his speech, laid him low with a shot from his revolver.

Another eminent road-agent, named Haze Lyon, owed a citizen of Bannack four hundred dollars for board and lodging, and one morning, having won a large sum of money the night previous at the gaming-table, was asked by his landlord to settle his account. He answered the modest request by drawing his revolver and ordering the citizen to dust out, with which gentle command he immediately complied.

Plummer was tried for the murder of Cleveland and acquitted on the ground that his opponents’ language was irritating. Charles Reeves and a man named Williams, who had fired into a camp of friendly Indians just to see how many they could kill at one shot, were also tried and acquitted. Others who had likewise been guilty of heinous offenses were also acquitted, and the baser elements of society felt secure in the performance of their lawless deeds, and murder and robbery went on unmolested.

Plummer, who had been chosen chief of the road-agents, had likewise, as previously stated, succeeded in having himself elected sheriff of the county, and appointed two of his band as deputies. In the meantime, an honest man had been elected sheriff at Virginia City and was informed by Plummer that he would live much longer if he would resign his office in his favor. Pear of assassination compelled him to do as bidden, and Plummer became sheriff at both places. With his robber deputies to execute his orders, the people of Montana were at the mercy of thieves and bandits. One of his deputies was an honest man, and becoming too well versed in the doings of Plummer and associates, was sentenced to death by the road agents and publicly shot by three of the band. There was no longer any security of life arid property.