I tell you “h—l’s to pay, boys,” said English. “If we don’t keep our heads level, well go up the flume like a spring salmon. Which way do you think is the station?” 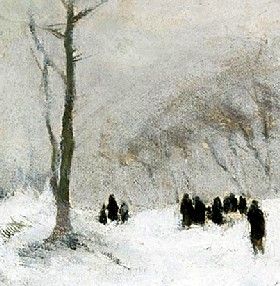 No one could tell. To add to the consternation, they now found that three of their party were missing. They shouted through the storm, but no answer came back. They never saw them again. In the spring some Indians found and brought in a notebook, in which was recorded this writing: Lost in the snow December 19th, 1862, James A. Keep of Macoupin County, Illinois; Wesley Dean of St. Louis; Ed Parker of Boston. At the same time, they brought in a pair of boots containing bones of human feet. A party of citizens went out and found the remains of the three men, together with a large amount of gold-dust.

English stopped, studied a moment, and then, resolving to take all in his own hands, said: “We must stick together; stick together and follow me. I will shoot the first man who refuses to obey, and send him to hell “a-fluking.”

Again the robber chief, now in supreme command in the hour of danger and death, led on. The band struggled on in silence, benumbed, helpless, and half dead. Scott seemed like a child beside his chieftain. The remainder of both parties were as feeble and as spiritless as he. English was the only one whose spirit rose above the storm. His whole ferocious nature seemed aroused. At times he swore like a madman. The storm increased in fury, darkness came suddenly on, and they could not see each others faces.

English shouted aloud, above the blast, Come up to me. They obeyed and huddled around him like children. There is but one chance, said he; cut your saddles off your horses. He got the horses as close together as possible and shot them down, throwing away his pistols as he emptied them. Placing the saddles on top of the pile of horses, he made each man wrap his blankets around him and huddle together on the mass. “No nodding now,” said English. “I’ll shoot the first man that fails to answer when I call him.”

To sleep a moment meant death by freezing, and this robber chief, this king of men, in the hour of dire peril and death knew it. Every man seemed to surrender all hope, save this fierce man of iron. He moved as if in his element. He made a track in the snow around the party on the heap and kept constantly moving and shouting. Within an hour they saw the effect of his rude action. The animal heat from the horses warmed their benumbed and stiffened limbs as it rose from their prostrate bodies, while darkness and the storm reigned over them. Thus they remained during the stormy hours of the night. English, shouting and swearing through and above the blasts, tramped in the circular track he made about them, pistol in hand, to keel) them awake and alive, while he battered his own body to keep it from freezing. Thus the terrible night wore on until toward morning when suddenly English stopped shouting, and uttered a terrible oath of surprise. The storm had suddenly lifted like a curtain, and far above in the heavens moved the round moon on its stately course. It was to that band of half-dead and well nigh frozen men as a pillar of flame to the children of Israel. They were saved. With the dawn of the morning, the iron man bade the others follow him. It was almost impossible for them to rise. They fell, rose again, fell, and finally stood on their feet; all save one, a small German named Ross. He was frozen to death.

At eleven o’clock in the morning English, who still resolutely led the way, gave a shout of joy as he stood on the edge of a basaltic cliff and looked down on the parterre. A long straight pillar of white smoke rose from the station, like a column of marble supporting the overhanging dome. Again it was the pillar of cloud that led the children of Israel now leading these lost children of the mountains amid the snow wastes of the dreary plain. Warmed back to life again, they returned and brought in the body of their companion, with his bag of gold dust, and in a few days, the trail was broken. The company of miners voluntarily gave to some of English’s band a portion of their wealth. English, however, resolutely refused to accept a present. They parted at the station, and the miners pursued their way in safety to Walla Walla, Washington.

Some months later English, Scott, and another of his band, named Peoples, were arrested for highway robbery, and were placed, securely bound, under guard in a log house on the stage road. That night was organized the first Vigilance Committee in Idaho, and, in fact, in the Northwest Territories. It consisted of six men belonging to the Idaho Express Company. At midnight they condemned the robbers to death and acquainted them of their fate. Scott asked for time to pray, English swore furiously, and Peoples was silent.

One of the vigilantes approached Scott while in the attitude of prayer, and began to adjust the noose about his neck. English cried out, “Hang me first, and let him pray!”

The wonderful courage of the man appealed to the sympathies and admiration of these rough men of the mountains, and they would have spared him, but having proceeded thus far, they felt they could not falter now. They had but one rope and executed them one at a time. When the rope was adjusted about the neck of English, he was quietly asked by his executioners to invoke the mercy of his God. He held his head down a moment, muttered something, and then straightening up, turned toward Scott and said, “Nelson, pray for me a little, can’t you, while I hang?

Peoples died without a motion or a struggle. When Scott’s turn came he was still praying devoutly. He offered large sums of money, which he had secreted in the mountains, for his life; but they told him he must die too. Seeing there was no escape, he removed his watch and rings, kissed them tenderly, and handed them to one of the vigilantes, saying, “Send these to my poor Armina,” and quietly submitted to his fate. At dawn, the three men lay dead and rigid upon the cabin floor. The blood that dried in the veins of one was of the kind that runs through hero’s veins and had he in his early days been guided in the nobler channels of life, he might have been a Ceasar or a Marlborough. With courage as sublime as that of the bride of Collatinus, and the fortitude of an Alexander, he saved the lives of eleven human beings, and within four months after this sublime act of heroism died an ignominious death by the halter for robbing a stage-coach. 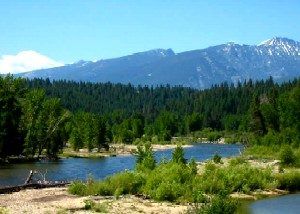 Far to the northwest, among the canyons and gorges of the Rocky Mountains, and near the headwaters of the Missouri River, running up to the British line, and forming a part of the territorial boundary of the United States, is the young State of Montana. At the time of which I am now writing it was a young territory, or rather a part of Idaho Territory, with no settlements or signs of civilization save the mining camps scattered through its southern division. But its growth was rapid. Thriving, prosperous communities and cities of wealth and refinement have taken the places of rude mining camps. Traversed by railroads, it is now filled with farms and gardens, workshops and factories, mills and mines, and is inhabited by a brave, intelligent, self-reliant race, embracing all trades and professions of life, and now forms one of the brightest stars shining in the blue field of the imperial banner of the mighty sisterhood of States.