Information of the bloody deed soon reached every miner in the camp, and one and all hurried to the spot where lay the victim of her mad fury. The sight of his fair young face and sunny hair clotted with his lifeblood, and the innumerable ghastly wounds upon his body as it lay uncovered in the hands of the doctor, who hoped to find some spark of life remaining, so worked upon the sympathies of the miners that some cheeks long unused to tears were wet from weeping. The young life had gone out forever, and the bright sunny eyes of the boy favorite of the camp were closed in the un-awakening slumber of death.

The rage of his rough friends knew no bounds. The woman was instantly seized and placed in the custody of guards while the Vigilance Committee of Downieville should determine her fate. That decree was death by hanging, and the murderess, with her hand yet reeking with the blood of her victim, was taken to the upper bridge of the Yuba, and there hanged until life was extinct. Such was the swift punishment meted out by the rude populace in the excitement of the hour. 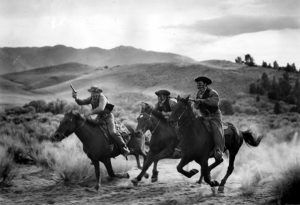 It was, indeed, an ungloved iron hand that, in the homes of these early pioneers, first upheld the pillars of society and put to death the disturbers of the public peace in the absence of an organized form of government. They reasoned, however, that the institution of government for a people is that the governed may obtain security of life and property; that without such safeguard social order could not exist; society would be anarchy, and the law of right would be that of might.

The ignominious death of these outlaws at the hands of Vigilance Committees was the result of crimes for the most part cowardly and barbarous. Yet within the veins of some given over to deeds of violence that blacken the pages of criminal history flowed blood from which heroes are made. It has been known that in moments of extreme peril, when humanity, overwhelmed by surrounding dangers, halted and surrendered, and in despair lay down to die, a lawless but master spirit from life’s royal blood rose up like a giant to lead the way to hope and success.

When the news reached California that gold had been found in great abundance in the watershed of the Columbia River, without waiting for a confirmation of the rumor, great numbers of miners poured over the mountain walls of California and Nevada in search of their fortunes in the new goldfield. It was, however, but another of those stampedes which wreck the hopes and lives of the adventurous arid roving miner, and one by one they struggled back to the more prosperous fields they had abandoned for this ignis fatuus [foolish affair.] One of these parties, nearly starved, attempted to reach Shoshone Falls through the thickly timbered mountains from Elk City. While searching for game one day they chanced to strike a little stream that ran down from the mountain on the edge of a prairie lying near the center of a large snow-covered horseshoe opening to the south, about thirty miles in diameter. A fallen tamarack had thrown up the earth, and, moved by the instincts of his nature, one of the gold hunters took up a pan of the earth and carelessly washed it in the stream. What was his astonishment to reap as his reward a handful of rough little specimens of gold dust of the size of wheat grains! It was of poor quality, but it proved to be the original discovery of the great gold belt embracing Salmon, Warren, Boise, Owyhee, and Blackfoot, which afterward formed the political division of Idaho Territory, now in its Statehood.

On the third day of December 1862, a fierce storm swept over the whole gold belt, and the thousands of homeless and unprotected miners, who had been sleeping on the ground in their blankets while working their claims, began to pour over the horseshoe in the direction of Lewiston, taking with them the proceeds of their labor on the bar and in the gulch. A party of nine, of whom Joaquin Miller was one, were making their way through Walla Walla via Lewiston with a large amount of gold dust belonging to the individual members of the party. They had been followed from the mines by Dave English and Nelson Scott, two of the most noted desperadoes, accompanied by four others of like character, but not so well known. As there was not a shadow of civil law to protect the honest toiler, nor any other form of protection as yet, at these mines, these men, black with crime, moved about the various tents with the same freedom as men of good character.

English was a thick-set, powerful man, with a black beard and commanding manners. One of his gray eyes appeared to be askew, otherwise, he was a fine-looking man, usually good-natured, but terrible when aroused. Scott was tall, slim, brown-haired, with features as fair and delicate as those of a woman.

All of the band of six were young men well known in California, one of them having been connected with a circus. The party of miners, after six days of travel, reached Lewiston in safety, and English and his companions arrived the following day. The river was frozen over, the steamboats all tied up for the winter, and the ferry almost impassable.

The miners and robbers watched each others motions, and the latter knew that their motives had been divined. The miners had scarcely crossed the ferry when the robbers followed. A large amount of gold-dust of the miners was the object of their pursuit. They were splendidly mounted and well-armed and prepared for any deed to accomplish their end. It was twenty-four miles to Petalia, the nearest station. The days were short and the snow deep. With the best of fortune, the miners did not expect to make it until night. At noon they left the Alpowa, and rode to a vast plateau without stone, stake, or sign to point the way to Petalia, twelve miles away.

Gold panning in the American West

The snow became deeper and more difficult, and a furious wind set in that blinded and discouraged their horses. The cold was intense. They had not been an hour on this high plain before each mans face was a mass of ice and their horses white with frost. The sun-faded in the storm like a star of morning drowned in a flood of dawn. Grave fears now beset them. English and his robber party were now in advance.

Once they stopped, consulted, looked back, and then in a little while moved on. The storm was so terrific that the trail behind them was obliterated the instant they passed on; return was therefore impossible, had it been possible for them to re-cross the river should they reach it. Again the robbers halted, huddled together, looked back, and again struggled on, English, the man of iron, for the most part keeping the lead. The miners now knew they were in deadly peril, not from the robbers, but from the storm. Again the robber band halted, grouped together, gesticulating wildly, as if in violent argumentative altercation, and again moved slowly on. The party of Miners followed, the horses floundering in the deep snow, while the trail closed like a grave behind them. About three o’clock in the afternoon, standing up to his waist in snow, English shouted to them to approach. Pushing on through the storm, with their heads bowed and necks bent, like cattle, shielding themselves in the fierce blast, they reached the robber party.