The tolling of the bell of the Monumental Fire Engine house on the Plaza was the signal for the members to instantly assemble fully armed.

Thousands of citizens secretly joined the organization, and their services were soon called into requisition. On the evening of the 10th of June the shipping office of a Mr. Virgin, on the wharf, was robbed of a small safe containing a considerable sum of money. The thief was captured and placed in the custody of members of the Vigilance Committee at their rooms. The property was identified, and the prisoner convicted on the testimony of the boatman who had pulled out with the prisoner and his booty into the bay, where he was subsequently arrested. The Chief of Police now appeared at the rooms of the committee and demanded admittance and the custody of the prisoner. His request was refused.

After carefully deliberating upon the character of the punishment, it was finally determined that though not a capital offense, the necessity existed for the execution of the criminal and that it should take place at once to prevent a rescue by the friends of the culprit, or an armed interference on the part of the civil authorities. He was accordingly notified of his doom, and given one hour to prepare for death. Shortly after midnight the condemned man was taken under a strong guard to Portsmouth Square, and hanged to the cross-beams of the gable end of an adobe building which had been used in former times as a post office, but was then unoccupied. A coroner’s jury of inquest on the day following returned this verdict:

John Jenkins, alias Simpkins, came to his death by being suspended by the neck with a rope attached to the end of the adobe building on the Plaza at the hands of an association of citizens styling themselves a Committee of Vigilance, of whom the following members are implicated. Then followed the names of the citizens who had been most conspicuous on the occasion.

When this verdict and the names were published on the day following, the Vigilance Committee ordered the names of all its members published likewise. The committee, however, was strongly opposed by the civil authorities and the legal fraternity generally, and Judge Campbell, of the Court of Sessions, holding his court sessions on the days appointed, charged his Grand Jury that all those concerned in the illegal execution had been guilty of murder.

The Governor of the State, MacDougal, afterward United States Senator, issued a proclamation addressed to the people at large, in which he referred to the action of the people as the “despotic control of a self-constituted association unknown to and acting in defiance of the laws in the place of the regularly organized government of the country.”

In August the committee tried two men named Samuel Whittaker and Robert McKenzie. They were proven guilty of very serious offenses of burglary, robbery, and arson. It was understood that they were to be executed on the 21st of that month. A writ was issued by Judge Norton, of the Supreme Court, commanding the sheriff to bring the prisoners before his court at a certain hour to be dealt with according to law. That night the sheriff and one deputy gained admission in some way to the rooms of the committee, where the prisoners were confined, led them downstairs, and placed them in charge of police officers awaiting them below. No immediate steps were taken by the committee to remedy this interference with their purposes, but on the following Sunday, shortly after two o’clock in the afternoon a carriage turned into Broadway from DuPont Street and halted a short distance from the jail. It was at this hour that the prisoners were brought from their cells to hear divine service from the chaplain of the prison. 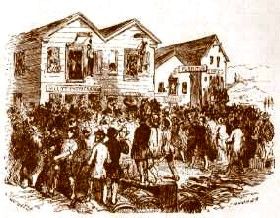 A pre-concerted rush was made from the outside, the prisoners captured and carried off to the rooms of the committee. The fire bell tolled the signal for the assembly of the members of the committee, and along with them poured a stream of 15,000 people before their rooms, wild with excitement, and yelling their approbation of the recapture of the prisoners. Brought face to face with the civil authorities, they would stand or fall by that act. The prisoners were sentenced to immediate execution, and hanged at once from the windows of the rooms of the committee, in the presence of and with the approbation of the assembled multitude. Only seventeen minutes elapsed between the reception of the prisoners and their execution by order of the committee. Public opinion and the press declared that the Vigilance Committee had redeemed its honor.

Having thus established their authority and vindicated their cause, they arose to the full height of their power and struck terror among criminals of every degree. Henceforth there was no need for their services. Crime fled before their power of suppression, and they now left the execution of the laws in the hands of the civil authorities, retaining, however, their unaltered organization, and imparting to the officer as well as the criminal within his hands the knowledge that at any moment when necessary the committee would again ring the alarm upon its fire-bell, and protect and preserve that social order which by their vigilant acts they had rescued from a chaos of crime and placed in the hands of the civil authorities.

As far as known, but one woman died at the hands of the Vigilantes of California. She was a Spanish woman, of remarkable beauty, who dealt the game of Monte in the early days of Downieville. Clothed in her gay attire, her dark lustrous eyes flashing with the excitement of the game, and a profusion of dark locks falling upon her shoulders, together with a voluptuous form and superb carriage, she was the object of much attention from the rough miners and others who gathered around the table, and sat beneath her spell at the fascinating game of Monte.

Among the miners was a young man who had come from Kentucky to the distant El Dorado to seek his fortune among its gold hills. He was of fine physical appearance, genial disposition, warm and generous nature, and ever ready to do a good turn for his neighbor, or perform some deed of charity or kindness to the suffering, and withal as hard a toiler as the rest. He became a general favorite among all the rough miners. 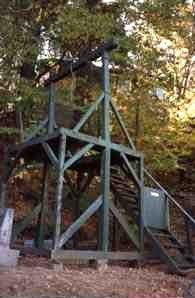 Of course, the sole places of amusement in those early days of Downieville were within the garish lights of the saloon and by the side of the Monte tables, over one of which the Spanish beauty presided. Like all his sex, the Kentuckian was charmed by her fascination. One night, with some companions, on his way to his tent after the game had closed and the senorita Dolores had retired, he passed the tent of the fair Spaniard, and while peeping for an instant through the canvas lapel of her abode was suddenly, in a playful freak, pushed by his companions through the door into the darkness of her tent, and fell prostrate upon its floor. Without a moment’s hesitation or an inquiry as to the intruder’s identity, she sprang upon him like a tigress in its lair, and plunged her dagger repeatedly in his prostrate form, until he laid a bleeding corpse at her feet.