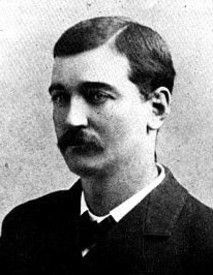 So I organized a posse which included my two brothers, Doc Holliday, Bob Paul and the renowned Bat Masterson — I may have something to say about that prince of frontiersmen at another time — and lost no time in reaching the scene of the shooting. There lay Bud Philpott’s body, mangled by the wheels of the coach he had driven so long. And there, among the bushes were the masks the robbers had worn. In the middle of the road we found nearly forty cartridge shells, showing how many shots had been fired in cold blood after the receding coach.

It was easy enough to find the place where their horses had been tied, and from there the trail into the mountains was plain enough. But the story of that chase is too long to be told here. I mentioned last Sunday that it consumed seventeen days, and those who read that narrative will remember that this holdup and that manhunt were the prologue to the bitter and bloody feud that is the central, somber episode of my thirty years on the frontier.

And now for the story of how Curly Bill became the proud proprietor of a Wells-Fargo shotgun. Charley Bartholomew was a messenger who used to run on the coach from Tombstone to Bisbee. Once every month he was the custodian of a very tidy sum of money sent to pay off the miners. Naturally enough, such a prize as that did not escape the attention of such audacious artists in crime as Frank Stillwell, Pete Spence, Pony Deal and Curly Bill. In fact, the four desperadoes I have named, with one other, planned a masterly holdup which they executed with brilliancy and dash. It happened this way:

The coach carrying the miners’ wages had got out of Tombstone about twenty miles when the industrious quintette made their appearance on horseback, three on one side of the road and two on the other. They did not come to close quarters, but kept pace with the coach at a distance of 300 or 400 yards on either side of the road, pumping into it with their Winchesters, and aiming to kill the horses and the messenger. Of course Bartholomew’s shotgun might as well have been a blowpipe at that range, and if he had a Winchester with him he did not use it to any effect.

These Indian tactics proved eminently successful in breaking down the nerve of the men on the stage, for after they had run for a mile with an occasional lump of lead knocking splinters out of the coach, Bartholomew told the driver to stop — an injunction which he obeyed very gladly, the robbers came up and made them throw up their hands. They took everything there was to be taken, which amounted to $10,000 and sundries. Among the sundries was Charlie Bartholomew’s shotgun, with which Curly Bill afterwards tried to fill me full of buckshot, with results fatal to himself. Having marched all hands into the brush the rustlers rode off.

It was not many hours before my brother Morgan and I were on the trail. Two of the men had tied gunny sacks round their horses’ hoofs and ridden in the direction of Bisbee, which was twelve miles away. The trail was a difficult one at first, but after a few miles of hard riding the gunny sacks had worn out, and at that point the hoof marks became quite plain. They led directly into Bisbee, to the livery stable kept by Frank Stillwell and Pete Spence. Of course we arrested the pair of them, and they were identified readily enough. As the mails had been robbed I was able to lay a federal charge against them. Stillwell and Spence were still under bonds for trial when my brother Morgan was murdered. And Stillwell was the man who fired the shot. It will be recalled that Stillwell was one of a gang that waylaid me at the depot in Tucson when I was shipping Morgan’s body to California, and that he was killed in the attempt. As for Pete Spence, it is only a short time ago that he was released from the penitentiary in Yuma after serving a term for killing a Mexican.

Pony Deal escaped from the scene of the stage robbery into New Mexico, where he was afterward killed while stealing cattle by the gallant Major Fountain, at the head of his rangers. The story of Major Fountain’s murder is so recent that I need not repeat it.

There is such an appalling amount of killing in the foregoing two paragraphs that I will turn for what stage-folk call “comic relief” to a stage robber whom I had the pleasure of knowing slightly in former years. I met him first in Dodge City, Kansas, and always regarded him as a meritorious and not especially interesting citizen, who was afflicted with a game knee and who spoke with a brogue. Afterward he turned up in Deadwood, when I was there. There were a great many stage robberies around Deadwood at that time, and all the reports had for their central figure a lone road agent, tightly masked, who walked with a limp.

The story one shotgun messenger told me was that, when the coach had halted in response to summons from behind a tree, he plucked up courage to ask the identity of the stranger. Whereupon there came the answer, in the richest of brogues:

“It’s Lame Bradley, Knight of the Road. Throw out that box.”

The messenger still hesitated whereupon Lame Bradley shot a hole in his ear. The box was thrown down a moment later.

Lame Bradley robbed coach after coach around Deadwood, and then, when suspicion was directed toward him, he returned to Dodge, where he spent money very freely. Afterward he moved to the Panhandle in Texas, where he was killed and robbed by a chum. The chum, by the way, was duly captured and hanged.

Heigho! More killing! And who would ever have expected such garrulity from an old frontiersman? I actually astonish myself.