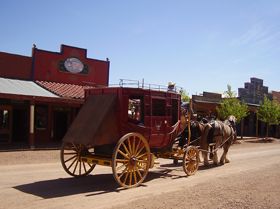 “My God, Wyatt, we’re in for it!” gasped Bud, ducking forward instinctively and turning an appealing look on me. “What shall we do?”

“There’s only one thing to be done,” I said. He saw what I meant by the way I handled the gun.

“Ye ain’t surely going to make a fight of it, are ye, Wyatt?” he said anxiously. “It looks kinder tough.”

“Certainly I am,” I said, feeling to see that my six-shooters were where I wanted ’em. “Now listen. The minute they holler `Halt!’ you fall down in the boot, but for God’s sake keep hold of the lines. I’ll take the two on the left first, and keep the second barrel for the pair on your side.”

Now all this had passed very quickly and we were bearing down on the strangers at a steady lope. Bud groaned. “I’ll do what you say,” he protested, “but if I was you I’d let ’em have the stuff, and then catch ’em afterwards.”

As we got within range of the four men I threw my gun on them. Even as I did so it flashed across me that they wore no masks; that their faces were wondrously pacific, and that no sign of a gun peeped out among them. Just as I realized that we had been fooled, the four threw up their hands with every appearance of terror, their distended eyes fastened on the muzzle of my gun, their lips moving in voluble appeals for mercy. Bud jammed down the brake and jerked the team onto their haunches, showering valiant curses on the men to whom he had proposed to surrender a moment before.

They were harmless Mexicans who had been searching the brush for some strayed broncos. The impulse that led them to plant themselves by the road on the approach of the stage was sheer idiocy, and they were lucky that it did not cost them their lives. What they really had intended was to ask us if we had seen any horses back along the road. 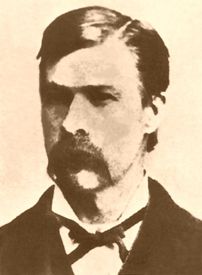 This opera bouffe [comedy] situation was the nearest approach to a hold-up that came within my experience. My brother Morgan, who succeeded me, was equally fortunate. After he left the service the post was resumed by Bob Paul, whom I had succeeded at the time when he retired in order to run for Sheriff of Pima county. And it was then that Bud Philpott ran into the adventure which capped with tragedy our comedy encounter with the Mexicans.

It was in 1881. The stage left Tombstone at 7 o’clock in the evening with a full load of passengers inside and out, and a well-filled treasure-box in the front boot. They changed teams as usual at Drew station, fifteen miles out. About three hundred yards further on the road crosses a deep ravine. Just as the horses started up the opposite side of this ravine, the coach following them by its own momentum, there came a shout of “Halt there!” from some bushes on the further bank. Before the driver could have halted even if he had wanted to, they started in with their Winchesters, and poor Bud Philpott lurched forward with a gurgle in his throat. Before Bob Paul  could catch hold of him he fell down under the wheels, dragging the lines with him.

“Halt there!” shouted the robbers again.

“I don’t halt for nobody,” proclaimed Bob Paul, with a swear word or two, as he emptied both barrels of his gun in the direction the shots came from. His judgment was superior to his grammar, for we learned afterwards that he had wounded one of the rustlers.

Now things happened quickly on the frontier, where bullets count for more than words, and the greatest difficulty I have encountered in the task of writing these recollections is that of trying to convey an idea of the rapidity with which one event follows another.

The moment the first shots were fired and Philpott fell, the horses plunged ahead so viciously that nothing could have stopped them. In missing the messenger and killing the driver the robbers had defeated their own plans. As Bob fired he moved over to Philpott’s seat to get his foot on the brake, thinking that it could not possibly improve matters to have the coach overturned while it was under fire. Imagine the horses yanking the coach out of the ravine and tearing off down the road at a breakneck gallop, with the lines trailing about their hoofs. And, imagine Bob Paul with his foot on the brake hearing shots and the cries of frightened passengers behind him and wondering what was going to happen next.

What did happen was this: The rustlers had made such elaborate plans for the holdup that they never dreamt of the coach getting away from them. Hence they had tied up their horses in a place where they could not be reached with the speed necessary to render pursuit practicable. With all hope of plunder vanished, and with poor Bud Philpott lying dead in the ravine, these ruffians squatted in the middle of the road and took pot shots at the rear of the coach. Several bullets hit the coach and one mortally wounded an outside passenger.

Such were the coyotes who kenneled in Tombstone during the early ’80’s. They did this thing deliberately. It was murder for murder’s sake — for the mere satisfaction of emptying their Winchesters.

The horses ran away for two miles, but luckily they kept the road, and when they pulled up Bob Paul recovered the lines and drove the rest of the way into Benson, with the dying passenger held upright by his companions on the rear outside seat. The man was a corpse before the journey ended. 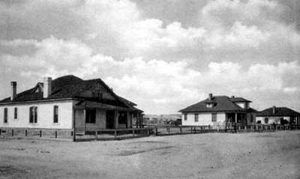 At Benson, Bob mounted a swift horse and rode back to Tombstone to notify me of the murders. I was dealing faro bank in the Oriental at the time, but I did not lose a moment in setting out on the trail, although faro bank meant anything upwards of $1,000 a night, whereas man hunting meant nothing more than work and cold lead. You see, an affair like that affected me in a double capacity, for I was not only the Deputy United States Marshal for the district, but I continued in the service of the express company as a “private man.”