A snowstorm in the mountains was a terrible thing to encounter by the coach; all that could be done was to wait until it had abated, as there was no going on in the face of the blinding sheets of intensely cold vapor which the wind hurled against the sides of the mountains. All inside of the coach had to sit still and shake with the freezing branches of the tall trees around them. A summer hailstorm was much more to be dreaded, however; for nowhere else on the earth do the hailstones shoot from the clouds of greater size or with greater velocity than in the Rocky Mountains. Such an event invariably frightened the mules and caused them to stampede; and, to escape death from the coach rolling down some frightful abyss, one had to jump out, only to be beaten to a jelly by the masses of ice unless shelter could be found under some friendly ledge of rock or the thick limbs of a tree.

Nothing is more fatiguing than traveling for the first day and night in a stagecoach; after that, however, one gets used to it and the remainder of the journey is relatively comfortable. The only way to alleviate the monotony of riding hour after hour was to walk; occasionally this was rendered absolutely necessary by some accident, such as breaking a wheel or axle, or when an animal gave out before a station was reached. In such cases, however, no deduction was made from the fare, that having been collected in advance, so it cost you just as much whether you rode or walked. You could exercise your will in the matter, but you must not lag behind the coach; the Indians were always watching for such derelicts, and your hair was the forfeit!

In the worst years, when the Indians were most decidedly on the war-trail, the government furnished an escort of soldiers from the military posts; they generally rode in a six-mule army-wagon and were commanded by a sergeant or corporal; but, in the early days, before the army had concentrated at the various forts on the great plains, the stage had to rely on the courage and fighting qualities of its occupants, and the nerve and the good judgment of the driver.

If the latter understood his duty thoroughly and was familiar with the methods of the Indians, he always chose the cover of darkness in which to travel in localities where the danger from Indians was greater than elsewhere; for it is a rare thing in Indian warfare to attack at night. The early morning seemed to be their favorite hour when sleep oppresses most heavily; and then it was that the utmost vigilance was demanded.

One of the most confusing things to the novice riding over the great plains was the idea of distance; when mile after mile was traveled on the monotonous trail, with a range of hills or a low divide in full sight, yet hours rolled by and the objects seemed no nearer than when they were first observed. The reason for this is the absolute clearness of atmosphere, such an indescribable transparency of space through which distant objects are seen, that they are magnified and look nearer than they really are. Consequently, the usual method of calculating distance and areas by the eye was ever at fault until custom and familiarity forced a new standard of measure.

Mirages, too, were of frequent occurrence on the great plains; some of them wonderful examples of the refracting properties of light. They assumed all manner of fantastic, curious shapes, sometimes ludicrously distorting the landscape; objects, like a herd of buffalo, for instance, though 40 miles away, would seem to be high in the air, often reversed, and immensely magnified in their proportions.

Violent storms were also frequent incidents of the long ride. I well remember one night, about 30 years ago, when the coach in which I and one of my clerks were riding to Fort Dodge, Kansas was suddenly brought to a standstill by a terrible gale of wind and hail. The mules refused to face it, and quickly turning around nearly overturned the stage, while we, with the driver and conductor, were obliged to hold on to the wheels with all our combined strength to prevent it from blowing down into a stony ravine, on the brink of which we were brought to a halt. Fortunately, these fearful blizzards did not last very long; the wind ceased blowing so violently in a few moments, but the rain usually continued until morning. 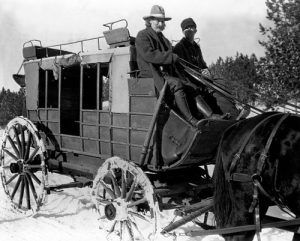 It usually happened that you either at once, took a great liking for your driver and conductor, or the reverse. Once, on a trip from Kansas City, nearly a third of a century ago, when I and another man were the only occupants of the coach, we entertained quite a friendly feeling for our driver; he was a good-natured, jolly fellow, full of anecdote and stories of the Trail, over which he had made more than 100 sometimes adventurous journeys.

When we arrived at the station at Plum Creek, the coach was a little ahead of time, and the driver who was there to relieve ours commenced to grumble at the idea of having to start out before the regular hour. He found fault because we had come into the station so soon, and swore he could drive where our man could not “drag a halter-chain,” as he claimed in his boasting. We at once took a dislike to him and secretly wished that he would come to grief, in order to cure him of his boasting. Sure enough, before we had gone half a mile from the station he incontinently tumbled the coach over into a sandy arroya, and we were delighted at the accident. Finding ourselves free from any injury, we went to work and assisted him to right the coach — no small task; but we took great delight in reminding him several times of his ability to drive where our old friend could not “drag a halter-chain.” It was very dark; neither moon or star visible, the whole heavens covered with an inky blackness of ominous clouds; so he was not so much to be blamed after all.

The very next coach was attacked at the crossing of Cow Creek by a band of Kiowa warriors. The Indians had followed the stage all that afternoon, but remained out of sight until just at dark, when they rushed over the low divide, and mounted on their ponies commenced to circle around the coach, making the sand dunes resound with echoes of their infernal yelling, and shaking their buffalo-robes to stampede the mules, at the same time firing their guns at the men who were in the coach, all of whom made a bold stand, but were rapidly getting the worst of it, when fortunately a company of United States Cavalry came over the Trail from the west, and drove the Indians off. Two of the men in the coach were seriously wounded, and one of the soldiers killed; but, the Indian loss was never determined, as they succeeded in carrying off both their dead and wounded.

Mr. William H. Ryus, who was a driver and messenger for 35 years and had many adventures, told me the following incidents:

“I have crossed the plains 65 times by wagon and coach. In July 1861, I was employed by Barnum, Vickery, and Neal to drive over what was known as the Long Route, that is, from Fort Larned, Kansas to Fort Lyon, Colorado — 240 forty miles, with no station between. We drove one set of mules the whole distance, camped out, and made the journey, in good weather, in four or five days. In winter we generally encountered a great deal of snow and very cold air on the bleak and wind-swept desert of the Upper Arkansas River, but, we employees got used to that; only the passengers did any kicking. We had a way of managing them, however, when they got very difficult; all we had to do was to yell Indians! and that quieted them quicker than forty-rod whiskey does a man.