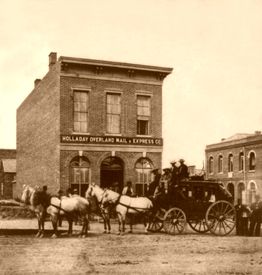 In July 1850, an account of the first mail stage westward from Independence recorded:

“The Santa Fe line of mail stages left this city on its first monthly journey on the 1st of July.  The stages are got up in elegant style, and are each arranged to convey eight passengers. The bodies are beautifully painted, and made water-tight, with a view of using them as boats in ferrying streams. The team consists of six mules to each coach. The mail is guarded by eight men, armed as follows: Each man has at his side, fastened in the stage, one of Colt’s revolving rifles; in a holster below, one of Colt’s long revolvers, and in his belt a small Colt’s revolver, besides a hunting-knife; so that these eight men are ready, in case of attack, to discharge one hundred and thirty-six shots without having to reload. This is equal to a small army, armed as in the ancient times, and from the looks of this escort, ready as they are, either for offensive or defensive warfare with the Indians, we have no fears for the safety of the mails.

“The accommodating contractors have established a sort of base of refitting at Council Grove, Kansas, a distance of 150 from this city, and have sent out a blacksmith, and a number of men to cut and cure hay, with a quantity of animals, grain, and provisions; and we understand they intend to make a sort of traveling station there and to commence a farm. They also, we believe, intend to make a similar settlement at Walnut Creek next season. Two of their stages will start from here the first of every month.”

The monthly stages started from each end of the route at the same time; later the service was increased to once a week; after a while to three times, until in the early 1860’s daily stages were run from both ends of the route, and this was continued until the advent of the railroad. Each coach carried eleven passengers, nine closely stowed inside — three on a seat — and two on the outside on the boot with the driver. The fare to Santa Fe was $250, the allowance of baggage being limited to 40 pounds; all in excess of that cost 50¢ per pound. In this now seemingly large sum was included the board of the travelers, but, they were not catered to in any extravagant manner; hardtack, bacon, and coffee usually exhausted the menu, save that at times, there was an abundance of antelope and buffalo.

Stagecoach with guard sitting on top, protecting whatever wealth it might have been carrying. (1913)

There was always something exciting in those journeys from the Missouri River to the mountains in the lumbering Concord coach. There was the constant fear of meeting Indians. Then there was the playfulness of the sometimes drunken driver, who loved to upset his tenderfoot travelers in some arroya, long after the moon had sunk below the horizon.

It required about two weeks to make the trip from the Missouri River to Santa Fe, New Mexico unless high water or a fight with the Indians made it several days longer. The animals were changed every 20 miles at first, but later, every ten, when faster time was made. What sleep was taken could only be had while sitting bolt upright, because there was no laying over; the stage continued on night and day until Santa Fe was reached.

After a few years, the company built stations at intervals varying from ten miles to fifty or more; and there, the animals and drivers were changed, and meals furnished to travelers, which were always substantial, but never elegant in variety or cleanliness. Passengers were obliged to partake or go hungry of station meals that included a biscuit hard enough to serve as “round-shot,” and a vile decoction called, through courtesy, coffee — but God help the man who disputed it!

Some stations, however, were notable exceptions, particularly in the mountains of New Mexico, where, aside from the bread — usually only tortillas, made of the blue-flint corn of the country — and coffee, composed of the saints may know what, the meals were excellent. The most delicious brook trout, alternating with venison of the black-tailed deer, elk, bear, and all the other varieties of game abounding in the region. The passenger cost was $1. 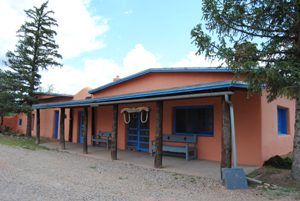 Thirteen years ago I revisited the once well-known Kozlowski’s Ranch, a picturesque cabin at the foot of the Glorieta Mountains, about half a mile from the ruins on the Rio Pecos. The old owner was absent, but, his wife was there; and, although I had not seen her for 15 years, she remembered me well, and at once began to deplore the changed condition of the country since the advent of the railroad, declaring it had ruined their family with many others. I could not disagree with her view of the matter, as I looked on the debris of a former relative greatness all around me. I recalled the fact that once Kozlowski’s Ranch was the favorite eating station on the Santa Fe Trail; where you were ever sure of a substantial meal — the main feature of which was the delicious brook trout, which were caught out of the stream which ran near the door while you were washing the dust out of your eyes and ears.

The trout have vacated the Pecos River; the ranch is a ruin, and stands in grim contrast with the old temple and church on the hill, and both are monuments of civilizations that will never come again.

Weeds and sunflowers mark the once broad trail to Santa Fe, and silence reigns in the beautiful valley, save when broken by the passage of “The Flyer” of the Atchison, Topeka, and Santa Fe Railroad, as it struggles up the heavy grade of the Glorieta Mountains a mile or more distant.

Besides the driver, there was another employee — the conductor or messenger, as he was called. He had charge of the mail and express matter, collected the fares, and attended generally to the requirements of those committed to his care during the tedious journey; for he was not changed like the driver, but stayed with the coach from its starting to its destination. Sometimes, 14 individuals were accommodated in case of emergency; but, it was terribly crowded and uncomfortable riding, with no chance to stretch your limbs, save for a few moments atstations where you ate and changed animals.

In starting from Independence, powerful horses were attached to the coach — generally four in number; but, at the first station they were exchanged for mules, and these animals hauled it the remainder of the way.

Drivers were changed about eight times in making the trip to Santa Fe, and some of them were comical fellows, but full of nerve and endurance, for it required a man of nerve to handle eight frisky mules through the rugged passes of the mountains, when the snow was drifted in immense masses, or when descending the curved, icy declivities to the base of the range. A cool head was highly necessary, but frequently accidents occurred and sometimes were serious in their results.