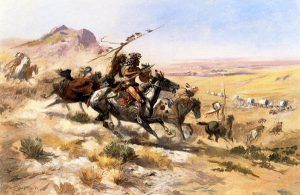 The popular belief among Americans at the time, as echoed in Congressional testimony by Storrs, was that American Indians hardly ever risked the lives of their warriors unless it was for the purposes of revenge or in a state of open warfare. What was not understood was the larger truth that warriors willingly risked their lives in order to protect their tribes from other Indian raiders or from non-Indian travelers, who often unjustly reacted to attacks against them. Josiah Gregg alluded to this when he wrote that peaceful relations between Indians and traders were short-lived: It is greatly to be feared that the traders were not always innocent of having instigated the savage hostilities that ensued….Instead of cultivating friendly feelings with those few who remained peaceful and honest, there was an occasional one always disposed to kill, even in cold blood, every Indian that Though Gregg understated the situation, retaliatory actions to Indian hostilities appear to be the  Americans’ – military and traders – strategy throughout the course of the trade. This reaction violated the wording in many of the agreements between the US and the tribes, which provided protection to the tribal members in the event of hostilities towards them by travelers and traders, but the tribes were most often considered at fault.

Partly in response to the growing tensions between the traders and the American Indians, the first military post was soon established. Colonel Henry Leavenworth founded Fort Leavenworth, the first permanent fort in Kansas, on the west bank of the Missouri River on May 8, 1827. Established to guard the Indian frontier, the post also served to protect the rights of American Indian tribes, regulate trade and contact, garrison troops who protected travelers on the Santa Fe Trail, and generally preserve the peace on the frontier. The fort was the headquarters for military commanders in the Department of the Missouri and later was the general depot for supplies to all military forts and camps in the West. In May of 1834 the War Department designated Fort Leavenworth as the regimental headquarters of the 1st US Dragoons, and upon arrival of Dragoon Companies A, C, D, and G in September of that year, Fort Leavenworth became headquarters in fact. In 1835 Colonel Henry Dodge led an expedition of dragoons to the Rocky Mountains. He held council with numerous Indian tribes along the way, even reporting back to the War Department on the state of land improvement for tribes that received allotments. Leaving Fort Leavenworth on May 29, Dodge and three companies of dragoons, numbering some 125 men, headed toward the Platte River, which they followed to the mountains. The group returned by way of the Arkansas River and Santa Fe Trail through Kansas, arriving at Fort Leavenworth on September 16 after a three-month trip of more than 1600 miles. One member of the party, Samuel Hunt, died and was buried along the trail in Osage County near the Soldier Creek Crossing.

One post along the Missouri River could do only so much to protect traders on the trail. In 1827, a group of Pawnee attacked a returning party of traders and stole 100 head of mules and other livestock. In 1828, near the present border of Oklahoma and New Mexico, two members of a returning wagon train, Robert McNees and Daniel Munro, having gone ahead of their caravans, were attacked while they slept; McNees died immediately, but Munro died a few days later. Their deaths were revenged later on that return trip when traders killed all but one of a group of American Indians they encountered at the crossing of a small tributary of the North Canadian River. The fact that these slain Indians – the tribe of which is unknown – were within such close proximity to the wagon train seems to indicate they were not the ones who attacked the traders.

The retaliatory killing of American Indians, regardless of guilt, seems to be an occurrence that happened often. The first of six Santa Fe Trail escorts preceding the Mexican-American War was assigned to the Army in 1829. Although the US government’s policing of the trail suggested that every man carry a gun, in 1829 newly elected president Andrew Jackson declared that an escort or outriders should be provided. This first military escort was comprised of Brevet Major Bennet Riley and 200 troops from Companies A, B, F, and H of the 6th US Infantry. Riley’s party hauled a six-pound cannon pulled on a mule-drawn carriage and 20 wagons and four carts of supplies and rations drawn by oxen. This was the first documented use of oxen on the Santa Fe Trail. After rendezvousing with traders at Round Grove in Johnson County, Kansas, the soldiers marched ahead of the civilian freight wagons to the vicinity of Chouteau’s Island in the Arkansas River in Kearny County, Kansas. At that time the river in this vicinity marked the boundary between the United States and Mexico, so the soldiers could not continue the escort farther down the trail. The caravan experienced some conflict with Indians, most likely Comanche or Pawnee, soon after departing from the Arkansas River and continued to experience harassment for the next month until a group of approximately 120 Mexican hunters joined the party. On the return trip, the caravan was escorted by a group of Mexican soldiers.

Soldiers periodically provided escorts for trading parties along the trail during the next several years when the need arose and orders were issued. The second military escort along the Santa Fe Trail was not provided until 1833. In 1832 President Andrew Jackson signed an act to raise a battalion of Mounted Rangers, predecessors of the 1st US Dragoons (later the 1st US Cavalry), for one year. The battalion, consisting of six companies of 110 men each, was under the command of Major Henry Dodge. Captain Matthew Duncan and Company F of the Mounted Rangers reported for duty at Fort Leavenworth in February 1833. One month later, on March 2, 1833, President Jackson authorized raising a regiment of dragoons and discharging the Mounted Rangers. Major Dodge remained as commander of the newly formed dragoon regiment: the 1st US Dragoons. In 1833 Captain William N. Wickliffe, a few 6th US Infantry soldiers, and Captain Matthew Duncan’s company of US Mounted Rangers escorted a caravan to the international border. The following year, a detachment of dragoons under Captain Clifton Wharton provided this service. Among the caravans protected by the dragoons that year was a wagon train composed of 80 wagons, $150,000 worth of trade goods, and 160 men including Josiah Gregg. Later in 1834, a decision was made to eliminate protection of caravans unless a general American Indian war occurred.

A series of Indian Trade and Intercourse acts were enacted between 1790 and 1847 to improve relations with American Indians by granting the United States government sole authority to regulate interactions between Indians and non-Indians. In 1830 Congress passed the Indian Removal Act. As a result, more than 80,000 individuals within tribes residing east of the Mississippi River were forcibly removed to reservations in present-day eastern Kansas and Oklahoma. Within the next few years, Congress passed additional legislation governing Indian-American relations. This included legislation intended to preserve the peace, restrict contacts between Americans and American Indians, regulate trade with Native peoples, and allow the military to enforce the act. A renewal of the Indian Trade and Intercourse Act passed in 1834 designated all US lands west of the Mississippi River (except Louisiana, Missouri, and Arkansas Territory) as Indian Territory. With the exception of the military and missionaries, Americans were precluded from settling on or purchasing Indian lands. Fort Leavenworth soon adopted the added responsibility of protecting the rights of newly relocated tribes in the region. As a result of an 1834 act regulating the Indian Department, Fort Leavenworth also served as a central distribution point for cash annuity disbursements paid to these Indian tribes as established in treaties.

The Republic of Texas

Not until the spring of 1843 was another escort provided along the trail. In the meantime, a new threat to Santa Fe travelers emerged. Texas declared its independence from Mexico in 1836, and the bitter animosities that developed were cause for concern. The Republic of Texas requested annexation by the United States, but President Jackson refused. Texans under the leadership of President Mirabeau B. Lamar, who was elected in 1838, sought recognition of the Republic by the world’s leading powers in the hope that it would force Mexico to acknowledge the Republic’s independence. This acknowledgment was not received, so this group of Texans attempted to expand Texas’ border to the Pacific coast. This made the conquest of New Mexico their first objective. In 1841, a Texan expedition set out for Santa Fe to secure military, political, and economic control over that city despite its stated objective of trade. The members of the expedition were forced to surrender and serve a one-year jail term. The Republic of Texas authorized Jacob Snively and the “Texas Invincibles” to seize, through “honorable warfare,” the goods of Mexican traders that lay within Texas territory. However, the Invincibles’ expedition was to remain an unofficial Texan enterprise of less than 300 men comprising individuals from the Texas government, as well as those selected by Snively. The Mexican government pressed for American protection of the Santa Fe wagon trains while the Mexican president secured safe passage for those trains from the Arkansas River to Santa Fe. 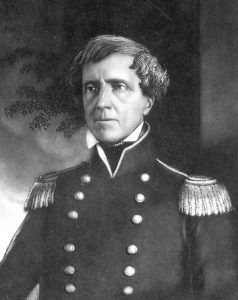 The US government responded by ordering colonels Stephen Watts Kearny and Philip St. George Cooke to furnish escorts once again for the caravans bound to and from Santa Fe. In doing so, US military escorts forced Snively and his followers to surrender. While this alleviated the threat of the ambush of Mexican traders, it meant that Mexico’s earlier fears that the Santa Fe Trail might become an avenue of conquest had now become a reality. Thus, on August 24, 1843, when the fifth military escort accompanying the Santa Fe caravan reached the Arkansas River, Mexican forces, fearing an American takeover, turned out en masse to accompany the caravan for the remainder of the route. With the exception of the 1829 and the 1843 escorts, no Mexican protection was afforded Santa Fe caravans beyond the Upper Canadian River. Upon the return of the 1843 US escort, Colonel Cooke declared that since the Texan threat had been all but eliminated, military escorts were no longer needed.

The first decades of the Santa Fe trade saw a steady use of the 900-mile trail. Mexican and American merchants thrived from the new commercial possibilities of the trade while the Native peoples fought to retain control over their lands and ways of life. The United States’ increasing desire for control led to multiple armed conflicts with American Indians and eventually melted amicable relations between the United States and its newly-independent neighbor to the south. The sixth military escort – led by Colonel Kearny – in May 1845, proved to be foreshadowed the war to come the following year.