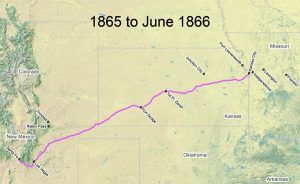 In 1865 Richens Lacy “Uncle Dick” Wootton built a 27-mile toll road over Raton Pass, with a tollgate just north of the Colorado State line. The Colorado Territorial Legislature passed an act to incorporate the Trinidad and Raton Mountain Wagon Road Company on February 20, 1865. Until Wootton built the road, the route across the pass had been in very bad condition and it took five days to travel the 27 miles. The road made 18 steep crossings of Raton Creek. 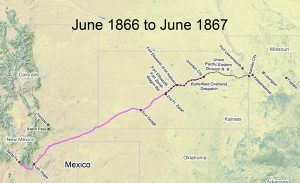 Though the construction of the Union Pacific Railroad began to be built west from the Kansas City area in 1863, the rails didn’t reach Junction City and Fort Riley until June 1866. When it did, he, long wagon trains that had previously formed at Council Grove now formed at Junction City and moved westward over the Smoky Hill route. The Stage Company moved its entire outfit from Council Grove to Junction City. The caravans moved west to Fort Ellsworth; then southwest on a connecting road to Fort Zarah (Great Bend, Kansas); where they resumed the main trail. The long-distance Santa Fe Trail traffic east of Fort Zarah slowed to a trickle. The trail length from Junction City to Santa Fe was 699 miles — 76 miles from Junction City to Fort Ellsworth, 40 miles from Fort Ellsworth to Fort Zarah, and 583 miles from Fort Zarah to Santa Fe. Over the next few years, as the railroad continued to expand westward, the Santa Fe Trail would continue to shorten at its eastern end. Between 1866 and 1867, a cholera epidemic decimated many U.S. cities. About 200 a day died in St. Louis, Missouri during the height of the epidemic.

In 1866, Barlow & Sanderson’s Southern Overland Mail & Express Co. received the mail contract and started running stage service between Kansas City and Santa Fe on a weekly schedule. Home and swing stations were built and the trip took 13 days. The following stage stops along the Mountain Branch were made in the Raton and Springer area of New Mexico: 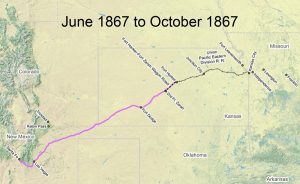 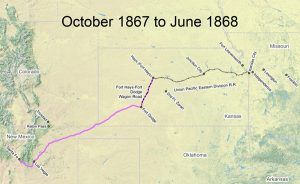 The Union Pacific Railroad reached Hays City (near Fort Hays) in October 1867, after which, wagons and stagecoaches used this point to begin their westward trips. Most long-distance trail traffic stopped east of Fort Dodge, Kansas. The trail length from Hays to Santa Fe was 568 miles: 75 miles from Hays to Fort Dodge and 493 miles from Fort Dodge to Santa Fe, New Mexico. Beginning in the fall of 1867, Barlow, Sanderson and Co. ran stages from Hays City, Kansas to Santa Fe. 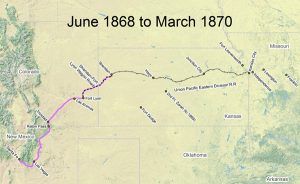 The Union Pacific Railroad tracks reached the town of Sheridan, Kansas in June 1868, and then westbound freight headed southwest over a wagon road to Fort Lyon, Colorado on the main trail. The Cimarron Route was abandoned after June 1868, and most long-distance Mountain Route traffic ceased east of Fort Lyon. The trail length from Sheridan to Santa Fe was 428 miles — 120 miles from Sheridan to Fort Lyon and 308 miles from Fort Lyon to Santa Fe.