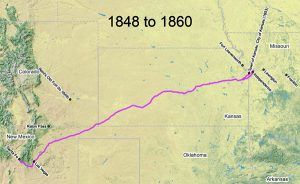 In 1848 the Mexican-American War ended. With the signing of the Treaty of Guadalupe Hidalgo, New Mexico and the surrounding territory was now part of the US Southwest. Military traffic joined commercial traffic along the Santa Fe Trail. The Cimarron Route was again the most commonly-used route to and from Santa Fe, but the Town of Kansas (later Kansas City) had supplanted Independence as the predominant eastern trailhead. Trail length from the Town of Kansas to Santa Fe via the Cimarron Route was 788 miles.

In 1849 the California Gold Rush dramatically increased traffic on the Santa Fe Trail. At that time, Waldo, Hall & Co. held the government contract to carry the United States mail to Santa Fe, a point 700 miles west of the Missouri River. Passenger stage service also began along the trail. Passengers paid $150 for the 25-30 day trip and were required to sleep on the ground at night. The capacity was nine passengers inside and two on top. Some wagons were escorted by an army patrol. The service continued until 1861.

At the same time, new branch trails were established including one from the Missouri border by way of Fort Scott, Kansas, and another from Harrisonville, Missouri, which joined the Santa Fe Trail east of Council Grove, Kansas In 1849 and succeeding years, westbound emigrants in increasing numbers, began to use the trail for other purposes, including taking the Mountain Route to the upper Arkansas River in Colorado and then traveling northward by a trail along the base of the Rocky Mountains to the South Platte River, and to Fort Laramie, Wyoming. 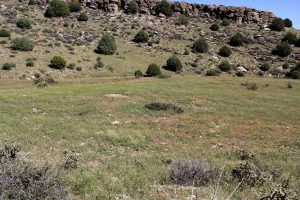 On October 28, 1849, the White Massacre occurred in northeastern New Mexico along the Santa Fe Trail. James White, a merchant who plied his trade between Independence, Missouri and Santa Fe, New Mexico, was traveling west with a wagon train led by a well-known wagon master, Francois X. Aubrey. After the wagon train passed what was considered the dangerous part of the trip, it encamped. White, “a veteran of the trail”, along with his wife Ann, baby daughter, a servant, and several other men decided to separate from the train and advance to Santa Fe alone. After a few days of traveling by themselves, they paused at a well-known landmark called the Point of Rocks. Their camp was Jicarilla Apache warriors, Mr. White and 12 other men were killed, and Mrs. White, her daughter, and her servant were kidnapped. Mrs. White was later also killed. Her daughter and servant were never found. 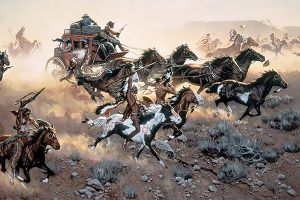 In May 1850, an express stage carrying mail from Fort Leavenworth, Kansas to Santa Fe was attacked by Jicarilla Apache and Mohuache Ute Indians near Santa Clara Spring, New Mexico. All of the messengers were killed in a canyon northwest of Wagon Mound. Indian attacks continued through the mid-1850s.

The gold rush to California brought Asiatic cholera to the Great Plains and by 1850 it was epidemic. In Osage County, Kansas there are unmarked gravesites at Soldier Creek Crossing. The creek was reportedly named after an army unit that suffered heavy losses to cholera at this location in 1851. It is thought these soldiers were part of Brevet Colonel Edwin V. Sumner’s May-June expedition with the First Dragoons, who were headed southwest to establish Fort Union, New Mexico. During their journey, at least 35 men were lost to cholera along the trail on the route between the Kansas River and the crossing of the Arkansas River. However, the vast majority of the Dragoons made it to New Mexico and soon established Fort Union in Mora County to help protect trail commerce.

That same year discovered an alternative to a portion of the Cimarron branch of the trail that avoided the danger of the dry Jornada Del Muerto (Cimarron Desert). Although slightly longer, the alternate route, known as the “Aubry Cutoff“, left the Arkansas River further west near present Syracuse, Kansas. It then joined the original trail at Cold Springs, Oklahoma and continued on past Camp Nichols, Oklahoma before moving on into New Mexico. 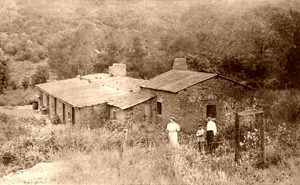 The Majors, Waddell, & Russell Freight Company was hauling along the Cimarron Cutoff in the summer and along the Mountain Branch over Raton in the winter until 1860 when they were caught in Raton Pass in a snowstorm. They had to build cabins and camp there until Spring. Dick Wooton later built his tollgate at the cabin site. 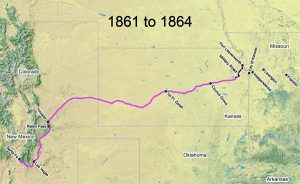 With the coming of the Civil War, the activities of border ruffians east of Council Grove made the trail in eastern Kansas unsafe to travel, so most westbound traffic commenced from Fort Leavenworth, Kansas. Due to dangers from Indian raids, most people traveled over the Mountain Route. The trail length from Fort Leavenworth to Santa Fe was 834 miles — 49 miles on Fort Leavenworth Military Road and 785 miles on the main trail. In 1862, the Battle of Glorieta Pass took place in Northeast New Mexico, holding the southwest for the Union.