The contents of the wagons were soon transferred to the warerooms of the custom-house, and the members of the expedition spent a few days in recovering from the fatigue of their tedious journey; the wagoners and traders repaired in throngs to the numerous fandangoes which were kept up for some time after the arrival of a caravan, while the merchants were actively employed in more important labors, each endeavoring to get his goods through the custom-house before his neighbor and to supply the country dealers on their annual visit to the capital.

“The derechos de arancel (tariff imposts) of Mexico,” to quote again from Gregg, “are extremely oppressive, averaging about 100%, upon the United States’ cost of an ordinary Santa Fe assortment. Those on cotton textures are particularly so. According to the tariff of 1837 — and it was still heavier before — all plain-wove cotton, whether white or printed, paid twelve and a half cents duty yards, besides the derecho de consumo (consumption duty), which brings it up to at least 15. For a few years Governor Armijo, of Santa Fe, established a tariff of his own, entirely arbitrary, — exacting $500 for each wagon load, whether large or small, of fine or coarse goods! Of course, this was very advantageous to such traders as had large wagons and costly assortments, while it was no less onerous to those with smaller vehicles or coarse, heavy goods. As might have been anticipated, the traders soon took to conveying their merchandise only in the largest wagons, drawn by ten or twelve mules, and omitting the coarser and more weighty articles of trade. This caused the governor to return to the ad valorem system, though still without regard to the tariff general of the nation.”

On about the first of September, four or five weeks after the arrival of the caravan, the return trip was commenced; the number of wagons was greatly reduced, many of those taken being sold in the province, and the return cargo —  the profits of the expedition — was of gold-dust or silver bullion, furs, buffalo rugs, wool, and Mexican blankets. The loads weighed generally about 1200 pounds, and while the outward journey occupied at least 70 days, the homeward trip seldom exceeded 40; indeed, in 1851, Frank X. Aubrey, a young Canadian and well-known scout, made the distance from Santa Fe to Independence in five days and ten hours. 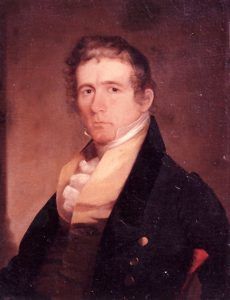 When the trade was well established several petitions were sent to Congress by the people of Missouri, requesting that a road might be marked out and treaties made with the Indian tribes; in January 1825, a bill was passed granting both these requests and appropriating $30,000 for their execution. The work was never completed, however, although energetically begun by the commissioners, Messrs. Reeves, Mathews, and Sibley, and the surveyor, J. C. Brown, who made a treaty with the Osage and commenced the survey. The line of the proposed road was determined as far as the Arkansas River and designated by mounds of earth; but it never seemed to have been used by the travelers, who persistently refused to be carried off from the old trail, which had been the route of their predecessors, and which had the sanction of experience if not of scientific engineering.

The first route followed, as we have seen, was by a line almost directly westward to the mountains of Colorado, and then south to Taos. Afterward, when the trade assumed importance, a road along the Arkansas River, and then southwest to the Raton Pass was sometimes used; but the route which was the ordinary and favorite one for a long series of years was that along the Arkansas River, then across to the Cimarron River, and so entering New Mexico, proceeding in an almost direct line to the Wagon Mound — which made a conspicuous landmark — and then to Las Vegas, San Miguel, and Santa Fe. In the spring of 1837, an attempt was made, principally by Mexican merchants, to establish an independent trade with Chihuahua, leaving Santa Fe entirely out of the intercourse; but, though begun with much enthusiasm, it was found a losing enterprise and speedily abandoned.

The famous scout and Indian fighter Kit Carson first gained his renown by his skill and daring in guiding parties over the Santa Fe Trail, his own first trip having been made as far back as 1826; another well-known scout was Colonel A. G. Boone, grandson of the famous Daniel, who is said to have been able to speak all the Indian languages. Among the early traders and pioneers was James L. Collins, afterward superintendent of Indian affairs in the Territory, who arrived at Santa Fe in 1827, with a caravan of 53 wagons, the largest up to that period. In 1831, Joseph Gregg, whose book, The Commerce of the Prairies, is the authority on all matters pertaining to the trade, made his first trip, and in this same year Captain Jedediah Smith, the well-known Rocky Mountain pioneer, met his death. He had been separated from his party and wandered across the plains in search of water; at last a small stream was found, but as the captain stooped to drink he was pierced by a Comanche arrow and died instantly. In 1833, Charles Bent was captain of the annual caravan, which numbered 93 wagons, and the following year Thomas Kerr commanded an expedition the profits of which amounted to nearly $200,000. Among the traders of 1835 was the celebrated Captain John Sutter, who established himself in business in Santa Fe, leaving that city for California in 1838.

In the early years of the trade there was little trouble from the Indians, but as the proportion of the traffic increased and the annual caravans, the period of their passage, and their value, became known to the natives, many cruel attacks were made, and the Indians were ever prepared to swoop down upon any straggling bands of traders on their homeward journey or small parties insufficiently supplied with arms, who considered themselves fortunate to escape with only the loss of their animals or goods. The first encounter of this kind recorded took place in 1826 when a party of 12 returning traders encamped upon the banks of the Cimarron River with only four guns between them; here they were visited by a band of Indians, who noticed their defenseless condition, and after making friendly demonstrations withdrew, only to return with about 30 warriors, each carrying a lasso. They informed the Americans that they wanted some horses, and the traders, unable to resist so large a force, gave them one apiece. But the Indians were not yet contented, each brave must now have two horses. “Well, catch them!” was the acquiescent reply of the unlucky band; upon which the Indians mounted the animals they had just obtained, and swinging their lassoes over their heads plunged among the stock with furious yells, and drove off the entire herd of 500 head of horses, mules, and asses. The first murder committed by Indians took place in 1826. Two young men, members of a returning party, named McNees and Monroe, having fallen asleep by a stream since known as McNee’s Crossing, were barbarously shot with their own guns in full sight of their caravan. The bodies were buried on the banks of the Cimarron River, and as the companions of the murdered men were engaged in performing these last services a small party of Indians, who probably had no knowledge of the recent outrage, were seen to advance on the opposite side of the stream. The traders, burning with fury and a desire for vengeance, opened fire upon the Indians, all but one of whom were killed. The survivor bore the tidings to his tribe, who, in their turn, pursued the caravan for days and finally succeeded in carrying off 1,000 head of stock, although the traders managed to escape. Not satisfied with this bloodless revenge, the Indians a little later attacked a company of 20 men on their homeward trip, killing one and taking all the animals, thus compelling each of the traders to carry his share of the proceeds on his back to the banks of the Arkansas River, where it was cached until a conveyance to the United States could be procured; these shares amounted to $1,000 each, or a load of 80 pounds in silver bullion to each man. 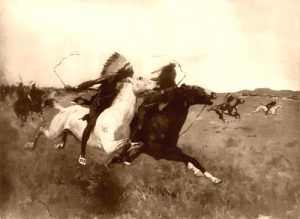 These repeated outrages induced the traders to apply for government protection, and in 1829 a United States escort of three companies of infantry and one of the dragoons under Major Bennet Riley was detailed to accompany the caravan of that year past the most dangerous portions of the route. The escort stopped at Chouteau’s Island, in the Arkansas River, but as soon as the traders advanced without its protection they were attacked by Kiowa warriors and one man was killed, the assailants disappearing in safety before the arrival of the troops, who were at once summoned. Major Riley and his men remained on the Arkansas River until the autumn when they accompanied the returning caravans to Independence. This was the only protection afforded by the United States until 1834, in which year 60 dragoons under Captain Clifton Wharton acted as special escort, and again in 1843 when large detachments under Captain Cooke escorted two different caravans as far as the Arkansas River.

From the time of its re-establishment in 1844 the Santa Fe trade continued without interruption, many wealthy New Mexican merchants taking part in the business. It was not seriously affected by the war with Mexico, for the caravan of 1846, in which year Santa Fe was taken by the United States troops, contained 414 wagons and merchandise to the value of $1,752,250. Under American government the intercourse flourished; not only were the Territories of New Mexico and Arizona supplied, but the northern parts of Mexico also became a market for American goods. With the gradual extension of the railroads, however, the starting-place moved further and further westward, the forwarding establishment being transferred from Hays City, Kansas, to Sheridan, Kit Carson, Granada, La Junta, El Moro, Las Vegas, and so onward until the railroads were in operation throughout the Territory and no other mode of transportation was necessary.

By Helen Haines, excerpted from History of New Mexico: From the Spanish Conquest to the Present Time, 1530-1890, New Mexico Historical Publishing Company, 1891.