The sun was coming up when the Rangers as they crossed the North Gabriel River, 15 miles south of Lampasas. They had ridden 65 miles and had 45 miles yet to go before reaching Round Rock. They halted on the Gabriel River for a breakfast of bread, broiled bacon and black coffee and the horses were fed. After just 30 minutes, they were off again, reaching the vicinity of old Round Rock between 1 and 2 o’clock in the afternoon of Friday, July 19, 1878. The Rangers camped on the banks of Brushy Creek while the lieutenant drove into New Round Rock to report his arrival to General Jones.

Bass had decided to rob the bank at Round Rock on Saturday, the 20th. After his gang had eaten dinner in camp Friday evening they saddled their ponies and started over to town to take a last look at the bank and select a route to follow in leaving the place after the robbery. As they left camp Jim Murphy, knowing that the bandits might be set upon at any time, suggested that he stop at May’s store in Old Round Rock and get a bushel of corn, as they were out of feed for their horses. Bass, Barnes, and Jackson rode on into town, hitched their horses in an alley just back of the bank, passed that building and made a mental note of its situation. They then went up the main street of the town and entered Copprel’s store to buy some tobacco. As the three bandits passed into the store, Deputy Sheriff Moore, who was standing on the sidewalk with Deputy Sheriff Grimes, said he thought one of the newcomers had a pistol.

“I will go in and see,” replied Grimes.

“I believe you have a pistol,” remarked Grimes, approaching Bass and trying to search him.

“Yes, of course, I have a pistol,” said Bass. At the words, the robbers pulled their guns and killed Grimes as he backed away to the door. He fell dead on the sidewalk. They then turned on Moore and shot him through the lungs as he attempted to draw his weapon.

At the crack of the first pistol shot, Dick Ware, who was seated in a barbershop only a few steps away waiting his turn for a shave, rushed into the street and encountered the three bandits just as they were leaving the store. Seeing Ware rapidly advancing on them, Bass and his men fired on the Ranger at close range, one of their bullets striking a hitching post within six inches of Ware’s head and knocking splinters into his face. This assault never halted Ware for an instant. He was as brave as courage itself and never hesitated to take the most desperate chances when the occasion demanded it. For a few minutes, Dick fought the robbers single-handed. General Jones, coming uptown from the telegraph office, ran into the fight. He was armed with only a small Colt’s double action pistol but threw himself into the fray. Connor and Harold had now come up and joined in the fusillade. The general, seeing the robbers on foot and almost within his grasp, drew in close and urged his men to strain every nerve to capture or exterminate the desperadoes. By this time every man in the town that could secure a gun joined in the fight.

The bandits had now reached their horses, and realizing their situation was critical they fought with the energy of despair. If ever a train robber could be called a hero this boy, Frank Jackson, proved himself one. Barnes was shot down and killed at his feet, Bass was mortally wounded and unable to defend himself or even mount his horse while the bullets continued to pour in from every quarter. With heroic courage, Jackson held the Rangers back with his pistol in his right hand while he unhitched Bass’ horse with his left and assisted him into the saddle. Then, mounting his own horse, Jackson and his chief galloped out of the jaws of hell itself. In their flight they passed through Old Round Rock, and Jim Murphy, standing in the door of May’s store, saw Jackson and Bass go by on the dead run. The betrayer noticed that Jackson was holding Bass, pale and bleeding, in the saddle.

Lieutenant Reynolds, entering Round Rock, came within five minutes of meeting Bass and Jackson in the road. Before he reached town he met posses of citizens and Rangers in pursuit of the robbers.

When the fugitives reached the cemetery Jackson halted long enough to secure a Winchester they had hidden in the grass there, then left the road and were lost for a time. The fight was now over and the play spoiled by two over-zealous deputies in bringing on an immature fight after they had been warned to be careful. Naturally, Moore and Grimes should have known that the three strangers were the Sam Bass Gang.

Lieutenant Reynolds started Sergeant Nevill and his Rangers early next morning in search of the flying bandits. After traveling in the direction the robbers were last seen they came upon a man lying under a large oak tree. Seeing the armed Rangers, the man called out to not to shoot, saying he was Sam Bass, the man we were hunting.

After entering the woods the evening before, Bass became so sick and faint from loss of blood that he could go no farther. Jackson dismounted and wanted to stay with his chief, declaring he was a match for all their pursuers.

The wounded leader told his companion to tie his horse near at hand so he could get away if he felt better during the night. Jackson was finally prevailed upon to leave Bass and make his own escape.

When daylight came Saturday morning Bass got up and walked to a nearby house. As he approached the place a lady, seeing him coming holding his pants up and all covered with blood, left her house and started to run off, as she was alone with a small servant girl. Bass saw she was frightened and called to her to stop, saying he was perishing for a drink of water and would return to a tree not far away and lie down if she would only send him a drink. The lady sent him a quart cup of water, but the poor fellow was too far gone to drink it. He was found under this tree one hour later. He had a wound through the center of his left hand, the bullet having pierced the middle finger.

Bass’ death wound was given him by Dick Ware, who used a .45 caliber Colt’s long-barreled six-shooter. The ball from Ware’s pistol struck Bass’ belt and cut two cartridges in pieces and entered his back just above the right hip bone. The bullet badly mushroomed and made a fearful wound that tore the victim’s right kidney all to pieces. From the moment he was shot until his death three days later Bass suffered untold agonies. As he lay on the ground Friday night where Jackson had left him the wounded man tore his undershirt into more than one hundred pieces and wiped the blood from his body.

Bass was taken to Round Rock and given the best of medical attention but died the following day, Sunday, July 21, 1878. While he was yet able to talk, General Jones appealed to Bass to reveal to the state authorities the names of the confederates he had had that they might be apprehended.

“Sam, you have done much evil in this world and have only a few hours to live. Now, while you have a chance to do the state some good, please tell me who your associates were in those violations of the laws of your country.”

Sam replied that he could not betray his friends and that he might as well die with what he knew in him. 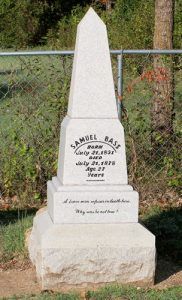 Sam Bass was buried in the cemetery at Old Round Rock. A small monument was erected over his grave by a sister. Its simple inscription reads:

A brave man reposes in death here. Why was he not true?

Frank Jackson made his way back into Denton County and hung around some time hoping to get an opportunity to murder the betrayer of his chief. Jackson declared if he could meet Jim Murphy he would kill him, cut off his head and carry it away in a gunny sack.

Murphy returned to Denton but learned that Jackson was hiding in the Elm Bottoms awaiting a chance to slay him. He thereupon asked permission of the sheriff to remain about the jail for protection. While skulking about the prison one of his eyes became infected. A physician gave him some medicine to drop into the diseased eye, at the same time cautioning him to be careful as the fluid was a deadly poison. Murphy drank the entire contents of the bottle and was dead in a few hours. Remorse, no doubt, caused him to end his life.

The Sam Bass Gang of Texas

About the Article and Author: This article was written by James Buchanan Gillett, a Texas Ranger, author, and rancher. It was included in a book he wrote in 1921 entitled Six Years with The Texas Rangers. The text as it appears here is not verbatim, as it has been added to and heavily edited for corrections and clarifications.