The plotter denied any intention of betraying Bass and offered to take the lead in any robbery Bass should plan and be the first to enter the express car or climb over the bank railing. Bass and Barnes were angry and decided to kill the liar at once. Frank Jackson had taken no part in the conversation, but, he now declared he had known Murphy since he was a little boy, and he was sure Murphy was sincere and meant to stand by them through thick and thin. Bass was not satisfied and insisted that Murphy be murdered then and there.

Jackson finally told Bass and Barnes that they could not kill Murphy without first killing him. Although the youngest of the party at just 22 years old, Jackson had great influence over his chief. He was brave and daring, and Bass at that time could not very well get along without him, so his counsel prevailed and Murphy was spared. The bandits then determined to quit the country. Their plan was to rob a small bank somewhere en route to Mexico and thus secure the funds needed to facilitate their escape, for they were all broke.

Bass, Seaborn Barnes, Frank Jackson, and Jim Murphy left Denton County early in July 1878. With his usual boldness, Bass, after he had passed Dallas County, made no attempt at concealment, but traveled the public highway in broad daylight. Bass and Barnes were still suspicious of Murphy, and never let him out of their sight, though they refused to talk to or to associate with him in any way. When Bass reached Waco the party camped on the outskirts of the town and remained there two or three days. They visited the town each day, looked over the situation, and in one bank saw much gold and currency. Jackson was enthusiastic and wanted to rob it at once. Bass, being more careful and experienced, thought it too hazardous an undertaking, for the run through crowded streets to the outskirts of the city was too far; and so vetoed the attempt.

While in Waco, the gang stepped into a saloon to get a drink. Bass laid a $20 gold piece on the bar and remarked, “There goes the last twenty of the Union Pacific money and d–n little good it has done me.” On leaving Waco the robbers stole a fine mare from a farmer named Billy Mounds and traveled the main road to Belton. They were now out of money and planned to rob the bank at Round Rock, Texas.

General Jones was, by then, getting anxious over the gang. Not a word had been heard from Jim Murphy since he had rejoined the band, for he had been so closely watched that he had had no opportunity to communicate with the authorities, and it seemed as if he would be forced to participate in the next robbery, in spite of himself.

At Belton, Sam sold an extra pony his party had after stealing the mare at Waco. The purchaser demanded a bill of sale as the vendors were strangers in the country. While Bass and Barnes were in a store writing out the required document, Murphy seized the opportunity to dash off a short note to General Jones, saying, “We are on our way to Round Rock to rob the bank. For God’s sake be there to prevent it.” As the post office adjoined the store the traitor succeeded in mailing his letter of betrayal just one minute before Bass came out on the street again. The gang continued their way to Round Rock and camped near the old town, which is situated about one mile north of New Round Rock. The bandits concluded to rest and feed their horses for three or four days before attempting their robbery. This delay was providential, for it gave General Jones time to assemble his Rangers to repel the attack.

After Major Jones was made Adjutant-General of Texas he sent a small detachment of four or five Rangers to camp on the Capitol grounds at Austin. He drew his units from different companies along the line. Each unit would be detailed to camp in Austin, and about every six weeks or two months the detail would be relieved by a squad from another company. It will readily be seen that this was a wise policy, as the detail was always on hand and could be sent in any direction by rail or on horseback at short notice. Besides, General Jones was devoted to his Texas Rangers and liked to have them around where he could see them daily. At that time, four men from Company “E” — Corporal Vernon Wilson and Privates Dick Ware, Chris Connor, and George Harold — were camped at Austin. The corporal helped General Jones as a clerk in his office but was in charge of the squad on the Capitol grounds, slept in camp and had his meals with them. 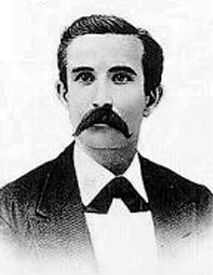 When General Jones received Murphy’s letter he was astonished at Bass’ audacity in approaching within fifteen or twenty miles of the state capital, the very headquarters of the Frontier Battalion, to rob a bank. The letter was written at Belton, Texas, and received at the Adjutant-General’s office on the last mail in the afternoon. The company of Rangers nearest Round Rock was Lieutenant Reynolds’ Company “E,” stationed at San Saba, 115 miles distant. There was no telegraph to San Saba at that time. General Jones reflected a few moments after receipt of the letter and then arranged his plan rapidly.

He turned to Corporal Wilson and told him that Sam Bass and his gang were, or soon would be, at Round Rock, Texas, to rob the bank there.

Corporal Wilson hurried to the livery stable, saddled his horse and got away from Austin on his wild ride just at nightfall. Wilson reached Lampasas at daylight the next morning and made the outgoing stage to San Saba. From Lampasas to San Saba was 50 miles, and it took the stage all day to make the trip. As soon as he landed in town Corporal Wilson hired a horse and galloped three miles down to Lieutenant Reynolds’ camp and delivered his orders.

After dispatching Corporal Wilson to Lieutenant Reynolds, General Jones hurried over to the Ranger camp on the Capitol grounds and ordered the three Rangers, Ware, Connor, and Harold, to proceed to Round Rock, put their horses in Highsmith’s livery stable, and keep themselves concealed until he could reach them himself by train next morning. The following morning General Jones went to Round Rock. He carried with him from Austin, Morris Moore, an ex-Ranger but then deputy sheriff of Travis County. On reaching his destination, the general called on Deputy Sheriff Grimes of Williamson County, who was stationed at Round Rock, told him Bass was expected in town to rob the bank, and that a scout of Rangers would be in town as soon as possible. Jones advised Deputy Grimes to keep a sharp lookout for strangers but on no account to attempt an arrest until the Rangers could arrive. 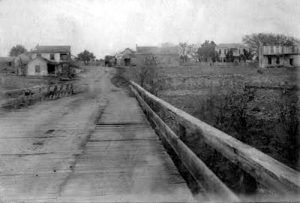 In the meantime, at San Saba, Sergeant Nevill delivered Reynolds’ orders to the Ranger camp, which were brief and to the point: “Bass is at Round Rock. We must be there as early as possible tomorrow. Make a detail of eight men and select those that have the horses best able to make a fast run. And you, with them, report to me here at my tent ready to ride in thirty minutes.”

First Sergeant C. L. Nevill, Second Sergeant Henry McGee, Second Corporal J. B. Gillett, Privates Abe Anglin, Dave Ligon, Bill Derrick, and John R. and W. L. Banister were selected for the detail. Lieutenant Reynolds ordered two of our best little pack mules hitched to a light spring hack, for he had been sick and was not in any condition to make the journey horseback.

In 30 minutes from the time Corporal Wilson reached camp the Rangers were mounted, armed and ready to go. Lieutenant Reynolds took his seat in the hack, threw some blankets in, and Corporal Wilson, who had not had a minute’s sleep for over 36 hours, lay down to get a little rest as we moved along. The Rangers left their camp on the San Saba River just at sunset and traveled in a fast trot the entire night.