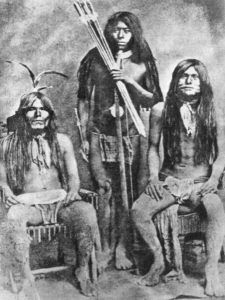 In western Nevada, where the Paiute Indians were on the warpath, several of the stations were little forts, and riders frequently raced for their lives to these adobe sanctuaries. Pony Bob Haslam made his great 380-mile ride across this section of scorching desert.

He rode out of Virginia City one day while the inhabitants were frantically working to fortify the town against war parties whose signal fires were blazing at the time on every peak for 100  miles.

When he arrived at the Carson River, 60 miles away, he found that the settlers had seized all the horses at the station for use in the campaign against the Indians. He went on without a relay down the Carson River to Fort Churchill, 15 miles farther. Here, the man who was to relieve him refused to take the pouches.

Within ten minutes Haslam was in the saddle again. He rode 35 miles to the Carson Sink; got a fresh horse and made the next 30 miles, without a drop of water; changed at Sand Springs and again at Cold Springs; and after 190 miles in the saddle, turned the pouches over to J. G. Kelley.

Here, at Smith’s Creek, Pony Bob got nine hours’ rest. Then he began the return trip. At Cold Springs he found the station a smoking shambles; the keeper and the stock-tender had been killed and the horses were driven off by Indians.

It was growing dark. He rode his jaded animal across the 37-mile interval to Sand Springs, got a remount, and pressed on to the sink of the Carson River. Afterward, it was found that during the night he had ridden straight through a ring of Indians who were headed in the same direction in which he was going. From the sink he completed his round trip of 380 miles without a mishap, arriving at the end within four hours of the scheduled time.

Nine months after the opening of the line, the Civil War began and the Pony Express carried the news of the attack on Fort Sumter from St. Joseph to San Francisco in eight days and 14 hours.

Newspapers and businessmen had awakened to the importance of this quick communication, and bonuses were offered for the delivery of important news ahead of schedule. President Buchanan’s last message had heretofore held the record for speedy passage, going over the route in seven days and 19 hours. But, that time was beaten by two hours in the carrying of President Lincoln’s inaugural address. Seven days and 17 hours — the world’s record for transmitting messages by men and horses!

The firm of Russell, Majors & Waddell spent $700,000 on the Pony Express during the 18 months of its life; they took in something less than $500,000. But, they accomplished what they had set out to do. In 1860 the Butterfield line was notified to transfer its rolling-stock to the west end of the northern route; their rivals got the mail contract for the eastern portion.

The Wells-Butterfield interests were on the underside now. The change to the new route involved enormous expense; and with the withdrawal of troops at the beginning of the Civil War, Apache and Comanche Indians plundered the disintegrating line of stations. The company lasted only a short time on the west end of the overland mail and retired. Its leaders then devoted their energies to the express business. 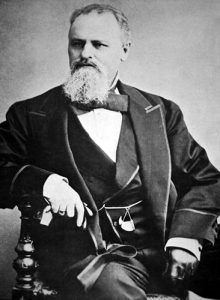 At this juncture, a new man got the mail contract – Ben Holladay. He had begun as a small storekeeper in Weston, Missouri, made one canny turn after another until, at the time when the mail came to the northern route, he owned several steamship lines and large freighting interests and was beginning to embark in the stage business. The firm of Russell, Majors & Waddell was losing money, owing in part to bad financial management and in part, to the courageous venture of the Pony Express. Holladay absorbed their property early in the sixties. He was the transportation magnate of his time, the first American to force a merger in that industry.

One of his initial steps was to improve the operation of the stage line. Some of the efficient methods of his subordinates were picturesque, to say the least. In Julesburg which was near the mouth of Lodge Pole Creek in northeastern Colorado, the agent was an old Frenchman, after whom the place had been named. This Jules had been feathering his own nest at the expense of the company, and the new management supplanted him with one Jack Slade, whose record up to that time was an estimated 19-20 killings. Slade was put in charge of Julesburg with instructions to clean up his division.

While the new superintendent was exterminating such highway robbers and horse-thieves as Jules had gathered about him in this section, his predecessor was biding in the little settlement, watching for a chance to play even. One day Slade came into the general store near the station, and the Frenchman, who had seen a good opportunity for an ambush, fired both barrels of a double-barreled shotgun into his body at a range of about 50 feet.

Slade took to his bed. But, he was made of the stuff which absorbs much lead without any great amount of permanent harm. He was up again in a few weeks. He hunted down Jules, who had taken refuge in the Indian country to the north on hearing of his recovery. He brought the prisoner back to Julesburg and bound him to the snubbing-post in the middle of the stage company’s corral.

Accounts of what followed differ. Some authorities maintained that Slade killed Jules. Others, who based their assertions on the statements of men who said they were eye-witnesses, told how Slade enjoyed himself for some time filling the prisoner’s clothing with bullet holes and then exclaimed, ”Hell! You ain’t worth the lead to kill you.” And turned the victim loose. But, all narrators agree on this; before Slade unbound the living Jules — or the dead one, whichever it may have been — he cut off the prisoner’s ears and put them in his pocket.

It may be noted in passing that this truculent efficiency expert went wrong in years after and wound up his days at the end of a rope in Virginia City, Montana.

Ben Holladay carried the mails overland throughout the early sixties. But, during the summer of 1864 the Indians of the plains, for the first time in their history, made a coalition. They united in one grand war party against the outposts along the line, and for a distance of 400 miles, they destroyed stations, murdered employees, and made off with livestock. The loss to the company was half a million dollars.

It crippled Holladay and the government so delayed consideration of his claims for reimbursement, that he was glad to sell the property. The firm of Wells-Fargo, who had been increasing their express business until they virtually monopolized that feature of common carrying throughout the West at the close of the Civil War, took the line over. It was the old Wells Butterfield Co. again. The first winners in the struggle were the last. 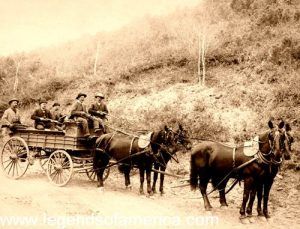 About This Article:  Much of this article was excerpted from the book When the West Was Young by Frederick Ritchie Bechdolt; The Century Co., New York, 1922. However, the text as it appears here is far from verbatim, as it has been heavily edited for clarification, truncated, and updated for the modern reader.

Stagecoaches of the Frontier