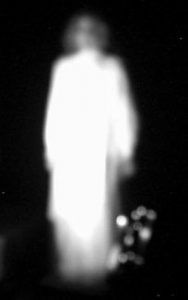 To assert myself and to allay their fears I arose and said to my wife, “Hand me my rifle and I will go down there and shoot that old owl, tree-toad, or whatever it may be.” Leaving my wife and children on the porch, I proceeded to search about in the growing corn, around the barn and all through the nearby underbrush, but without result, although I seemed to be following the voice from point to point. Finally, it seemed to be at the cabin. Hastening there, I found that my family had fled within and had barred the door. Undaunted, I continued the search, following the clues from where I heard the voice. After vain attempts which led me to the roof, around and underneath the cabin, I too was frightened and went into the cabin. There was not much sleep for us that night, for we could hear the cries of our unearthly visitor at frequent intervals, until the early dawn of the morning. Night after night we had much the same experience until we grew accustomed to it and were but little disturbed. Our neighbors joined with us on several occasions to find the mysterious visitor, but despite the most exacting vigils and search, we gave it up, for not one single object or reason could be found that might be suspected of making the nightly occurring sounds, which the neighbors dubbed “The Lost Woman Ghost.”

The summer wore on, succeeded by the bountiful autumn harvests. We should have been happy and content, but the “nightly visitor” had worn on our nerves, so after the harvest had been gathered, I was only too glad to sanction the wife’s suggestion that we go and live with my father down on the Little Blue River, for the winter, as it was too lonesome away up here by ourselves.

We spent the long winter down there, hunting and trapping, returning occasionally to see if everything was all right at our homestead, but never staying overnight, so we did not know if our unwelcome guest had departed or not. With the opening days of spring, we moved back, for our crops needed to be planted and tended, and the first night of our return was celebrated by the usual performance of the unseen voice.

Of course, this was annoying but, what could we do? Then there was no harm resulting, so we settled down, accepting the situation as best we could. Strawberry time came again, and we started out once more to search the hillsides and ravines for the big red berries. Our wanderings brought us to the burial-place of the unknown party of people that we had found a year ago. Here, we stood for a moment with bared heads in reverence, swiftly recalling the incidents of their past as we knew of them, praying that we might in some way learn who they were, so that their relatives might know of their fate, and as we realized the improbability of this, we turned away with dimmed eyes and continued to ascend the hill.

Upon reaching the top, we sat down upon a large flat boulder to rest. The whole panorama lay spread out at our feet, and across the ravine to our right was a hillside almost mountainous in appearance, cut and broken by irregular, rock-filled canyons or gorges, down which, trickling spring-fed streams flowed. The rock-strewn hillside was covered with straggling growths of dwarfed oaks and hackberry trees, with the hill itself rising high to the blue skyline, capped with a heavy ledge of brown sandstone, which was cracked and fissured deeply with dark recesses and many overhanging shelves, which suggested ideal retreats for wild animal life. As we searched with our eyes, every part of its face for some new wonder of formation, a ghastly sight came to our vision – the skeleton of a human being. On closer investigation, we found it to be that of a woman, huddled in a crouched, squatting position, back against the wall of a cavern-like place, seemingly as though she had taken refuge here, only to be found, and had raised her arms to ward off the blow that had stilled her life. Tenderly, we gathered up the bones and carried them down to the burial place, and interred them with the rest, whom we judged to have been her companions. The afternoon was spent in the search for others that might be lying unburied on the hillsides, but the search proved fruitless; our only other find being a few piles of fire-warped wagon-irons and charred woodwork, near which lay bones of oxen, many having the wooden yokes still around their necks. A few arrows were found scattered about in these piles of bones, so we knew that this was the work of Indians.

In the twilight of that evening I sat upon the broad doorstep of our cabin, thinking of all these things, the part that we had played and who these people might have been; then came the thought, could there be any connection between them and the ghostly visitor? If so, perhaps it would give me an answer tonight. Though I waited and meditated long into the night I was in one way disappointed, for the voice did not come that night and never again afterward. So, to me, the mystery has deepened as the years have gone by. Was this the spirit of the murdered woman beseeching me to bury her bones beside those we had previously buried, who no doubt had met a similar fate? I hope so, and if this gave rest to the Soul, let it be the end. 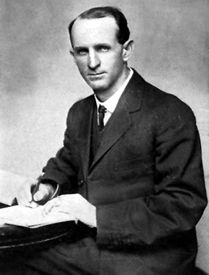 Note: The article, as it appears here, is far from verbatim as it has been edited for clarity, truncated, and updated for the modern reader.