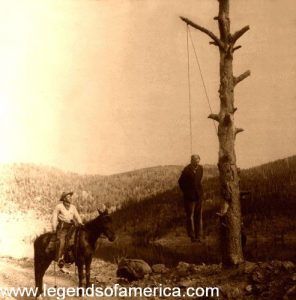 Judge Lynch was well known in Sheridan, and the railroad trestle was a most convenient gallows tree. It was sure to bear monthly, and sometimes daily fruit. On more than one occasion passengers on the cars have drawn back in affright as they beheld staring up at them the face of some Texas Jack, or California Joe who had perished in his sins. Not that Sheridan was, either outwardly or inwardly, moral or law-abiding, but it was generally recognized that there was a limit not to be passed without physical protest. As a rule, morals were rather looked upon as articles of commerce. No one endeavored to possess any unless money was to be made in that way. If any citizen abjured cards, women, and wine, he was pretty certain to have some other game underway which would cost his confiding fellows heavily. But it would be well for him to be far out on the prairie before his victims awoke to the result.

Vengeance was quick and sure, and vigilance juries brought in some queer verdicts in Judge Lynch’s Sheridan court. The chronicler gives one instance where a man, arrested on suspicion, but without evidence enough against him to convict, was indiscreet enough to call the court names. He promptly incurred the following unique sentence: ” This yere court feels herself insulted without due cause, and orders the prisoner strung up for contempt.” And strung up he was.

The town fairly blossomed with ” bad men,” and the crop of ” Bill ” heroes was without apparent end. To be named by doting parents William was to assure any ambitious frontiersman future fame: he became Wild Bill, Apache Bill, or some other Bill by some magic in the atmosphere, a terror to tenderfeet, and generally a blasphemous, swaggering bully and coward. Our friend in Harper’s Magazine thus pictures one such he knew in Sheridan. He was a teamster, named William Hobbs.

“He could not have placed a bullet from his carbine in a barn door at a hundred paces. And yet, without any provocation whatever, he seized upon the word California and wore it, although that wonderful State had never, to my certain knowledge, been favored by his presence. This man had not been cut out for a hero. His becoming one was in direct violation of nature’s laws. He was fat, short of wind, red-faced and timid as a hare. As the frontiersman expressed it, having never lost any Indians he could not be induced by any consideration to find one. However, by lying in wait for tourists and correspondents, he often managed to get business as a guide. He had donned a suit of buckskins made in St. Louis, and would state to the gaping stranger, ‘ My name ‘s California Bill yere; over thar it ‘s ‘Pache, on account o’ my fightin’ the tribe.’ He could not have told one of the latter from a Digger, yet soon the Eastern papers came back with thrilling descriptions of this noted scout and Indian-slayer. But I have known this dead shot, to miss, four times in succession, a bison at fifty yards; and one occasion, having mistaken a Mexican herder for an Indian he fled so fast and far that he lost hat and pistol, and ruined his horse.”

But do not let this incline you to believe there were not real “bad men” in Sheridan. The genuine article was there, and woe to the tenderfoot who thought otherwise.

Both Cody and Hickok, the real Buffalo Bill and Wild Bill, walked those streets, cool, quiet fellows enough, but not the kind of men to play with, unless you wanted to die. And there was another kind as well, the typical frontier desperado, always in liquor and always quarrelsome. Tragedy was in the air, yet it scarcely affected the orderly citizen who was content to attend strictly to his own business. The roughs usually fought it out among themselves. Writes this observer justly:

“In all my residence upon the frontier, during which time sixty-two graves were filled by violence, in no case was the murder otherwise than a benefit to society. The dangerous class killed within its own circle, but never courted justice by shedding better blood. Orderly people looked on with something like satisfaction, as at wolves rending each other. The snarl was the click of a revolver, and the bite followed the bark. These were the men who gloried in snuffing out a candle, or a life, at thirty paces.”

An illustration occurred in the ending of two notorious bullies of Sheridan, known locally as Gunshot Frank and Sour Bill. From some cause unknown these worthies quarreled and decided to fight it out in spectacular fashion, to the delight of the crowd. Each armed himself with a revolver, shouldered a spade, and started off for the ridge.

The plan was for each man to dig a grave for the other, then exchange places, and see which would have to be filled. However, before the work was half done, “Gunshot” made an impudent remark, and Bill promptly plugged him through the abdomen. Balked of a good part of their anticipated enjoyment, the crowd fell upon ” Sour,” and one of them caved in his head with a spade. That night two men slept in the graves dug by their own hands.

Oh, those were great towns, gone forever from the face of the earth, yet lingering in memory! Who, that ever sought sleep in Sheridan’s one hotel, could ever forget the experiment? Hastily constructed, so as to be moved at a moment’s notice, every creak of a bed echoed from wall to wall. The partitions failed to reach the ceilings by a foot or two, and the slightest sound aroused the whole floor. A pistol shot in No. 47 was quite likely to disturb the peaceful slumbers of the occupant of No. 15, and every ” damn ” in the thronged bar-room below caused the lodger to curl up in expectation of a stray bullet coming toward him through the floor. Under the window, a mob howled, and a man in some distant apartment was struggling vainly to draw off his tight boot, skipping about on one foot amid much profanity. That the boot conquered was evident when the fellow crawled into the creaking bed. ” If the landlord wants them boots off, let him come an’ pull ’em.” You could lie there and hear everything that occurred. Every creak and stamp and snore was faithfully reported. Inside was hell; outside was Sheridan.

But it has all passed away; it was a part of the life that was but is no more forever. The “Bills” have gone the way of all flesh, and so has Sheridan. The train pauses an instant even now at the station bearing the name, but there is nothing visible except the solitary house of the railroad section hands. The hotel, the saloons, the shacks have all disappeared, and about stretch the dull, dead Plains. Only up there on the hill, still in their boots, lie those whom the migrating Sheridan left behind in memory of those days that were.

Compiled and edited by Kathy Weiser/Legends of America, updated June 2018.

About the Author: Mushroom Towns of the American West was written by Randall Parrish as a chapter of his book, The Great Plains: The Romance of Western American Exploration, Warfare, and Settlement, 1527-1870; published by A.C. McClurg & Co. in Chicago, 1907. Parrish also wrote several other books including When Wilderness Was King, My Lady of the North, Historic Illinois, and others. 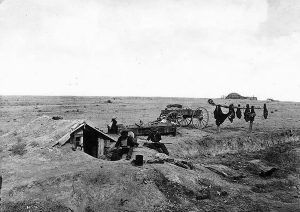 Border Towns of the American West

Struggle For Possession of the West – The First Emigrants

1 thought on “Mushroom Towns of the American West”