We are not concerned with repeating thrilling tales, bloody almost beyond belief, and indicative of incomprehensible depravity in human nature, so much as we are with the causes and effects of this wild civilization which raged here quite alone in the midst of one of the wildest of the western mountain regions. It will best serve our purpose to retain in mind the twofold character of this population, and to remember that the frontier caught to itself not only ruffians and desperadoes, men undaunted by any risk, but also men possessed of a yet steadier personal courage and hardihood. There were men rough, coarse, brutal, murderous; but against them were other men self-reliant, stern, just, and resolved upon fair play.

That was indeed the touchstone of the entire civilization which followed upon the heels of these scenes of violence. It was a fair play that really animated the great Montana Vigilante movement and which eventually cleaned up the merciless gang of Henry Plummer and his associates. The centers of civilization were far removed. The courts were powerless. In some cases, even the machinery of the law was in the hands of these ruffians. But so violent were their deeds, so brutal, so murderous, so unfair, that slowly the indignation of the good men arose to the white-hot point of open resentment and of swift retribution. What the good men of the frontier loved most of all was justice. They now enforced justice in the only way left open to them. They did this as California earlier had done, and they did it so well that there was small need to repeat the lesson.

The actual extermination of the Henry Plummer band occurred rather promptly when the vigilantes once got underway. One of the band by the name of Red Yager, in company with yet another by the name of Brown, had been concerned in the murder of Lloyd Magruder, a merchant of the Territory. The capture of these two followed closely upon the hanging of George Ives, also accused of more than one murder. Ives was an example of the degrading influence of the mines. He was a decent young man until he left his home in Wisconsin. He was in California from 1857 to 1858. When he appeared in Idaho he seemed to have thrown off all restraint and to have become a common rowdy and desperado. It is said of him that “few men of his age ever had been guilty of so many fiendish crimes.” 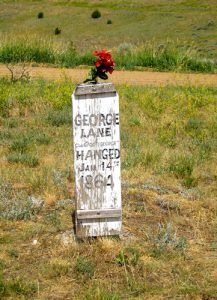 Yager and Brown, knowing the fate which Ives had met, gave up hope when they fell into the hands of the newly organized vigilantes. Brown was hanged; so was Yager; but Yager, before his death, made a full confession which put the vigilantes in possession of information they had never yet been able to secure.

Much has been written and much romanced about the conduct of these desperadoes when they met their fate. Some of them were brave and some proved cowards at the last. For a time, Plummer begged abjectly, his eyes streaming with tears. Suddenly he was smitten with remorse as the whole picture of his past life appeared before him. He promised everything, begged everything, if only life might be spared him — asked his captors to cut off his ears, to cut out his tongue, then strip him naked and banish him. At the very last, however, he seems to have become composed. Stinson and Ray went to their fate alternately swearing and whining. Some of the ruffians faced death boldly. More than one himself jumped from the ladder or kicked from under him the box which was the only foothold between him and eternity. Boone Helm was as hardened as any of them. This man was a cannibal and murderer. He seems to have had no better nature whatever. His last words as he sprang off were “Hurrah for Jeff Davis! Let her rip!” Another man remarked calmly that he cared no more for hanging than for drinking a glass of water. But each after his own fashion met the end foreordained for him by his own lack of compassion, and of compassion, he received none at the hands of the men who had resolved that the law should be established and should remain forever.

There was an instant improvement in the social life of Virginia City, Bannack, and the adjoining camps as soon as it was understood that the vigilantes were afoot. Langford, who undoubtedly knew intimately of the activities of this organization, makes no apology for the acts of the vigilantes, although they did not have back of them the color of the actual law. He says:

“The retribution dispensed to these daring freebooters in no respect exceeded the demands of absolute justice… There was no other remedy. Practically the citizens had no law, but if law had existed it could not have afforded adequate redress. This was proven by the feeling of security consequent upon the destruction of the band. When the robbers were dead the people felt safe, not for themselves alone but for their pursuits and their property. They could travel without fear. They had reasonable assurance of safety in the transmission of money to the States and in the arrival of property over the unguarded route from Salt Lake. The crack of pistols had ceased, and they could walk the streets without constant exposure to danger. There was an omnipresent spirit of protection, akin to that omnipresent spirit of the law which pervaded older and more civilized communities….Young men who had learned to believe that the roughs were destined to rule and who, under the influence of that faith, were fast drifting into crime shrunk appalled before the thorough work of the Vigilantes. Fear, more potent than conscience, forced even the worst of men to observe the requirements of society, and a feeling of comparative security among all classes was the result.”

Naturally, it was not the case that all the bad men were thus exterminated. From time to time there appeared vividly in the midst of these surroundings additional figures of solitary desperadoes, each to have his list of victims, and each himself to fall before the weapons of his enemies or to meet the justice of the law or the sterner need of the vigilantes. It would not be wholly pleasant to read even the names of a long list of these; perhaps it will be sufficient to select one, the notorious Joseph Slade, one of the “picturesque” characters of whom a great deal of inaccurate and puerile history has been written. The truth about Slade is that he was a good man at first, faithful in the discharge of his duties as an agent of the stage company. Needing at times to use violence lawfully, he then began to use it unlawfully. He drank and soon went from bad to worse. At length, his outrages became so numerous that the men of the community took him out and hanged him. His fate taught many others the risk of going too far in defiance of law and decency.

What has been true regarding the camps of Florence, Bannack, and Virginia City, had been true in part in earlier camps and was to be repeated perhaps a trifle less vividly in other camps yet to come. The Black Hills gold rush, for instance, which came after the railroad but before the Indians were entirely cleared away, made a certain wild history of its own. We had our Deadwood stage line then, and our Deadwood City with all its wildlife of drinking, gambling, and shooting — the place where more than one notorious bad man lost his life, and some capable officers of the peace shared their fate. To describe in detail the life of this stampede and the wild scenes ensuing upon it is perhaps not needful here. The main thing is that the great quartz lodes of the Black Hills support in the end a steady, thrifty, and law-abiding population.

All over that West, once so unspeakably wild and reckless, there now rise great cities where recently were scattered only mining-camps scarce fit to be called units of any social compact. It was but yesterday that these men fought and drank and dug their own graves in their own sluices. At the city of Helena, on the site of Last Chance Gulch, one recalls that not so long ago citizens could show with a certain contemporary pride the old dead tree once known as “Hangman’s Tree.” It marked a spot that might be called a focus of the old frontier. Around it, and in the country immediately adjoining, was fought out the great battle whose issue could not be doubted — that between the new and the old days; between law and order and individual lawlessness; between the school and the saloon; between the home and the dance-hall; between society united and resolved and the individual reverted to worse than savagery.

About the Author:  Excerpted from the book The Passing of the Frontier, A Chronicle of the Old West, by Emerson Hough, Yale University Press, 1918. Emerson Hough (1857–1923) was an author and journalist who wrote factional accounts and historical novels of life in the American West. His works helped establish the Western as a popular genre in literature and motion pictures.  For years, Hough wrote the feature “Out-of-Doors” for the Saturday Evening Post and contributed to other major magazines.