There are certain great battles which may at least receive notice, although it would be impossible to mention more than a few of the encounters of the great Indian 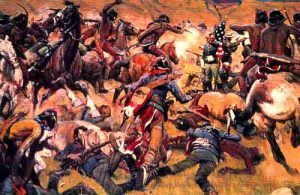 Wars on the buffalo-range at about the time of the buffalo’s disappearance. The Fetterman Massacre in 1866, near Fort Phil Kearny, a post located at the edge of the Big Horn Mountains, was a blow which the Army never has forgotten. “In a place of fifty feet square lay the bodies of Colonel Fetterman, Captain Brown, and sixty-five enlisted men. Each man was stripped naked and hacked and scalped, the skulls beaten in with war clubs and the bodies gashed with knives almost beyond recognition, with other ghastly mutilations that the civilized pen hesitates to record.”

This tragedy brought the Indian problem before the country as never before. The hand of the Western rancher and trader was implacably against the tribesmen of the Plains; the city-dweller of the East, with hazy notions of the character, was disposed to urge lenient methods upon those responsible for governmental policy. While the Sioux and Cheyenne wars dragged on, Congress created, by an act of July 20, 1867, a peace commission of four civilians and three army officers to deal with the hostile tribes. For more than a year, with scant sympathy from the military members, this commission endeavored to remove the causes of friction by amicable conference with the Indian chiefs. The attitude of the Army is reflected in a letter of General Sherman to his brother. “We have now selected and provided reservations for all, off the great roads. All who cling to their old hunting-grounds are hostile and will remain so till killed off. We will have a sort of predatory war for years — every now and then be shocked by the indiscriminate murder of travelers and settlers, but the country is so large, and the advantage of the Indians so great, that we cannot make a single war and end it. From the nature of things, we must take chances and clean out Indians as we encounter them.” 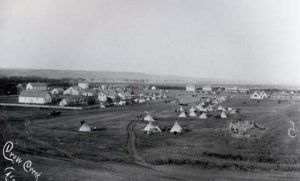 Segregation of the Indian tribes upon reservations seemed to the commission the only solution of the vexing problem. Various treaties were made and others were projected looking toward the removal of the tribesmen from the highways of continental travel. The result was misgiving and increased unrest among the Indians.

In midsummer of 1868 forays occurred at many points along the border of the Indian Territory. General Sheridan, who now commanded the Department of the Missouri, believed that a general war was imminent. He determined to teach the southern tribesmen a lesson they would not forget. In the dead of winter our troops marched against the Cheyenne, then in their encampments below the Kansas line.

The Indians did not believe that white men could march in weather forty below zero, during which they themselves sat in their tepees around their fires; but our cavalrymen did march in such weather, and under conditions such as our cavalry perhaps could not endure today. Among these troops was the Seventh Cavalry, Custer’s Regiment, formed after the Civil War, and it was led by Lieutenant-Colonel George A. Custer himself, that gallant officer whose name was to go into a further and more melancholy history of the Plains.

Custer marched until he got in touch with the trails of the Cheyenne, whom he knew to belong to Black Kettle’s band. He did not at the time know that below them, in the same valley of the Washita, were also the winter encampments of the Kiowa, the Comanche, the Arapaho, and even a few Apache. He attacked at dawn of a bleak winter morning, November 27, 1868, after taking the precaution of surrounding the camp, and killed Black Kettle, and another chief, Little Rock, and over a hundred of their warriors. Many women and children also were killed in this attack. The result was one which sank deep into the Indian mind. They began to respect the men who could outmarch them and outlive them on the range. Surely, they thought, these were not the same men who had abandoned Forts Phil Kearny, C. F. Smith, and Reno. There had been some mistake about this matter. The Indians began to think it over. The result was a pacifying of all the country south of the Platte. The lower Indians began to come in and give themselves up to the reservation life.

One of the hardest of pitched battles ever fought with an Indian tribe occurred in September 1868, on the Arickaree or South Fork of the Republican River, where General “Sandy” Forsyth, and his scouts, for nine days fought over six hundred Cheyenne and Arapaho. These savages had been committing atrocities upon the settlers of the Saline, the Solomon, and the Republican River Valleys, and were known to have killed some 64 men and women at the time General Sheridan resolved to punish them. Forsyth had no chance to get a command of troops, but he was allowed to enlist fifty scouts, all “first-class, hardened frontiersmen,” and with this body of fighting men he carried out the most dramatic battle perhaps ever waged on the Plains.

Forsyth ran into the trail of two or three large Indian villages, but none the less he followed on until he came to the valley of the South Fork. Here the Cheyenne under the redoubtable Roman Nose surrounded him on the 17th of September. The small band of scouts took refuge on a brushy island some 60 yards from shore and hastily dug themselves in under fire.   They stood at bay outnumbered ten to one, with small prospect of escape, for the little island offered no protection of itself, and was in point-blank range from the banks of the river. All their horses soon were shot down, and the men lay in the rifle pits with no hope of escape. Roman Nose, enraged at the resistance put up by Forsyth’s men, led a band of some four hundred of his warriors in the most desperate charge that has been recorded in all our  Indian fighting annals. It was rarely that the  Indian would charge at all; but these tribesmen, stripped naked for the encounter, and led at first by that giant warrior, who came on shouting his defiance, charged in full view not only once but three times in one day, and got within a hundred feet of the foot of the island where the scouts were lying.

According to Forsyth’s report, the Indians came on in regular ranks like the cavalry of the white men, more than four hundred strong. They were met by the fire of repeating carbines and revolvers, and they stood for the first, second, third, fourth, and fifth fire of repeating weapons, and still charged in!

Roman Nose was killed at last within touch of the rifle pits against which he was leading his men. The second charge was less desperate, for the savages lost heart after the loss of their leader. The third one, delivered towards the evening of that same day, was desultory. By that time the bed of the shallow stream was well filled with fallen horses and dead warriors.