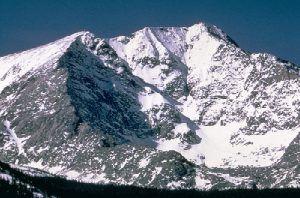 In the recesses of the Rocky Mountains, from Colorado northward through Alberta, and in the depths of the sub-arctic forest beyond the Saskatchewan, there have always been found small numbers of the bison, locally called the mountain  buffalo and wood buffalo; often indeed the old hunters term these animals “bison,” although they never speak of the plains animals save as . They form a slight variety of what was formerly the ordinary plains bison, intergrading with it; on the whole they are darker in color, with longer, thicker hair, and in consequence with the appearance of being heavier-bodied and shorter-legged.

They have been sometimes spoken of as forming a separate species; but, judging from my own limited experience, and from a comparison of the many hides I have seen, I think they are really the same animal, many individuals of the two so-called varieties being quite indistinguishable. In fact, the only moderate-sized herd of wild bison in existence to-day, the protected herd in the Yellowstone Park, is composed of animals intermediate in habits and coat between the mountain and plains varieties — as were all the herds of the Bighorn, Big Hole, Upper Madison, and Upper Yellowstone valleys.

However, the habitat of these wood and mountain bison yielded them shelter from hunters in a way that the plains never could, and hence they have always been harder to kill in the one place than in the other; for precisely the same reasons that have held good with the elk, which have been completely exterminated from the plains, while still abundant in many of the forest fastnesses of the Rockies. Moreover, the bison’s dull eyesight is no special harm in the woods, while it is peculiarly hurtful to the safety of any beast on the plains, where eyesight avails more than any other sense, the true game of the plains being the prong-buck, the most keen-sighted of American animals. On the other hand the bison’s hearing, of little avail on the plains, is of much assistance in the woods; and its excellent nose helps equally in both places. 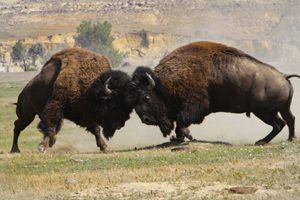 Though it was always more difficult to kill the bison of the forests and the mountains than the bison of the prairie, yet now that the species is, in its wild state, hovering on the brink of extinction, the difficulty is immeasurably increased. A merciless and terrible process of natural selection, in which the agents were rifle-bearing hunters, has left as the last survivors in a hopeless struggle for existence only the wariest of the bison and those gifted with the sharpest senses. That this was true of the last lingering individuals that survived the great slaughter on the plains is well shown by Mr. Hornaday in his graphic account of his campaign against the few scattered buffalo which still lived in 1886 between the Missouri and the Yellowstone, along the Big Dry. The bison of the plains and the prairies have now vanished; and so few of their brethren of the mountains and the northern forests are left, that they can just barely be reckoned among American game; but whoever is so fortunate as to find any of these animals must work his hardest, and show all his skill as a hunter if he wishes to get one.

In the fall of 1889 I heard that a very few bison were still left around the head of Wisdom river. Thither I went and hunted faithfully; there was plenty of game of other kind, but of bison not a trace did we see. Nevertheless a few days later that same year I came across these great wild cattle at a time when I had no idea of seeing them.

It was, as nearly as we could tell, in Idaho, just south of the Montana boundary line, and some twenty-five miles west of the line of Wyoming. We were camped high among the mountains, with a small pack-train. On the day in question we had gone out to find moose, but had seen no sign of them, and had then begun to climb over the higher peaks with an idea of getting sheep. The old hunter who was with me was, very fortunately, suffering from rheumatism, and he therefore carried a long staff instead of his rifle; I say fortunately, for if he had carried his rifle it would have been impossible to stop his firing at such game as bison, nor would he have spared the cows and calves.

About the middle of the afternoon we crossed a low, rocky ridge, above timber line, and saw at our feet a basin or round valley of singular beauty. Its walls were formed by steep mountains. At its upper end lay a small lake, bordered on one side by a meadow of emerald green. The lake’s other side marked the edge of the frowning pine forest which filled the rest of the valley, and hung high on the sides of the gorge which formed its outlet. Beyond the lake the ground rose in a pass evidently much frequented by game in bygone days, their trails lying along it in thick zigzags, each gradually fading out after a few hundred yards, and then starting again in a little different place, as game trails so often seem to do.

We bent our steps toward these trails, and no sooner had we reached the first than the old hunter bent over it with a sharp exclamation of wonder. There in the dust were the unmistakable hoof-marks of a small band of bison, apparently but a few hours old. They were headed towards the lake. There had been a half a dozen animals in the party; one a big bull, and two calves.

We immediately turned and followed the trail. It led down to the little lake, where the beasts had spread and grazed on the tender, green blades, and had drunk their fill. The footprints then came together again, showing where the animals had gathered and walked off in single file to the forest. Evidently they had come to the pool in the early morning, walking over the game pass from some neighboring valley, and after drinking and feeding had moved into the pine forest to find some spot for their noontide rest.

It was a very still day, and there were nearly three hours of daylight left. Without a word my silent companion, who had been scanning the whole country with hawk-eyed eagerness, besides scrutinizing the sign on his hands and knees, took the trail, motioning me to follow. In a moment we entered the woods, breathing a sigh of relief as we did so; for while in the meadow we could never tell that the <style=”margin-top: 0; margin-bottom: 0″> buffalo might not see us, if they happened to be lying in some place with a commanding lookout.

The old hunter was thoroughly roused, and he showed himself a very skilful tracker. We were much favored by the character of the forest, which was rather open, and in most places free from undergrowth and down timber. As in most Rocky Mountain forests the timber was small, not only as compared to the giant trees of the groves of the Pacific coast, but as compared to the forests of the northeast. The ground was covered with pine needles and soft moss, so that it was not difficult to walk noiselessly. Once or twice when I trod on a small dry twig, or let the nails in my shoes clink slightly against a stone, the hunter turned to me with a frown of angry impatience; but as he walked slowly, continually halting to look ahead, as well as stooping over to examine the trail, I did not find it very difficult to move silently. I kept a little behind him, and to one side, save when he crouched to take advantage of some piece of cover, and I crept in his footsteps. I did not look at the trail at all, but kept watching ahead, hoping at any moment to see the game.