One morning my cousin and brother had been left in camp as guards. They were sitting idly warming themselves in the first sunbeams, when their attention was sharply drawn to four buffaloes that were coming to the pool to drink. The beasts came down a game trail, a deep rut in the bluff, fronting where they were sitting, and they did not dare to stir for fear of being discovered. The buffaloes walked into the pool, and after drinking their fill, stood for some time with the water running out of their mouths, idly lashing their sides with their short tails, enjoying the bright warmth of the early sunshine; then, with much splashing and the gurgling of soft mud, they left the pool and clambered up the bluff with unwieldy agility. As soon as they turned, my brother and cousin ran for their rifles, but before they got back the buffaloes had crossed the bluff crest. Climbing after them, the two hunters found, when they reached the summit, that their game, instead of halting, had struck straight off across the prairie at a slow lope, doubtless intending to rejoin the herd they had left. After a moment’s consultation the men went in pursuit, excitement overcoming their knowledge that they ought not, by rights, to leave camp.

They struck a steady trot, following the animals by sight until they passed over a knoll, and then trailing them. Where the grass was long, as it was for the first four or five miles, this was a work of no difficulty, and they did not break their gait, only glancing now and then at the trial. As the sun rose and the day became warm, their breathing grew quicker; and the sweat rolled off their faces as they ran across the rough prairie sward, up and down the long inclines, now and then shifting their heavy rifles from one shoulder to the other. But they were in good training, and they did not have to halt. At last they reached stretches of bare ground, sun-baked and grassless, where the trail grew dim; and here they had to go very slowly, carefully examining the faint dents and marks made in the soil by the heavy hoofs, and unraveling the trail from the mass of old footmarks. It was tedious work, but it enabled them to completely recover their breath by the time that they again struck the grassland; and but a few hundred yards from the edge, in a slight hollow, they saw the four buffaloes just entering a herd of fifty or sixty that were scattered out grazing. The herd paid no attention to the new-comers, and these immediately began to feed greedily. After a whispered consultation, the two hunters crept back, and made a long circle that brought them well to leeward of the herd, in line with a slight rise in the ground. They then crawled up to this rise and, peering through the tufts of tall, rank grass, saw the unconscious beasts a hundred and twenty-five or fifty yards away. They fired together, each mortally wounding his animal, and then, rushing in as the herd halted in confusion, and following them as they ran, impeded by numbers, hurry, and panic, they eventually got three more. 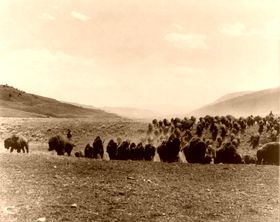 On another occasion the same two hunters nearly met with a frightful death, being overtaken by a vast herd of stampeded buffaloes. All the animals that go in herds are subject to these instantaneous attacks of uncontrollable terror, under the influence of which they become perfectly mad, and rush headlong in dense masses on any form of death. Horses, and more especially cattle, often suffer from stampedes; it is a danger against which the cowboys are compelled to be perpetually on guard. A band of stampeded horses, sweeping in mad terror up a valley, will dash against a rock or tree with such violence as to leave several dead animals at its base, while the survivors race on without halting; they will overturn and destroy tents and wagons, and a man on foot caught in the rush has but a small chance for his life.

A buffalo stampede is much worse — or rather was much worse, in the old days — because of the great weight and immense numbers of the beasts, which, in a fury of heedless terror, plunged over cliffs and into rivers, and bore down whatever was in their path. On the occasion in question, my brother and cousin were on their way homeward.

They were just mounting one of the long, low swells, into which the prairie was broken, when they heard a low, muttering, rumbling noise, like far-off thunder. It grew steadily louder, and, not knowing what it meant, they hurried forward to the top of the rise. As they reached it, they stopped short in terror and amazement, for before them the whole prairie was black with madly rushing buffaloes.

Afterward they learned that another couple of hunters, four or five miles off, had fired into and stampeded a large herd. This herd, in its rush, gathered others, all thundering along together in uncontrollable and increasing panic.

The surprised hunters were far away from any broken ground or other place of refuge, while the vast herd of huge, plunging, maddened beasts was charging straight down on them not a quarter of a mile distant. Down they came! — thousands upon thousands, their front extending a mile in breadth, while the earth shook beneath their thunderous gallop, and, as they came closer, their shaggy frontlets loomed dimly through the columns of dust thrown up from the dry soil. The two hunters knew that their only hope for life was to split the herd, which, though it had so broad a front, was not very deep. If they failed they would inevitably be trampled to death.

Waiting until the beasts were in close range, they opened a rapid fire from their heavy breech-loading rifles, yelling at the top of their voices. For a moment the result seemed doubtful. The line thundered steadily down on them; then it swayed violently, as two or three of the brutes immediately in front fell beneath the bullets, while their neighbors made violent efforts to press off sideways. Then a narrow wedge-shaped rift appeared in the line, and widened as it came closer, and the buffaloes, shrinking from their foes in front, strove desperately to edge away from the dangerous neighborhood; the shouts and shots were redoubled; the hunters were almost choked by the cloud of dust, through which they could see the stream of dark huge bodies passing within rifle-length on either side; and in a moment the peril was over, and the two men were left alone on the plain, unharmed, though with their nerves terribly shaken. The herd careered on toward the horizon, save five individuals which had been killed or disabled by the shots.

On another occasion, when my brother was out with one of his friends, they fired at a small herd containing an old bull; the bull charged the smoke, and the whole herd followed him. Probably they were simply stampeded, and had no hostile intention; at any rate, after the death of their leader, they rushed by without doing any damage.