The first deadly affray that took place in our town, after the cattlemen came in and regular settlement began, was between a Scotchman and a Minnesota man, the latter being one of the small stockmen. Both had “shooting” records, and each was a man with a varied past. The Scotchman, a noted bully, was the more daring of the two, but he was much too hot-headed and overbearing to be a match for his gray-eyed, hard-featured foe. After a furious quarrel and threats of violence, the Scotchman mounted his horse, and, rifle in hand, rode to the door of the mud ranch, perched on the brink of the river bluff, where the American lived and was instantly shot down by the latter from behind a corner of the building.

Later on, I once opened a cowboy ball with the wife of the victor in this contest, the husband himself dancing opposite. It was the lanciers, and he knew the steps far better than I did. He could have danced the minuet very well with a little practice. The scene reminded one of the balls where Bret Harte’s heroine “danced down the middle with the man who shot Sandy Magee.”

But though there were plenty of men present each of whom had shot his luckless Sandy Magee, yet there was no Lily of Poverty Flat. There is an old and true border saying that “the frontier is hard on women and cattle.” There are some striking exceptions; but, as a rule, the grinding toil and hardship of a life passed in the wilderness, or on its outskirts, drive the beauty and bloom from a woman’s face long before her youth has left her. By the time she was a mother, she is sinewy and angular, with thin, compressed lips and furrowed sallow brow. But she has a hundred qualities that atone for the grace she lacks. She is a good mother and a hard-working housewife, always putting things to rights, washing, and cooking for her stalwart spouse and offspring. She is faithful to her husband, and, like the true American that she is, exacts faithfulness in return. Peril cannot daunt her, nor hardship and poverty appall her. Whether on the mountains in a log hut chinked with moss, in a sod or adobe hovel on the desolate prairie, or in a mere temporary camp, where the white-topped wagons have been drawn up in a protection-giving circle near some spring, she is equally at home. Clad in a dingy gown and a hideous sun-bonnet she goes bravely about her work, resolute, silent, and uncomplaining. The children grow up pretty much as fate dictates. Even when very small they seem well able to protect themselves. The wife of one of my teamsters, who lived in a small outlying camp, used to keep the youngest and most troublesome members of her family out of mischief by the simple expedient of picketing them out, each child being tied by the leg, with a long leather string, to a stake driven into the ground, so that it could neither get at another child nor at anything breakable.

The best buckskin maker I ever met was, if not a typical frontiers-woman, at least a woman who could not have reached her full development save on the border. She made first-class hunting-shirts, leggings, and gauntlets. When I knew her she was living alone in her cabin on mid-prairie, having dismissed her husband six months previously in an exceedingly summary manner. She not only possessed redoubtable qualities of head and hand but also a nice sense of justice, even towards Indians, that is not always found on the frontier. Once, going there for a buckskin shirt, I met at her cabin three Sioux, and from their leader, named One Bull, purchased a tobacco-pouch, beautifully worked with porcupine quills. She had given them some dinner, for which they had paid with a deer-hide. Falling into the conversation, she mentioned that just before I came up a white man, apparently from Deadwood, had passed by, and had tried to steal the Indians’ horses. The latter had been too quick for him, had run him down, and brought him back to the cabin. “I told ’em to go right on and hang him, and I wouldn’t never cheep about it,” said my informant; “but they let him go, after taking his gun. There ain’t no sense in stealing from Indians any more than from white folks, and I ‘m not going to have it round my ranch, neither. There! I ‘ll give ’em back the deer-hide they give me for the dinner and things, anyway.” I told her I sincerely wished we could make her sheriff and Indian agent. She made the Indians — and whites, too, for that matter — behave themselves and walk the straightest kind of line, not tolerating the least symptom of rebellion; but she had a strong natural sense of justice. 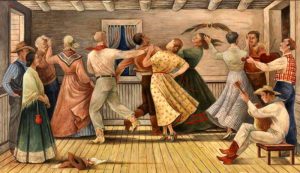 The cowboy balls, spoken of above, are always great events in the small towns where they take place, being usually given when the round-up passes near; everybody round about comes in for them. They are almost always conducted with great decorum; no unseemly conduct would be tolerated. There is usually some master of the ceremonies, chosen with due regard to brawn as well as brain. He calls off the figures of the square dances, so that even the inexperienced may get through them, and incidentally preserves order. Sometimes we are allowed to wear our revolvers, and sometimes not. The nature of the band, of course, depends upon the size of the place. I remember one ball that came near being a failure because our half-breed fiddler “went and got himself shot,” as the indignant master of the ceremonies phrased it

But all these things are merely incidents in the cowboy’s life. It is utterly unfair to judge the whole class by what a few individuals do in the course of two or three days spent in town, instead of by the long months of weary, honest toil common to all alike. To appreciate properly his fine, manly qualities, the wild rough-rider of the plains should be seen in his own home. There he passes his days, there he does his life-work, there, when he meets death, and he faces it as he has faced many other evils, with quiet, uncomplaining fortitude. Brave, hospitable, hardy, and adventurous, he is the grim pioneer of our race; he prepares the way for the civilization from before whose face he must himself disappear. Hard and dangerous though his existence is, it has yet a wild attraction that strongly draws to it his bold, free spirit. He lives in the lonely lands where mighty rivers twist in long reaches between the barren bluffs; where the prairies stretch out into billowy plains of waving grass, girt only by the blue horizon, — plains across whose endless breadth he can steer his course for days and weeks and see neither man to speak to nor hill to break the level; where the glory and the burning splendor of the sunsets kindle the blue vault of heaven and the level brown earth till they merge together in an ocean of flaming fire.

Which is the badman?

By Theodore Roosevelt, 1888. Compiled and edited by Kathy Weiser/Legends of America, updated December 2019.

Frontier Types was written by Theodore Roosevelt and excerpted from his book Ranch Life and the Hunting-Trail, published in 1888. In addition to Roosevelt’s active military and political career, including President of the United States, he was an avid writer, publishing several books and articles during his lifetime.

I am old fashioned, or sentimental, or something about books! Whenever I read one I want, in the first place, to enjoy myself, and, in the next place, to feel that I am a little better and not a little worse for having read it.