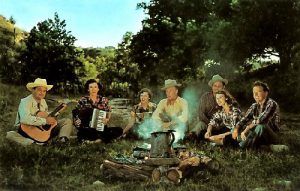 Mix well adding bread crumbs to produce a dense meatloaf.  Place in a #10 Dutch oven that has been sprayed well with a non stick spray.  Cover and cook for about 30 min or until almost done.

While that is cooking, mix 2 boxes of cornbread mix according to the instructions given and add the following:

Remove meat from oven and carefully drain off any liquid. Pour cornbread mixture over the top of the meat and return to oven for approximately 20 min.  Watch this carefully.  Check for doneness with a toothpick.

Roll dough out on a floured surface to ½ inch thickness. Cut into 2 ½ inch circles.

Melt 1/4 pound of butter in a deep 14″ Dutch oven. Do not let butter get too hot. Dip circles of dough in butter, coating both sides. Lay circles of dough on inside edge of Dutch oven, overlapping approximately one third. Place the second layer of dough circles like shingles inside the first ring.

Cook with 11 briquets on the bottom of each oven and 15-20 briquets placed around the outer rim of each lid. Bake for about 25 minutes. Remove the ovens from the bottom briquets and finish cooking with top heat only for approximately 10-15 minutes more. When finished remove from Dutch oven and serve warm.

Garlic Parmesan Monkey — Bread Follow above recipe adding ½ teaspoon garlic power to the melted butter in the Dutch oven. After circles of dough are placed in the Dutch oven sprinkle the top with ¾ cup Parmesan cheese.

Combine evaporated milk and eggs in bowl. Pour into oven and scramble until soft curds form. Move eggs to center of oven. Arrange vegetables around eggs. Sprinkle cheese over eggs and vegetables.

Serve with tortillas. Garnish as desired.

The Chuck Wagon – The Real Queen of the Cattle Trail

Back to Dutch Oven Menu