The drover secured, besides camp equipage and eatables, about eight men to 1,000 cattle as drivers, and from six to ten horses to the man, according to the quality of the equines. After 1883-84, when Indians were less dangerous and fewer herds were on the trails, four to six men to 1000 head were considered sufficient. Having “cut-out” the cattle one by one with lassoes (long rawhide ropes attached to the cowboys’ saddles and thrown with great accuracy by the riders), the steers and cows all received a “road brand,” a supplementary mark to prevent confusion on the way to market. All was then ready for the long march.

Spring was the usual starting time, and during the seasons of the large drives — May, June, July, and August, saw almost a solid procession passing over the great trails. So near were the herds that the drivers could hear one another urging along the stock, and frequently, even the utmost care could not prevent two companies stampeding together, entailing a loss of much time and labor in separating them.

Once started, it was remarkable the orderly manner in which a herd took its way across the plains. A herd of a thousand beeves would string out to a length of two miles, and a larger one still longer. It made a picturesque sight. The leaders were flanked by cowboys on wiry Texas ponies, riding at ease in great saddles with high backs and pommels. At regular distances were other riders, and the progress of the cavalcade was not unlike that of an army on a march. There was an army-like regularity about the cattle’s movements, too. The leaders seemed always to be especially fitted for the place, and the same ones would be found in the front rank throughout the trip, while others retained their relative positions in the herd day after day.

At the start, there was hard driving, 20-30 miles a day, until the animals were thoroughly wearied. After that, 12-15 miles was considered a good day’s drive, thus extending the journey over 40 to 100 days. The daily program was as regular as that of a regiment on the march. From morning until noon, the cattle were allowed to graze in the direction of their destination, watched by the cowboys in relays. The cattle, by this time, were uneasy and were turned into the trail and walked steadily forward eight or ten miles, when, at early twilight, they were halted for another graze. As darkness came on, they were gathered closer and closer into a compact mass by the cowboys riding steadily in constantly lessening circles around them, until at last, the brutes lay down, chewing their cuds and resting from the day’s trip. Near midnight they would usually get up, stand awhile and then lie down again, having changed sides. At this time, extra care was necessary to keep them from aimlessly wandering off in the darkness. Sitting on their ponies, or riding slowly round and round their reclining charges, the cowboys passed the night on sentinel duty, relieving one another at stated hours. 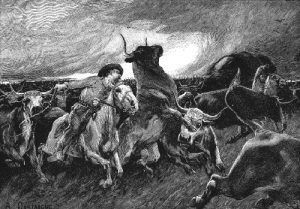 When skies were clear and the air bracing, the task of cattle driving was a pleasant and healthful one. But there came rainy days, when the cattle were restless, and when it was anything but enjoyable riding through the steady downpour. Then especially were the nights wearisome, and the cattle were ready at any time to stampede.

No one could tell what caused a stampede, any more than one can tell the reason of the strange panics that attack human gatherings at times. A flash of lightning, a crackling stick, a wolf’s howl, little things in themselves, but in a moment, every horned head was lifted, and the mass of hair and horns, with fierce, frightened eyes gleaming like thousands of emeralds, was off. Recklessly, blindly, in whatever direction fancy led them, they went, over a bluff or into a morass, it mattered not, and fleet were the horses that could keep abreast of the leaders. But some could do it, and lashing their ponies to their best gait the cowboys followed at break-neck speed. Getting one side of the leaders the effort was to turn them, a little at first, then more and more, until the circumference of a great circle was being described.

The cattle behind blindly followed, and soon the front-rear joined and “milling” commenced. Like a mighty mill-stone, round and round the bewildered creatures raced until they were wearied out or recovered from their fright.

To stop the herd from milling, after a stampede or when in the cattle yards at the end of the trip, was a necessary but difficult task. As in a stampede, it was death to an animal who failed to keep up with his comrades, for in a moment his carcass would be flattened by thousands of trampling hoofs. The human voice seemed the most powerful influence that could be used to affect the brutes, force being entirely out of the question. As soon as the “milling” began the cowboys began to sing. It mattered not what so long as there was music to it, and it was not uncommon to hear some profane and heartless bully doling out camp-meeting hymns to soothe the ruffled spirits of a herd of Texas steers, a use which might have astonished the fathers and mothers of the churches “back in God’s country,” could they have known of it. 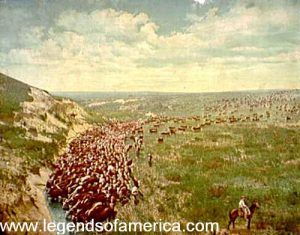 A stampede always meant a loss and rendered the herd more likely to be again panic-stricken. Certain hysterical leaders were frequently shot because of their influence on the remainder of the column. Another danger was that of the mingling of two herds; while in the earlier days, the presence of buffalo was a decided peril. A herd of buffalo roaring and tearing its way across the plain was almost certain to cause a panic, if within hearing, and outriders were necessary to watch for these enemies and turn their course from the trail. Besides, marauding Indians were always to be feared, and many a skirmish was had between the cowboys and the Native Americans. An understanding with the chiefs was, however, usually sufficient to ensure safety. Thus accompanied by incidents that brought into play all the strength and strategy of their guards, the horned host moved on. Rivers were crossed by swimming in the same order that had been followed on land.

Reaching the outskirts of the shipping-station, the herd was held on the plains until the drover effected a sale or secured cars for shipment. Then the animals were driven into the stockades, dragged or coaxed into the cars, and were sent off to meet their fate in the great packing-houses. The journey had been a strange one to them, often accompanied by savage cruelties and the hands of heartless drivers, and the end of the trip with close confinement of yard and car, the first they had ever known, was strangest of all.

With the loading of the cattle came the “paying off” and the cowboy’s brief vacation before returning to another year’s round of hard work and coarse fare. It was not, perhaps, to be expected that after nearly a twelvemonth of life on the prairies he should spend his outing in quiet and dignity. And seldom did he. The cattle towns catered to his worst passions, and saloons and dance-houses flourished with startling exuberance. Gambling ran riot, and quarrels ending in murder were of frequent occurrence. During the height of the season might was the only law, and if occasionally a marshal was found, like William Hickok, the original Wild Bill, who could rule an Abilene in its rudest period, it was because he was quicker with the revolver and more daring than even the cowboys themselves.