Over the years Lilly occasionally trapped for the Biological Survey as well as the U. S. Forest Service…. but a company job with requirements, schedules and restrictions fit him about like a size ten collar on a size fourteen neck! His supervisors and handlers never fully understood their ace hunter’s motivations. After all, he wasn’t just another bankrupted cowboy looking to make a buck, or a wayward husband avoiding entanglement or litigation back home. “You are condemned, you black devil,” Lilly once shouted, before piercing a bear with his knife tied to a pole. “I kill you in the name of the law!” Ben was passionately committed to what he believed to be a God-sent mission, a holy war of sorts against bears and lions: the equivalent of the barbarian hordes of the Bible, threatening the security and industry of the human race.

On the wall of the 3-Trees Guns Shop in Reserve visitors can see the mounted head of what is considered to be the last grizzly killed in this state, in the Summer of 1915. She was taken a short way from here by Bailey Hulsey using a Winchester 1886 .40-65, in what we usually call Bishop Canyon. While not the biggest of specimens, she still looms large in the imagination. She was– like Lilly himself– the last of her kind. Glass eyes blazing, mouth open in a permanent snarl, she represents for New Mexicans an end to competition from a breed of creature we’ve been violently contending with since the earliest prehistoric battles for a habitable cave.

Bergen Riddle is one of my backwoods neighbors, living as he does a mere ten miles over the hill (as the crow flies). To this day if he hunts his hounds at all he does so on foot, the old way. He’s quick to point out how many bear and lion an outfitter with a pack can take out of the woods annually, driving his dogs down dirt logging roads on the platform of his truck until they cut scent where one of the keynote predators had crossed the road.

Then all they have to do is release the pack, pay attention to the signals from the dogs’ radio collars, and then drive as close as possible to where their quarry ends up treed. In comparison, Lilly’s record kill of ninety-eight bears in a single year is notable, if not exactly restrained. One has to take into account that the aging huntsman walked his hounds on their hunt for scent, and then walked or ran to catch up with them once they were off and baying on a hot track.

Like the gunfighter John Wesley Hardin, Ben Lilly was a man of distinction and contradiction in a time of compliance and change. When he took refuge in solitude and wildness it was not only from society’s hypocrisy and oppression but from his own deep personal ambivalence and unresolved issues. 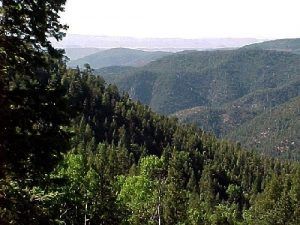 Some hundred and fifty years earlier Daniel Boone suffered a constant itch to move on. As quickly as he’d help settle a new region, subdue the native Indians and make it safe for settlers, he’d start complaining of having no “elbow room” and soon head West again. The “mountain men” trappers of the 1830s through the 1850s were often hired by government surveyors and engineers for the railroads, inadvertently inviting in the very crowds and domestic lifestyles that they’d left Albany or St. Louis to avoid. Another, less free way of living hounded Lilly’s tracks even as he was hot on the trail of bears and visions.

Had Lilly been asked to define himself in a single word, it would no doubt have been “hunter.” He hunted for lion and bear, for food and for fun. He hunted for personal resolution and reconciliation, for untamed places and a sense of purpose as well as peace.

It was still fairly early in the 20th Century when a sensitive young man with an artist’s soul, Everett Ruess, disappeared forever on one of his many burro treks out West. His body was never found, leaving us unclear if his death was accidental or a homicide…. or if he simply took off with no intention of coming back. Unlike with Ruess, few tears were shed– when old Ben Lilly passed away in bed. I’m sure he would have rather perished on a hunt, exhausted beyond measure in a Herculean effort to keep up with the pack. Or he might have preferred to have the tables suddenly turned, and find himself the feast– filling both the belly and the heart of some great warrior of a beast.

Towards the end of his life, he spent considerable time at the G.O.S. Ranch, but by 1931 he was largely incapable of focus, let alone of hunting. He whiled away his final days on Mary Hines “county farm” on Big Dry Creek, forty miles south of here near the still small town of Pleasanton. Benjamin Lilly passed away on December 17, 1936, telling Ms. Hines “I believe I’ll stay in bed today.” There is certainly something ironic about the man who hated sleeping indoors spending his last hours between the sheets…. that one who courted and encountered so many mortal threats should die with his “boots off” instead. We’re reminded of volatile gunslinger Doc Holiday’s final words as he lay in the Glenwood Springs Sanitarium bed, staring at his stockinged feet: “Well ain’t that funny!”

And even less funny than that was what they did to old Ben’s body.

Frank Dobie quotes Lilly: “I never saw a man with his face shaved clean until I was a big boy. When I saw him I thought he was a dead man…. walking about, and I was mighty scared.” He, therefore, grew up determined “never to scare anybody into thinking I was a corpse.” No one ever saw him without his trademark facial hair, as long and unkempt as any creature’s fur. “Ever since I could grow a beard, I have had one.” 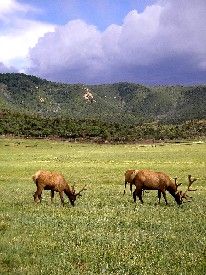 Elk grazing before the mountains by Kathy Weiser

That is, until a witless Silver City undertaker shaved it off.

In some ways we can see the great huntsman was fortunate to die when he did — before witnessing a Southwest stripped of much of its wildness…. its people weakened by a paucity of challenge, restricted by thousands of laws and regulations, stunted by their reliance on public services, and disempowered by a dependence on food purchased from stores.

Lilly was destined to speak the language of the “Cains of the animal world,” and to join them in a shared way of being as well a fateful contest. In the end, it is not someone’s accidents and illnesses that kill them, so surely as his heart’s rips and tears. In the end, the man who may have killed more lions, blacks, and grizzlies than anyone else in his time, didn’t want to have to live in a world without bears.

Sometimes when I stop writing long enough to step outside, I can hear not only the songs of wind and river but the screams of wildly mating lions, and the bugling of amorous elk. From the compost of Fall come the anxious births of Spring, followed by the sounds of tiny paws and feet on trails well worn. And creating an aural bridge between the dark and the light– death and life– are the beckoning notes of old man Lilly’s hunting horn.