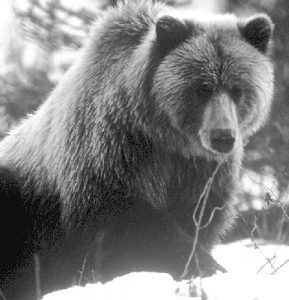 Awakeness. Intensified perception. These are the first gifts of the great bear. With their slow lumbering thunder, comes the excitement and clarity of lightning bolts: sudden, penetrating, en-lightening! Truly, one perceives more in grizzly country. Our senses honed to a fine, irreconcilable edge.

Without ever actually seeing a bear, the mere thought of it is as a claw stripping the opaque film from our perceptual lens. The civilized traits of inattention and indifference are swiftly gutted like fish and left to curl and dry on hot river rocks. Sloth joins nonchalance, pawed into a carrion pile beneath a layer of sticks and dirt.

“Anyone can kill a deer,” the great bear killer Lilly tells us. But “it takes a man to kill a varmint.” By that, he didn’t mean shooting coyotes or so-called pest species, the way people do now when they write articles about “varmint hunting.” Ben was talking about nothing less than personally facing at very intimate ranges a critter that’s bigger, meaner, and potentially better than we are! Ben himself served as proof that our species was a good deal stouter, more resilient and aware when they had to match wits and lungs with an animal capable of making us his lunch. Humans evolved special brain cells and improved response time thanks to having been hunted for thousands of years by predators far larger than us. Eyes trained by bone-crunching necessity to discern the smallest amount of movement along an aspen lined trail, evolved the capacity to recognize patterns and create art. Ears alert to the sound of approaching bruin footsteps were well suited to the development of language, and to noticing every nuance of a deftly picked bluegrass song. Similarly, noses no longer needed for basic survival eventually lose their capacity to smell: to discern the nature and proximity of any threats, and to fully enjoy this world of subtle and not so subtle scents. And with the decrease in both adventure and danger, civilized humanity may be getting more and more oblivious, less and less vitally aware.

“He showed far more feeling for several of the individual lions he’d killed than for any human being he mentioned,” writer Frank Hibben wrote of Ben, after several days trying to keep up with the aging hunter. Most of the people he knew “never took their place.” He knew this and more. He could see inside of both animals and men, he said….. could “see beneath their skin.”

Lilly belonged to a wilder tribe, the clan of the furry, the scaled and the feathered. “A man has to be accepted into the family,” as Lilly often said. “You can’t live with them and you can’t hunt them if you aren’t a member.” Even as he slew the beasts he sensed that he was one of them…. and that it was them that he belonged.

Since the very beginnings of humankind we have honored Ursus, and the earliest evidence of religious or ritual activity are the bear skulls stacked like an altar in the caves of Southern Europe. In addition, hundreds of primitive terra-cotta “bear nurses” have been excavated from various neolithic sites. Most are enthroned female bears or women with bear masks on, and most are nursing a cub. They likely represent the Mother of All Animals, and mythologically the cub becomes Zeus on the bear’s nipple, Zalmoxis and Dionysus, Artemis and Diana, the huntress.

Our ancestors in both the “Old” and “New World” watched the bear go into its den every winter and emerge every Spring— an obvious herald of rebirth, the return of life to a hungry land and hungry people. The people of urbanizing Europe harnessed the bear and its mythology to the purposes of the field and plow. In England they had the “strawbear,” while in Germany he was called the Fastnachtshar: a man dressed up in a bear costume built of straw who would be led in early Spring to each house of the village. There the man-bear would dance with all the women. It was believed that more enthusiastically they danced, the richer the coming crop would be. Pieces of the straw costume would be playfully snatched by the young women and placed either beneath their pillows to insure fertility, or else in the nests of their chickens to encourage the laying of needed eggs. The bear has long reminded humankind of a very important lesson: how out of suffering and separation comes a chance for unity and bliss…. and out of the icy sleep of winter, comes the regeneration of life.

Benjamin Lilly was briefly the Chief Huntsman for a party that included another admirer of outdoor life, Theodore Roosevelt, entertaining him with stories of the hunt and demonstrations of his physical prowess. In President Roosevelt’s journal of the trip, he described Ben as “equaling Cooper’s Deerslayer in woodcraft, in hardihood, in simplicity– and also in loquacity.” Lilly must have been out of sorts among all the attending dignitaries and reporters for he wasn’t able to get Roosevelt a bear, and his subsequent firing no doubt hurt his well-earned pride. But if so, it was likely he never showed it. As Roosevelt writes, he “never met any other man so indifferent to fatigue and hardship”…. and no doubt, to the needs, whims and judgments of others.

Lilly began shooting and preparing specimens for the Washington based Biological Survey in 1904, and over the coming years, the National Museum was the recipient of numerous mounted species for its collection. These include bear, deer, otter, and interestingly enough– the now extirpated Mexican Gray Wolf, and the endangered ivory-billed woodpecker. 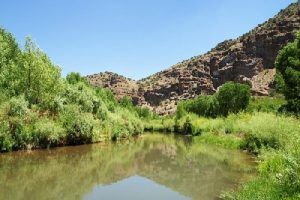 It was in New Mexico, at age fifty-five that Lilly began getting paid for what had heretofore simply been his pleasure. And his obsession. His hunting prowess convinced area ranchers to pool their money into a bounty fund especially for him– representing ranches from the Animas in the Southern bootheel of the state, north to Quemado and West to Show-Low, Arizona. The Federal government started paying bounties in 1914 on bears that were “proven cattle killers,” but Lilly found that private funders were a lot less particular. They reasoned that so long as there was a single grizz left the calves they depended on for their livelihood would remain in danger, and not a single porch dog would be safe. The sparsity of forage in the Southwest made raising cattle a difficult enough business as it was, and depredations by wolves, lions, and bears seemed to force the area ranchers into a war of extermination in defense.

The river where Lilly had some of his greatest hunting success– the very river I live on– is paradoxically called the San Francisco…. and is named after St. Francis, protector and patron Saint of wildlife.

Needless to say, neither the hungry bears nor the cows they coveted were the only ones in danger, and sometimes the hunter could end up the hunted. It was in 1913 on the Blue River in Arizona, just thirty miles West of my land, that Lilly had what he considered the closest call he ever had. Thrice wounded at long range, a vengeful grizzly waited in ambush in a patch of dense undergrowth. Ben was waist-deep in snow and only a short fifteen feet away when the frothy bruin charged. Swinging his rifle quickly to his shoulder he managed to slow the animal’s advance with a shot to the breast, then put another round into its gigantic head. Anger and momentum propelled the beast forward the last few feet and into Lilly’s heaving chest. The old man then brought the matter to a conclusion by thrusting his big knife into the bruin’s still-beating heart.