Similarly, he was a profligate slayer of birds and beasts, and yet in some ways respected nature and its denizens as much as anyone. It is said that “man always kills that which he loves.” While John Muir was helping protect wild landscapes like Yellowstone and Yosemite, Benjamin Lilly was making his life in the wilds: a life chasing bear. For thousands of years, our species have filled both the role of both predator and prey His was an ancient imperative… maintaining intimacy with the natural world by risking life and drawing blood.

Lilly usually wore a huge knife on his belt where it was easiest to grab– the favored harpoon of a graying landlocked Ahab. A product of the passion-soaked South, he joined James Bowie in often preferring a blade over a gun. A favorite way of dispatching a bear on the ground was to get in close and strike deep with the big knife. That way he didn’t have to worry about hitting his dogs with an errant bullet, as they run circles around the raging bruin…. and it gave him the opportunity to make things personal.

He fashioned large numbers of “Lilly knives” over the years using any old tool steel he could find, and he was known for giving the smaller ones away as gifts to the many hospitable folks he met on his trips. He forged a special dirk for bear, a massive “Arkansas Toothpick” tempered in panther oil, and featuring a blade with an exaggerated S-curve similar to an Asiatic Kris. He believed its wavy shape contributed to bleeding and being sharpened fully on both sides he could not only stick it deep into his quarry but also cut in either direction. 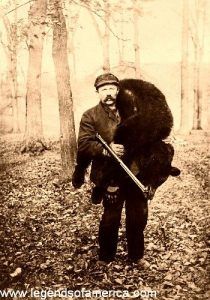 Bear hunter in the wilds of the American West

Lilly was, nonetheless, a rifleman tried and true. Near as I’ve been able to determine he had no use for either pistols or shotguns. He even used a rifle for taking ducks, carefully shooting their heads off so as not to destroy any meat. He likely carried percussion arms into the woods when he was growing up, and any cartridge gun he could afford as an adult. Sometime around the turn of the century, he began carrying a 30-30 for light game, variously reported as a Winchester or Marlin lever action, and he’s been photographed holding a Savage 1899… but for a long time, his preferred caliber for bear was .33 WCF, chambered in the notable Model 1886. There are stories around these parts about a rifle Ben supposedly left behind in a cave and then was never able to find again. What a treasure that would be to find, even hopelessly rusted shut– not only an artifact of a man’s life but a piece of a legend.

Lilly may or may not have been quite the incredible marksman that he and others claimed he was, but it’s reasonable to accept his simple assertion: “I never saw a lion that I did not kill or wound.” As a child little Ben perfected his shooting skills not on paper bulls-eyes but on moving targets like buzzards and bats, darting bees and sweet-singing cedar waxwings. On the creatures, he and dogs would eat, and those predator species he felt a holy duty to eliminate. To the contemporary reader Lilly’s enthusiasm for the kill will no doubt appear insensitive and unnecessary at times…. and admittedly he once confessed to killing eleven deer in a short stretch and leaving them lie. While he feasted on a wide variety of game, apparently the alligators he shot he never bothered to dress or cook.

Perhaps he thought he was already more emotionally armored and detached than he liked, without ingesting the energy of these scaly denizens of the Louisiana bayous. Like both the American Indians who preceded him and his own ancient Celtic ancestors, Lilly believed that “you are what you eat:” that consuming the flesh of a particular animal imparted to the eater not only essential nutrients but also some of its qualities and traits. He thus believed that dining on domestic cattle would dim his senses and slow his pace, whereas suppleness and energy could be expected from any wild meat. Of these, there were none he loved more than grilled lion steak, which he felt contributed to both his intrinsic hunter’s instincts and catlike strengths. More than once Ben Lilly affectionately cared for lion cubs he’d orphaned, raising them as pets, and then killing and eating them when they grew up. If he was conflicted, it didn’t show. 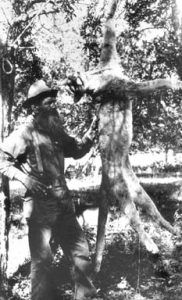 There is a time for us to wander,
when time is young and so are we.
The woods are greener over yonder,
the path is new, the world is free.

So do your roamin’ in the Springtime,
and find your love in the Summer sun,
the frost will come and bring the harvest,
and you can sleep when the day is done.

Time is like a river flowin’,
with no regrets as it moves on,
around each bend a shinin mornin’,
and all the friends we thought were gone.

— From I Know What It Means To Be Lonesome, by The Nitty Gritty Dirt Band

Lilly was feral, meaning he’d reverted to his “original wild state.” A dog is considered feral when it abandons the security of human ownership in order to respond to its nagging inner instincts, the impulse to run free under a full moon and secure its own food, adventure, and reward. Ben wasn’t “transformed” into this cage-shunning man of the woods, but rather, his days and nights on the hunt reinforced and affirmed his native wildness. From the time he was young Lilly liked to make animal sounds when announcing his presence, or when playing tricks on reticent ladies or distracted little kids. Tales abound of Ben’s childlike enthusiasm– swinging through the trees like a monkey, chattering like a squirrel. It’s said that on one occasion he challenged a prideful runner to a race, then beat him to the finish line by running like an animal on all fours. He even walked flat-footed rather than heel-first…. “like a bear” he said.

There comes a time when such a man finally looks back, only to be confronted by his own wilder tracks.

A heavy presence pads through the forest primeval, heavy like nightfall, heavy like the weighty body of the universe. We feel its approach, even as we swim the glare of the midday sun— its corporal mass, slowly moving towards us, intent on enveloping us. It is the spirit of a giant that survived the Ice Ages, now tearing apart the fallen trunks of ancient trees, knocking flailing salmon and furry golden marmots high into the air, continuing to stalk the darkly hidden caves of our dreams: the grizzly bear!

The sound of their name is enough to pass a charge, like electricity through our bones— enough to cast a long and deep shadow across our rapidly shrinking arrogance, illusory sense of omnipotence and fragile certainty. One glance at a grizzly’s unmistakable claw marks eight foot up the side of his scratching-tree and every nerve comes instantly to attention. Every sense is alerted, every light turned on at once in the mortal housing of the soul. Enlivened! Every cell open-eyed and open-mouthed, every molecule on tiptoes, straining to perceive.