“Every man and woman ought to get out and be with the elements a while every day….” Ben advised. The outdoors would alert, instruct, and inspire us. Reawaken our intuition and instinct, and stir our emotions.  Reconnect us to the basic elements of life like hunger and food, weather and fire. Strengthen our intent. Temper our steel.

If anything, Lilly followed his own advice to the extreme: seldom stepping indoors except to buy a few supplies or share a grateful rancher’s meal. Mabel Hudson of the old Hudson Ranch near here told about her parents spotting him nest among his dogs in a roadside ditch one day, and how they offered him a place to stay. “Thank you, but I prefer to spend the night right here if that’s okay.”

Perhaps as a result of so much time outside, Ben was physically impressive and a man of extreme determination. By the time he was a young man he was already amazing the locals with his unexcelled stamina, and he’d often perform feats of strength for their entertainment. One such demonstration was to pick up a giant anvil by the throat with a single hand. Dobie reports one occasion when he was abnormally tired and unable to make the lift, but how he kept straining and trying until blood literally “burst out of his fingertips.”

Old-time Catron County cowboy Lee Sturgeon passed down a story from his childhood when one day he and some other boys spotted Ben carrying a hunter client on his back across a swollen river. “Get off that old man!” they shouted. The client yelled back that he sincerely wanted to, but simply couldn’t. Lilly had him in an iron grip, and he wasn’t about to let go!

And apparently he could be bluntly honest. One story making its way around various Catron hunting camps, tells of a young boy asking Lilly if it was true that his dogs “never run deer.” Bear and lion dogs are trained to chase nothing else, and not to get distracted by the scent or sight of other game. Needless to say, most proud hunters and dog handlers would see the little fellow’s question as an opportunity to brag, exaggerate, obfuscate or lie. But not Benjamin Lilly. “I’ll tell you, son,” the by then old man replied…. “sometimes they run them ragged!” 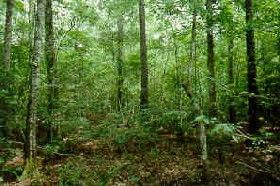 Ben may have been a perpetual wanderer, but he was never truly lost. If anything, it was in the thickets and brambles that he was fairly found and claimed. He always traveled with a sense of destination– if only the direction of his baying dogs, or the way the last bear went. While his trail twisted and turned like a meandering river, he was in many ways making a beeline away from the settlements, the crowds, the niceties and responsibilities of domestic life. And likewise, he was always aiming for a place. A place of refuge…. and hopefully, of redemption.

Whether out of love or lust, personal loneliness or accepted convention, Benjamin Lilly tried marriage two different times. But what person’s feast is another’s poison. What fits some men like a glove is to others a straightjacket of habit, chore, and constraint.

It seems that for Lilly “tying the knot” meant being tightly secured with a rope, trussed-up like a hog. It meant having a fellow’s movements restricted, his natural tendencies and urges subdued, his options limited.

Ben wed his first wife Lelia in Louisiana in the 1880s, a woman he came to call a “daughter of Gomorrah.”  She complained, among other things, that the chores never got done…. and that she needed his attention.  But married or not, he continued to take his cues from the scent on the wind and any tracks found nearby, from the noisy admonitions of migrating waterfowl and the unsated hunger of his soul. He would take off at the drop of a hat, accompanied by a pack of 20 or more dogs. It was the “call of the wild” that beckoned him away, the forest sirens’ irresistible songs.

According to Dobie, one day his wife asked him to go out and shoot a troublesome chicken hawk. A year later he showed back up, and his wife naturally wanted to know what could have possibly happened to him. “That hawk kept a-flyin’,” was all he supposedly said.  Long afterward Mrs. Acklin, proprietor of the general store in San Lorenzo, remembers Lilly doing his best to remain unaffected after receiving a letter from one of his grown kids. “Mother died last week,” it said in part. “She set a place at the table for you every meal,” for what had been some 16 years.

As we point out again and again in this book, what made the close of the 19th Century and the start of the 20th so interesting were the heightened contrasts, the dramatic twists, the confrontations between the extremes of aesthetics and tastes, values and beliefs. Between urban and rural interests, the incredibly rich and the fundamentally poor. And like the age he matured in, Benjamin Lilly was a man of contradictions. He loved the attention of children, playing with any little boys he met and calling them “podnah,” and yet he left his own sons to largely raise themselves. Father was usually gone, either somewhere down an unused trail, or else passing through nearby towns amassing a cadre of young fans. While they were adjusting to having no one except their mother to talk to or ask questions of, Ben would be out somewhere telling exciting stories of the great hunt to their neighbors’ wide-eyed children.

Lilly’s contradictions, like everything else about him, were substantial and profound. He was righteous enough never to work or hunt on Sundays, and yet he was capable of neglecting his family…. and abandoning his wife when she needed him most. “Why can’t we just live in harmony?” she reportedly asked one morning, as they sat at the deathbed of their young son Dick. Ben responded by saying that there was no longer anything left between them and then walked out the door for the last time. It was said that Lelia was a little crazy already when he met her, but his years away– and his leaving her at such a traumatic time– was no doubt a major factor in her later spending some thirty years under wraps in an institution for the mentally insane.

Lilly remarried in 1890, to a woman named Mary. As in his first relationship, when it came to his apportioning of attention and time, family came in a distant second. It seemed he preferred the attention and flattery of strangers to the comforts of loved ones and home, and that he preferred the solitude of the chase above all. Eleven years later he had once again moved off, taking his dogs with him, but never going back for his wife and three kids. It wasn’t that he was incapable of loyalty, but his was to the freedom of an unfettered life, with neither rules nor rent. His ultimate fealty was to the rugged canyon and wide-open spaces, to the baying of hounds and a trail perfumed with mountain lion scent.