Though the searches continued and Tornow was spied here and there, the mountain man continued to elude capture. A month later on April 16th, Deputy Giles Quimby, along with two other men by the names of Louis Blair and Charlie Lathrop, came upon a small shack made of bark. Sure that the crude cabin belonged to Tornow, Quimby wanted to head back for a posse, but the other two balked at having to share the bounty.

So, with guns ready, they approached the shack when a shot rang out, hitting Blair who fell into the nearby bushes. Lathrop returned fire but was immediately hit in the neck killing him instantly. Quimby, left alone with the marksman, desperately tried to negotiate with Tornow, telling him that all he wanted was the strongbox and promising to let the wanted man go free.

Quimby continued to assert that he wanted nothing but the return of the money and would then leave John alone. Though Tornow was hesitant, not sure that Quimby would keep his word, the deputy assured him that he would let him go. 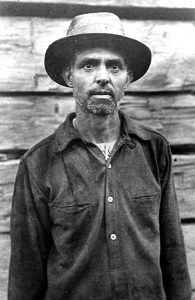 Finally, Tornow answered the deputy by stating, “It’s buried in Oxbow, by the boulder that look’s like a fish’s fin. Take it and leave me alone!”

Having retrieved the information from Tornow, Quimby didn’t keep his word, opening fire upon the foliage where John was hiding. Though no return shots were fired, Quimby wasn’t sure if he had hit the man or if Tornow might be just “playing dead.”  Stealthily, Quimby scurried away through the woods.

When Quimby returned to Montesano, Sheriff Matthews gathered up another posse and the men began the trek back to the spot where Quimby had fired on Tornow. After cautiously approaching the trees, Tornow was found dead leaning against a tree.  The men found $6.65 in silver coins on his body, identifying some of them as those taken from Jackson’s Grocery store.

Before Tornow’s body was even returned to Montesano, word had already reached the town that the “wild man” had been killed and curious gawkers began lining the street in order to get a peek at the legendary mountain man.

Deputy Sheriff Giles Quimby told newspaper reporters that John Tornow had “the most horrible face I ever saw. The shaggy beard and long hair, out of which gleamed two shining, murderous eyes, haunts me now. I could only see his face as he uncovered himself to fire a shot, and all the hatred that could fire the soul of a human being was evident.”

This further fueled the curiosity seekers’ desire to see the wildman’s face. In response, his brother Fred, who had traveled up from Portland, tried to prevent the body’s public display. However, when some 250 gawkers stormed the tiny morgue demanding to see the body, the overwhelmed coroner allowed them inside. Before it was said and done, the crowd required dozens of deputy sheriffs to prevent the nearly 700 citizens from tearing off bits of the dead man’s clothing and removing locks of his hair.

Fearing that those who were unable to view the body at the morgue would appear at the funeral, his service was held at the family’s old homestead. Immediately, postcards were printed that featured a photo of Tornow along with numerous newspaper articles with screaming headlines calling Tornow “The Great Outlaw of Western Washington.”

Of his brother’s death, Fred Tornow would, when questioned by the press, say: “I am glad John is dead. It was the best way now that it is over, and I would rather see him killed outright than linger in a prison cell.” 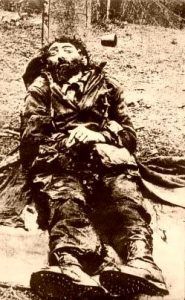 Customary in the days of the early 20th century, photos were taken of the dead. This photograph of John Tornow’s corpse appeared on postcards the very day of his funeral.

The Oregonian newspaper noted that at the time of Tornow’s death he had $1,700 on deposit in a Montesano bank, owned real estate in Aberdeen, and was a part owner of a timber claim in Chehalis. Giles Quimby was proclaimed a hero for finally killing the feared “Wild Man of the Wynoochee,” so much so that he received offers to appear on stage to tell of his gruesome tale. Quimby politely turned down these offers.

When the furor of Tornow’s death had settled, Quimby went looking for the boulder that looked like a fish’s fin and was delighted when he found it. However, his happiness was short-lived, as search as he might, he never found the strongbox. Numerous other men followed in his footsteps, looking all over Oxbow, Washington, but the $15,000 treasure was never found.

The money is thought to be buried on the Wynoochee River where it turns into a large, horseshoe-shaped creek. However, a dam has since been built upstream, which may have caused a change in the river’s flow. Tornow said that he buried the cache near a fin-like rock. The hiding place is within the Olympic National Forest, which requires permission to hunt.

Tornow was buried in Matlock Cemetery in Grays Harbor, Washington, where his tombstone stands today.

The Infamous Victor Smith & a Tale of Three Lost  Treasures