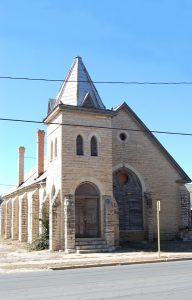 In 1903-04, the Methodists and Episcopalians finally built another church on the same site as the first which had been destroyed years earlier. With Del Rio quickly growing during the early years of the 20th Century, it wouldn’t be long before the congregation would outgrow the stone chapel. A much larger Methodist Church was completed in 1931. The beautiful new church is located on Spring Street. The old stone chapel then served for storage for several years. Today, it stands abandoned and falling into ruins. The Episcopalians also built a new church — the Saint James Episcopal Church located on Greenwood Street.

Though the city was moving into the future, its frontier mentality was not yet over. During the Mexican Revolution (1910-1916) a number of border towns were raided and in response, Camp Michie was established on the outskirts of Del Rio. The semi-permanent military camp was home to soldiers on border patrols out of Fort Clark, who were also tasked with guarding railroad bridges along the border, the High Bridge across the Pecos River, and other strategic points.

By 1914 the city’s population had reached more than 6,000 people and would grow more when Camp Michie, once again, became an important outpost. When World War I began that year, the guarding of the bridges became even more important, as the tracks were a vital link for moving men and equipment between the Pacific Coast and the Gulf of Mexico.

Housing cavalry and infantry troops, the post was primarily a tent camp, but, did have a few permanent structures. It was officially disbanded in June 1921, and in 1924, the land was sold back to the original owner. Nothing remains of the old post today. 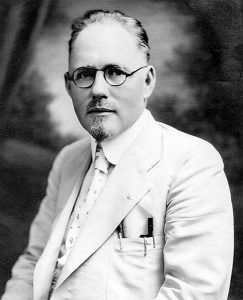 In 1933, in walked a man named Dr. John R. Brinkley, who had lost his medical license to practice in the United States, for performing a controversial operation which transplanted goat glands into men who suffered from impotence.

In 1918, Brinkley opened a clinic in Milford, Kansas, and advertised his services widely. After visiting a Los Angeles, California radio station in 1922, he was sure that this form of marketing was the best format to draw in customers. In 1923, he formed  KFKB radio station in Milford, aggressively promoting his medical practice. However, in 1929, he lost his radio license. By this time though, he had accumulated a fortune and had moved on to Del Rio, Texas. Across the border in Ciudad Acuna, he established what would become XERA radio, the most powerful radio station at the time. He also bought and enlarged what is known as the Brinkley Mansion in Del Rio today. 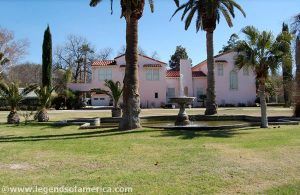 In 1939, after the signing of various international treaties with the U.S., and the implementation of what is known as the Brinkley Act, which prohibited broadcasting studios in the US from being connected to transmitters in Mexico via phone line or other means, Mexico closed his high power radio station.

Brinkley then opened a new medical practice in Arkansas, but kept his home in Del Rio, traveling back and forth. After more legal troubles, he died penniless in 1942 in San Antonio. A private residence today, the Brinkley Mansion continues to stand in south Del Rio at 512 Qualia Drive. The license for the radio station would remain silent until 1947.

Over the years, the government continued to use the isolated Del Rio area for different types of military training. When World War II started, the army opened a base near the city and was called Laughlin Army Field in 1943, for pilot training and a bombardment school. It was named for after Jack T. Laughlin, a B-17 Flying Fortress navigator who became Del Rio’s first WWII casualty when his plane was shot down in the Battle of the Java Sea, Japan in January 1942. It also became an Army Air Force Auxiliary Field but was closed in October 1945. 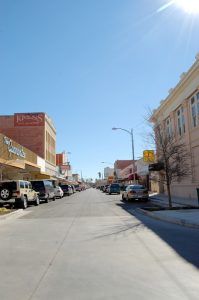 However, the base was reactivated in May 1952, becoming the Laughlin Air Force Base. Its initial mission was to train F-84 fighter pilots. By 1957 the base had been assigned to the Strategic Air Command and provided a home for RB-57 and U-2 reconnaissance aircraft.

Today, the base continues to operate as an important Air Training Command center. Approximately 500 pilots graduate every year. According to base authorities, the base and the City of Del Rio, maintain one of the best relationships of any military post in the nation.

While the Air Force base was developing, history continued at old Dr. Brinkley’s radio station building, bringing fame to one of the nation’s most popular broadcasters and ending in bloodshed. In 1959, the station, now XERF, was purchased by a Texas corporation formed by famed announcers Ramon D. Bosquez, and Arturo Gonzalez, who, as of this writing in 2011, is Del Rio’s oldest living resident.  The new company increased the power of the station far beyond what was legally allowed in the U.S. to a booming 250,000 watts. This power allowed the AM signal to be heard in all 50 states of the U.S., Canada, and Latin America.

In the meantime, Del Rio maintained a steady population, continuing a primary economy of ranching and agriculture. In the 1960s, the city would thrive and change with the development of U.S. Highway 90, north of the original townsite. Though numerous businesses would profit from the new highway, it would be devastating to Del Rio’s old downtown area. 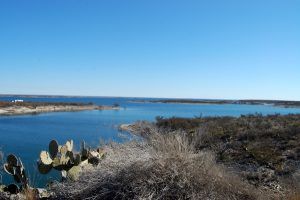 Del Rio’s growth got another boost when the Amistad Dam and Reservoir was built on the Rio Grande River in 1969. Built for flood control, irrigation, power, and recreation, the lake is located 12 miles north of Del Rio. Owned by both the United States and Mexico, it is operated by the International Boundary and Water Commission. It was named for the Spanish word meaning “friendship,” for the cooperation and goodwill exhibited by both countries in the project.

With the many snow birders, fishermen, and water enthusiasts flocking to one of the most beautiful blue lakes in Texas, Del Rio’s population increased to almost 31,000 people by 1990. The area continues to thrive with a ranching economy or primarily Angora goats and sheep, supplemented by tourism, trade with Mexico, and the military base.

Today, Del Rio is called home to about 35,000 people and has not forgotten its rich history. Located throughout the city are numerous historic buildings and historic markers. As cross-country travelers, Del Rio also has some of the nicest folks we’ve met anywhere. 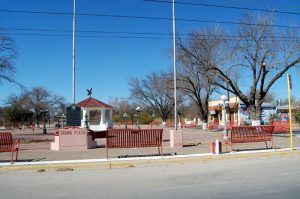