The First Archaeological excavation at Shiloh took place in 1899 when Cornelius Cadle, chairman of the Shiloh Park Commission, dug a trench into “Mound C.” There, he found the site’s most famous artifact, a large stone pipe carved in the shape of a kneeling man. Now on display in the Tennessee River Museum in Savannah, Tennessee, this effigy pipe is made of the same distinctive red stone and is carved in the same style as a number of human statuettes from the Cahokia chiefdom, located in Illinois near St. Louis.

Survey work in the winter of 1933-34 revealed numerous small, round mounds at the Shiloh site, each about one foot high and ten to twenty feet in diameter. Here were found the remains of wattle-and-daub houses. These structures had walls of vertical posts interlaced with branches (wattle), which were then coated with a thick layer of clay (daub). Each house had a fireplace in the center of the floor. A palisade wall, also made of wattle and daub, protected the site.

The early inclusion of the mounds area within the boundary of the Shiloh National Military Park has protected the site from any modern use. Because the Shiloh site has never been disturbed by the plow, the daub of collapsed walls still stands as low rings or mounds. Shiloh is one of the very few places in the eastern United States where remains of prehistoric houses are still visible on the ground’s surface. 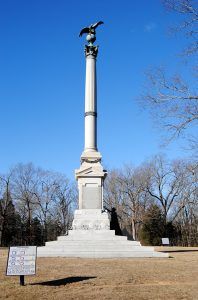 Monuments to the various regiments who fought in the Battle of Shiloh are located within the park.

Congress established Shiloh National Military Park on December 27, 1894, to commemorate the April 6-7, 1862 battle that raged around Shiloh Church and Pittsburg Landing. The Secretary of War appointed a commission to oversee its building and development which was made up of veterans, who relied heavily on its appointed historian, David W. Reed, a member of the 12th Iowa, which had fought squarely in the Hornets’ Nest. Reed wielded much power in locating troop positions, making sense of the confusing reports, and interpreting the battle to the public. With images of battle in his mind and a growing consensus that the Hornets’ Nest was the central event of Shiloh, Reed developed the Hornet’s Nest interpretation of the battle, which still dominates Shiloh historiography today.

Producing more than 23,000 casualties, the battle was the largest engagement in the Mississippi Valley campaign during the Civil War. Originally under the War Department, Shiloh National Military Park was transferred to the National Park Service in the Department of the Interior in 1933. Currently, the park has over 4,200 acres. The Corinth Battlefield Unit encompasses roughly 240 acres with potential for a total of 800 acres.

Besides preserving the site of the bloody April 1862, battle in Tennessee, the park commemorates the subsequent siege, battle, and occupation of the key railroad junction at nearby Corinth, Mississippi. It also protects and preserves the Shiloh National Cemetery and the Shiloh Indian Mounds. Both Shiloh and Corinth feature visitor centers. A 12.7-mile auto tour route, with 20 stops, takes you through the Shiloh Battlefield.  The park will provide you with a map of the battlefield and brief commentary for each stop. The entire route is accessible to school buses. 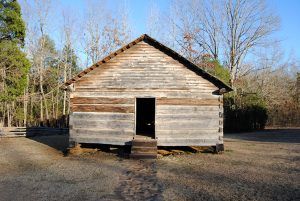 Both Shiloh and Corinth host several living history events throughout the year, mostly from April to October. The major event each year is the Battle of Shiloh anniversary living history demonstration. The park is open all year with the exception of Christmas Day. 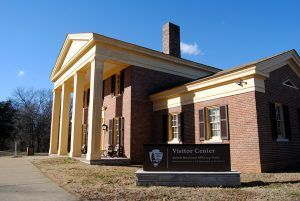