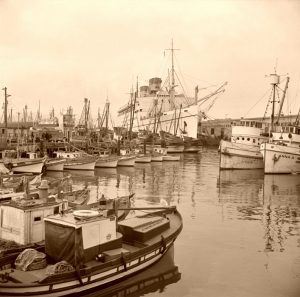 A historian once described San Francisco during World War II as “a giant cannon aimed at the Pacific,” likening the millions of tons of cargo and munitions coming out of the port to projectiles sent against the Japanese military forces. To protect the all-important entrance to the harbor, the Golden Gate and its famous bridge, the U.S. Army and Navy arrayed a vast network of coastal fortifications, underwater minefields, antiaircraft guns, radars, searchlights, observation posts, and patrol aircraft. Today, the still-impressive remains of that network can be seen at many locations in the Golden Gate National Recreation Area.

As the days and weeks progressed, the initial fear of imminent invasion settled into a long-term commitment to defend the harbor by every means possible. Mobile antiaircraft guns, searchlights, and radars were positioned on virtually every hill and knoll overlooking the Golden Gate. The U.S. Navy stretched an antisubmarine net across the inner harbor extending from the Marina in San Francisco to Sausalito in Marin, and stationed a navy tugboat to open and close the net to allow friendly shipping to pass. Soldiers assigned to the fortifications and observation stations constructed extensive earthwork trenches on the hillsides near their batteries, and in some cases tunneled into hillsides to construct unauthorized but comfortable underground quarters. Everywhere, camouflage paint was daubed on concrete batteries and wood barracks, and acres of camouflage nets were stretched over fortifications to obscure their presence from high flying enemy planes. Overhead, navy blimps armed with depth charges patrolled offshore waters searching for Japanese submarines but only attacked the occasional unfortunate whale. 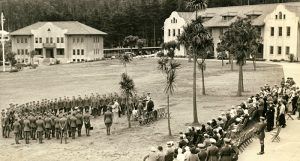 The command center for all these activities was an underground facility covertly constructed at Fort Winfield Scott in the Presidio of San Francisco and dubbed the Harbor Defense Command Post/Harbor Entrance Command Post. This command post was little discussed but its role was crucial, for here inside the bombproof command center, army and navy senior staff coordinated their resources both to defend the bay against enemy sea or air attack and also to track and coordinate all shipping traffic in and out of the Golden Gate.

No enemy has ever attacked San Francisco, and by 1944 it was obvious to the army-navy commanders that invasion was a far distant likelihood. The soldiers of the harbor defenses were needed on battlefronts elsewhere, and starting that year the Harbor Defense Command began to phase out its operations. With the signing of the peace treaty with Japan in 1945, the army reevaluated its need for fixed defenses, especially in light of a new age of long-range bombers and nuclear weapons. The phase-out was speeded up, and by 1948 the last of the army’s San Francisco coastal artillery fortifications had been scrapped. 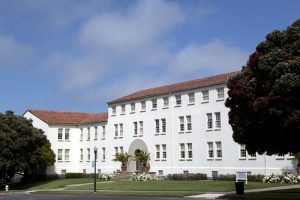 The Presidio of San Francisco by Carol Highsmith.

Today, the remains of “Fortress San Francisco” can still be found throughout the Golden Gate National Recreation Area. In the Presidio of San Francisco, Battery Lowell A. Chamberlin at Baker Beach displays a rare six-inch rifle on a 1903 disappearing carriage, and an adjacent display gallery tells the story of the bay’s harbor defenses. Fort Point, a veteran of the Civil War, was pressed into use during World War II for a battery of three-inch guns, and its museum also tells the story of the harbor defenses of San Francisco. At Forts Funston and Cronkhite, the empty casemates of Batteries Davis and Townsley can still be explored although their unlit interiors are closed for safety reasons. Below Battery Townsley at Rodeo Beach in Fort Cronkhite, visitors can see the preserved 1940s “mobilization barracks” complex where the coast artillery soldiers lived.

Across from Fort Cronkhite is Fort Barry, site of several 1900-era gun batteries that were armed during World War II. Many of these batteries still display remnants of their green-and-ochre camouflage schemes applied shortly after Pearl Harbor. Also at Fort Barry is Battery Elmer J. Wallace, a 12-inch battery that was extensively rebuilt with overhead cover during World War II and now appears much like a scaled-down version of Batteries Davis and Townsley. 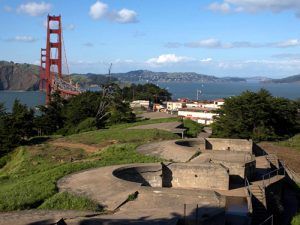 The Presidio And Golden Gate Bridge in San Francisco, California

Throughout Golden Gate National Recreation Area are dozens of observation posts used by coast artillery troops. Officially known as “base end stations,” these tiny structures housed a crew of observers whose job was to search the horizon for the approach of enemy ships and, in the event of an attack, direct the gunfire of the big guns through telephone communication. These stations stretch along the San Francisco coastline from Point Reyes in the north to Half Moon Bay in the south. Some of the best examples can be found at Fort Cronkhite above Battery Townsley; at Fort Barry near Battery Mendell; and at Fort Funston near Battery Davis.

Perhaps the most visible remnant of the army’s defensive system is the land itself, for in their efforts to construct ever more far-flung fortifications the U.S. Army purchased large tracts of land overlooking the Golden Gate and its approaches. Kept out of private hands, these lands eventually formed an unintentional but invaluable “green belt” around the entrance to San Francisco Bay. In 1972, Congress created the Golden Gate National Recreation Area and included these lands within its boundaries. Today, the former World War II harbor defense posts of Forts Funston, Miley, Winfield Scott, Baker, Barry, and Cronkhite provide some of the most spectacular and unspoiled open space surrounding any American city. Combined with the even earlier military posts of Alcatraz Island, Angel Island, Fort Mason and the Presidio of San Francisco, the U.S. Army handed down to today’s generation a gift of urban parkland truly unrivaled anywhere.

People from across the Nation came to the Bay Area to help the war effort, many of whom stayed in the Bay Area after the war ended. As a result, they enriched the area communities with new cultures and traditions. 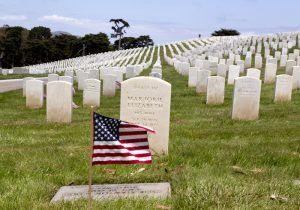