The Santa Fe had now reached the Pacific coast over its own lines, but it was handicapped by poor connections with the East. Its next move, therefore, was eastward to Chicago, where it acquired the Chicago and St. Louis Railroad between Chicago and Streator, Illinois, and then constructed lines between the latter point and the Missouri River. During the same year, the company opened branches southward to the Gulf of Mexico until by May 1888, the entire system comprised 7100 miles.

This rapid expansion of the property, combined with extravagance in management and a reckless policy in the payment of dividends, brought the company into financial difficulties within a year after the completion of the system. Unprofitable branches had been built, and these had become an immediate burden to the main system. It is the same story that has been told of most of the large railroads of those days. Strenuous efforts were made to save the property from a receivership, and a committee was appointed in September 1889, to devise ways and means of reform and reorganization.

The new management of the Santa Fe was a rational one and substantially reduced the obligations of the road. Had its spirit been maintained, a second failure and reorganization a few years later would not have been necessary. New interests, however, came into the property, and, though it was hoped that they would support a conservative policy, the former programmed of expansion was resumed until in 1890 the St. Louis and San Francisco system was merged with the Santa Fe on a very extravagant basis. Within a year it was clear that the St. Louis and San Francisco would prove more of a liability than an asset. During the same time, the less important purchase of the Colorado Midland Railway also turned out to be a poor investment.

The next four years were marked by more bad financial management which culminated in the failure of the reorganized company. In 1892 an exchange of income bonds for fixed interest-bearing bonds so increased the fixed charges of the company that, as a result of the panic of 1893 and its ensuing depression, the great Santa Fe system suddenly found itself in the hands of a receiver. The president, John W. Reinhart, had persistently asserted throughout 1893 that the company was financially sound; but an examination of its books subsequently made in the interest of the security holders disclosed gross irregularities, dishonest management, and manipulation of the accounts.

During the year 1894 the property was operated under the protection of the courts, and early in 1895, a new and comprehensive scheme of reorganization was carried out. This latest plan involved dropping the St. Louis and San Francisco system, the Colorado Midland, and all other unprofitable branches; it wiped out the floating debt; it supplied millions of new capital, and it enabled the succeeding management at once to build up and improve the property. 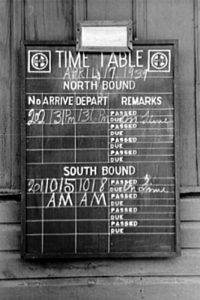 At the head of the new company was placed Edward P. Ripley—a railroad manager of great executive ability and a practical, broad-minded business man of the modern type, who has ever since remained president of the road. The history of the Santa Fe since 1895 has been closely identified with Ripley’s business career, and its record during these two decades has been an enviable one. Steady progress from year to year in the volume of business, in general development of the system, in the improvement of its rights of way, terminals, and equipment, has characterized its history through periods of depression as well as times of prosperity. Its resources have grown to vast totals; its credit equals that of the best of American railroads; its stocks and bonds are prime investments, and each year it pours millions of dollars of profits into the hands of its stockholders.

Compiled and edited by Kathy Weiser/Legends of America, updated January 2018.

About the Author: John Moody was the author of The Railroad Builders, A Chronicle of the Welding of the States, written in 1919. Penetrating the Pacific Northwest is the seventh chapter of the book. The tale is not 100% verbatim, as minor grammatical errors and spelling have been corrected.