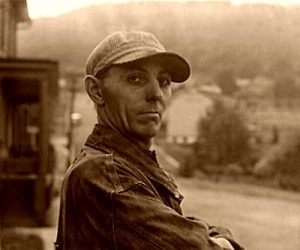 Locomotive engineers are as a class said to be superstitious, but J.M. Pinckney, an engineer, known to almost every Brotherhood man, is an exception to the rule. He has never been able to believe the different stories told of apparitions suddenly appearing on the track. Still, he had an experience last Sunday night on the Northern Pacific eastbound overland that made his hair stand on end.

By courtesy of the engineer, also a Brotherhood man, Mr. Pinckney was riding on the engine. They were recounting experiences, and the fireman, who was a green hand, was getting very nervous as he listened to the tales of wrecks and disasters, the horrors of which were graphically described by the veteran engineers.

The night was clear, and the rays from the headlight flashed along the track, and, although they were interested in spinning yarns, a sharp lookout was kept, for they were rapidly nearing Eagle gorge, in the Cascades, the scene of so many disasters and the place which is said to be the most dangerous on the 2,500 miles of road.

The engineer was relating a story and was coming to the climax when he suddenly grasped the throttle, and in a moment, had “thrown her over,” that is reversed the engine. The air brakes were applied, and the train was brought to a standstill within a few feet of the place where Engineer Cypher met his death two years ago. By this time, the passengers had become curious about the matter, and all sorts of questions were asked the trainmen. The engineer made an excuse that some of the machinery was loose, and in a few moments, the train was speeding on to her destination.

“What made you stop back there?” asked Pinckney. “I heard your excuse, but I have run too long on the road not to know that your excuse is not the truth.”

His question was answered by the engineer pointing ahead and saying excitedly:

“Looking out of the cab window,” said Mr. Pinckney, “I saw about 300 yards ahead of us the headlight of a locomotive.”

“Stop the train, man,” I cried, reaching for the lever.

“Oh, it’s nothing. It’s what I saw back at the gorge. It’s Tom Cypher’s engine, No. 33. There’s no danger of a collision. The man who is running that ahead of us can run it faster backward than I can this one forward. Have I seen it before? Yes, twenty times. Every engineer on the road knows that engine, and he’s always watching for it when he gets to the gorge.”

The engine ahead of us was running silently, but smoke was puffing from the stack, and the headlight threw out rays of red, green, and white light. 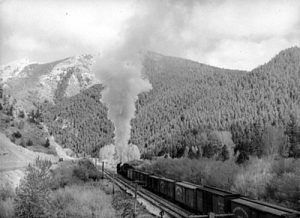 It kept a short distance ahead of us for several miles, and then for a moment, we saw a figure on the pilot. Then the engine rounded a curve, and we did not see it again. We ran by a little station, and at the next, when the operator warned us to keep well back from a wild engine that was ahead, the engineer said nothing. He was not afraid of a collision.

Just to satisfy my own mind on the matter, I sent a telegram to the engine wiper at Sprague, asking him if No. 33 was in. I received a reply stating that No. 33 had just come in and that her coal was exhausted and boxes burned out. I suppose you’ll be inclined to laugh at the story, but just ask any of the boys, although many of them won’t talk about it. I would not myself if I were running on the road. It’s unlucky to do so.”

With this comment upon the tale, Mr. Pinckney boarded a passing caboose and was soon on his way to Tacoma, Washington. It is believed by Northern Pacific engineers that Thomas Cypher’s spirit still hovers near Eagle gorge.

Railroad Tales of the American West