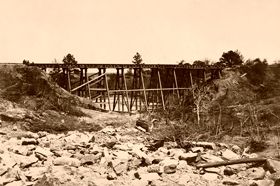 At Crag View there was, at that time, a high wooden trestle stilted up on spliced spruce piles with the bark on.

It used to creak and crack under the engine when it was new. McNally was nearing it now. It lay, however, just below a deep rock cut that had been made in a mountain crag and beyond a sharp curve.

McNally leaned from his cab window, and when the lightning flashed, saw that the cut was clear of rock and released the brakes slightly to allow the long train to slip through the reverse curve at the bridge. Curves cramp a train, and a smooth runner likes to feel them glide smoothly.

As the black locomotive poked her nose through the cut, the engineer leaned out again; but the after-effect of the flash of lightning left the world in inky blackness.

Back in a darkened corner of the drawing-room of the rearmost sleeper the sleuth snored with both eyes and ears open.

Suddenly he saw a man, fully dressed, leap from a lower berth in the last section and make a grab for the bell-rope. The man missed the rope; and before he could leap again the detective landed on the back of his neck, bearing him down. At that moment the conductor came through; and when he saw the detective pull a pair of bracelets from his hip-pocket, he guessed that the man underneath must be wanted, and joined in the scuffle. In a moment the man was handcuffed, for he really offered no resistance. As they released him he rose, and they squashed him into a seat opposite the section from which he had leaped a moment before. The man looked not at his captors, who still held him, but pressed his face against the window. He saw the posts of the snow-shed passing, sprang up, flung the two men from him as a Newfoundland would free himself from a couple of kittens, lifted his manacled hands, leaped toward the ceiling, and bore down on the signal-rope.

The conductor, in the excitement, yelled at the man, bringing the rear brakeman from the smoking-room, followed by the black boy bearing a shoe-brush.

Once more they bore the bad man down, and then the conductor grabbed the rope and signaled the engineer ahead.

Men leaped from their berths, and women showed white faces between the closely drawn curtains.

Once more the conductor pulled the bell, but the train stood still.

One of the passengers picked up the man’s hand-grip that had fallen from his berth, and found that the card held in the leather tag read:

“Go forward,” shouted the conductor to the rear brakeman, “and get ’em out of here,—tell McNally we’ve got the ghost.”

The detective released his hold on his captive, and the man sank limp in the corner seat.

The company’s surgeon, who happened to be on the car, came over and examined the prisoner. The man had collapsed completely.

When the doctor had revived the handcuffed passenger and got him to sit up and speak, the porter, wild-eyed, burst in and shouted: “De bridge is gone.”

A death-like hush held the occupants of the car.

“De hangin’ bridge is sho’ gone,” repeated the panting porter, “an’ de engine, wi’ McNally in de cab’s crouchin’ on de bank, like a black cat on a well-cu’b. De watah’s roahin’ in de deep gorge, and if she drap she gwine drag—”

The doctor clapped his hand over the frightened darky’s mouth, and the detective butted him out to the smoking-room.

The conductor explained that the porter was crazy, and so averted a panic.

The detective came back and faced the doctor. “Take off the irons,” said the surgeon, and the detective unlocked the handcuffs.

Now the doctor, in his suave, sympathetic way, began to question Bradish; and Bradish began to unravel the mystery, pausing now and again to rest, for the ordeal through which he had just passed had been a great mental and nervous strain.

He began by relating the Ashtabula accident that had left him wifeless and childless, and, as the story progressed, seemed to find infinite relief in relating the sad tale of his lonely life. It was like a confession. Moreover, he had kept the secret so long locked in his troubled breast that it was good to pour it out.

The doctor sat directly in front of the narrator, the detective beside him, while interested passengers hung over the backs of seats and blocked the narrow aisle. Women, with faces still blanched, sat up in bed listening breathlessly to the strange story of John Bradish.

Shortly after returning to their old home, he related, he was awakened one night by the voice of his wife calling in agonized tones, “John! John!” precisely as she had cried to him through the smoke and steam and twisted débris at Ashtabula. He leaped from his bed, heard a mighty roar, saw a great light flash on his window, and the midnight express crashed by.

To be sure it was only a dream, he said to himself, intensified by the roar of the approaching train; and yet he could sleep no more that night. Try as he would, he could not forget it; and soon he realized that a growing desire to travel was coming upon him. In two or three days’ time this desire had become irresistible. He boarded the midnight train and took a ride. But this did not cure him. In fact, the more he traveled the more he wanted to travel. Soon after this he discovered that he had acquired another habit. He wanted to stop the train. Against these inclinations he had struggled, but to no purpose. Once, when he felt that he must take a trip, he undressed and went to bed. He fell asleep, and slept soundly until he heard the whistle of the midnight train. Instantly he was out of bed, and by the time they had changed engines he was at the station ready to go.