“She looked at the toe of her shoe for a minute again, turned red and white around the gills, looked up at me, shyly at first, then fully and fairly, stretched out her hand and said:

“Course, I didn’t care, or nothing — no more than a man cares for his head.

“I guess that was about a half engagement, anyhow, it’s the only one we ever had. She said it would be ruinous to our plans if I was seen with her then or afterward; and agreed to leave a note at the house for me by next trip, telling me her plan — which she should talk over with her father.

“A couple of days later I got in from a round trip and made a dive for the boarding-house.

“‘I was anxious to hear from home.’

“I was up to fever heat, but could do nothing but wait. I went to bed late, and, raising up my pillow to put my watch under it, I found a note; it read:

“‘Just thought of that rule for changing counter-balance you wanted. There has always been a miscalculation about the weight of counter-balance; they are universally too heavy. The weights are in pieces; take out two pieces; this treatment would even improve a mule sweep. When once out, pieces should be changed or placed where careless or malicious persons cannot get hold of them and replace them. All is well; hope you are the same; will see you some time soon.

“Here was apparently a fool letter from one young railroader to another, but I knew well enough that it was from Rachel and meant something.

“I noticed that it was dated the next night; then I commenced to see, and in a few minutes my instructions were plain. The old five-stamp mill was driven by a mule, who wandered aimlessly around a never-ending circle at the end of a long, wooden sweep; this pole extended past the post of the mill a few feet, and had on the short end a box of stones as a counter-weight. I would find two packages of gold there at midnight of July 17.

“I was running one of those old Pittsburgh hogs then, and she had to have her throttle ground the next day, but it was more than likely that she would be ready to go out at 8:30 on her turn; but I arranged to have it happen that the stand-pipe yoke should be broken in putting it up, so that another engine would have to be fired up, and I would lay in. 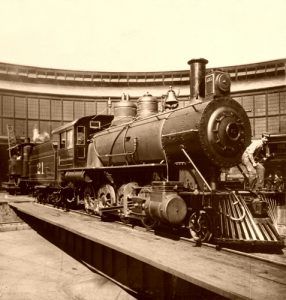 “I told stories in the roundhouse until nearly ten o’clock that fateful night, and then started for the hash-foundry, dodged into a lumber yard, got onto the rough ground back of town and made a wide detour toward Constitution Gulch, the Black Prince and the mule-sweep. I crept up to the washed ground through some brush and laid down in a path to wait for midnight. I felt a full-fledged sneak-thief, but I thought of Rachel and didn’t care if I was one or not, so long as she was satisfied.

“I looked often at my watch in the moonlight, and at twelve o’clock everything was as still as death. I could hear my own heart beat against my ribs as I sneaked up to that counter-balanced sweep. I got there without accident or incident, found two packages done up in canvas with tarred-string handles; they were heavy but small, and in ten minutes I had them alone with me among the stumps and stones on the little mesa back of town.

“I’ll never forget how I felt there in the dark with all that money that wasn’t mine, and if some one had have said ‘boo’ from behind a stump, I should have probably dropped the boodle and taken to the brush.

“As I approached the town, I realized that I could never get through it to the boarding-house or the roundhouse with those two bundles that looked like country sausages. I studied awhile on it and finally put them under an old scraper beside the road, and went without them to the shops. I got from my seat-box a clean pair of overalls and jacket and came back without being seen.

“I wrapped one of the packages up in these and boldly stepped out into the glare of the electric lights — I remember I thought the town too darned enterprising.

“One of the first men I met was the marshal, Jack Kelly. He was reported to be a Pinkerton man, and was mistrusted by some of the men, but tried to be friendly and ‘stand in’ with all of us. He slapped me on the back and nearly scared the wits out of me. He insisted on treating me, and I went into a saloon and ‘took something’ with him, in fear and trembling. The package was heavy, but I must carry it lightly under my arm, as if it were only over clothes.

“I treated in return, and had it charged, because I dare not attempt to get my right hand into my pocket. Jack was disposed to talk, and I feared he was just playing with me like a cat does with a mouse, but I finally got off and deposited my precious burden in my seat-box, under lock and key — then I sneaked back for the second haul. I met Jack and a policeman, on my next trip, and he exclaimed:

“‘Why, ain’t you gone out yet?’ and started off, telling the roundsman to keep the bunkos off me up to the shop. I thought then I was caught, but I was not, and the bluecoat bid me a pleasant good-night, at the shop yard.

“When I got near my engine, I was surprised to see Barney Murry, the night machinist, with his torch up on the cab — he was putting in the newly-ground throttle.

“Just before I had decided to emerge from the shadow of the next engine, Barney commenced to yell for his helper, Dick, to come and help him on with the dome-cover.