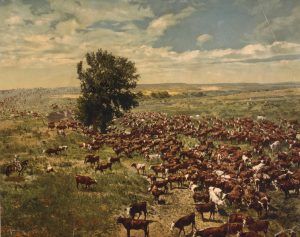 Well, we started, and — but there ain’t no use in telling you all about it — I went home with Joe, went up a creek with a jaw-breaking Spanish name, for miles, to a very good cattle ranch, that was the property of “Mormon Joe.”

Joe only quit running some three or four years ago, and the ranch and its neat little home represented the savings of Joe Hogg’s life.

His wife and only child had just started for a visit to England where she was born.

The next day we rode the range to see Joe’s cattle, and the next we started out for a little hunt. It was sitting by a jolly camp-fire, back in the hills of New Mexico, that “Mormon Joe” told me the true story of the robbery of the Black Prince mine and the romance of his life.

Filling his cob pipe with cut-plug, Joe sat looking away over space toward our hobbled horses and then said:

“Old man, I reckon you remember all about the Black Prince robbery. I don’t forget you were the first man that came to the cooler to see me while I was doing time as a suspect. Well, coming right down to the point, I had the dust all the time! And the working out of the mystery would be rather interesting reading if it was written up, and, as you are such an accomplished liar, I wouldn’t be surprised if you made it the base-line of one of them yarns of yourn — only, mind you, don’t go too far with it, for it’s as curious as a lie itself. I would not try to improve on it, if I was you. I’ll tell it to you as it was.

“About four days before the robbery, I was introduced to Rachel Rokesby, daughter of one of the partners in the Black Prince. I met her, in what seemed to be a casual way, at Mother Cameron’s hash-foundry, but I found out, a long time afterward, that she had worked for two weeks to bring about the introduction.

“I don’t know as you remember seeing her, but she was a quiet, retiring, well-educated, rosy-cheeked English girl — impressed you right away as being the pure, unrefined article, about twenty-two karat. She “chinned” me about an hour, that evening, and just cut a cameo of her pretty face right on my old heart.

“Well, course I saw her home, and tried my best to be interesting, but if a fellow ever in his natural life becomes a double-barreled jackass, it’s just immediately after he falls in love. Why, he ain’t as interesting as the unlettered side of an ore-sack.

“But we got on amazing well; the girl did most of the talking and along toward the last, mentioned that she was in great trouble — of course I wa’n’t interested in that at all. I liked to have broken my neck in getting her to tell me at once if I couldn’t do something to help her, say, for instance, move Raton mountain up agin Pike’s Peak.

“I went home that night, promising to call on her the next trip, not to let any one know I was coming, not to tell anybody I had been there, not for worlds to repeat or intimate what she told me, and she would tell me her trouble from start to finish, and then I could help her, if I wanted to. Well, I wanted to, bad.
“I went up to the Rokesby’s cabin, next trip in; it was dark, and as I went up the front walk, I heard the old gentleman going out the back, bound for the village ‘diggin’s.’ I had it all to myself — the secret, I mean.

“When I went in, I got about a forty-second squeeze of a neat little hand, and things did look so nice and clean and homelike that I had it on the end of my tongue to ask right then to camp in the place. 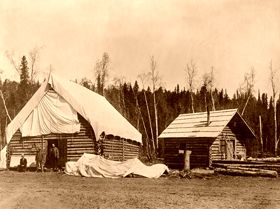 “After a few commonplaces, she turned around and asked me if I still wanted to help her and would keep the secret, if I concluded in the end to keep out of her troubles. You bet your life, old man, she didn’t have to wait long for assurance — why I wouldn’t’a waited a minute to have contracted to turn the Mississippi into the Mammoth Cave, if she had asked it.

“‘Well,” says she, finally, “it is not generally known, in fact, isn’t known at all, that the Black Prince is a paying placer, and that papa and Mr. Sanson have been taking out lots of gold for some time. They have over fifty pounds of gold-dust and nuggets hidden under the floor of the old mill.’

“‘But that isn’t all the story,’ she continued; ‘we have discovered a plot on the part of Mr. Sanson to rob papa of the gold and burn the mill and sluice-boxes, to hide the crime. You will find that every tough in town is his friend, because he buys whisky for them, and they all dislike papa.

If he carried out his plan, we would have no redress whatever; all the justices in town can be bribed. The plan is to take the gold, burn the mill, and then accuse papa of the crime. Now, can’t you help me to fool that old villain of a Sanson, and put papa’s half of the money in a safe place?’

“I thought quite a while before I answered; it seemed strange to me that the case should be as she stated, and I half feared I might be made a cat’s-paw and get into trouble, but the girl looked at me so trustingly with her blue eyes and added:

“‘I am afraid that I am the cause of all the trouble, too. Papa and Sanson got along well until I refused to marry him; after that, the row began — I hate him. He said I would have to marry him before he was done with me — but I won’t!’

“‘You bet you won’t, darling,’ says I, before I thought. ‘Pardon me, Miss Rokesby, but if there is any marrying done around here, I want a hand in the game myself.’

“She blushed deeply, looked at the toe of her shoe a minute, and said:

“‘I’m only eighteen, and am too young to think of marrying. Suppose we don’t talk of that until we get out of the present difficulties.’

“‘Sensible idea,’ says I. ‘But when we are out, suppose you and I have a talk on that subject.’