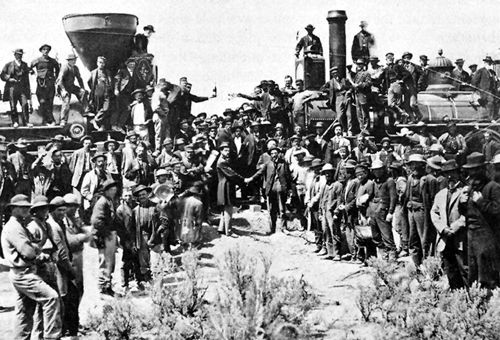 Meeting of the railroad lines

Omaha ad the biggest day in its history: a hundred guns when the news came. A procession embracing every able-bodied man in the town, in the afternoon. Speeches, pyrotechnics, and illuminations in the evening.

At Salt Lake the Mormons and Gentiles held a love feast in the Tabernacle and decided to build a few railroads for themselves.

San Francisco could not wait until the 10th. They started the evening of the 8th when it was announced at the theaters the two roads had met, and it took two good solid days of celebrating to satisfy the people of that town.

It was rightly felt that the completion of the line was an event in the history of our country. It marked the progress of the West, united the Pacific Coast population with that of the East. It was the commencement of the end of the Indian troubles—assured the settlement of the West, and the development of its mines and other resources.

There has been but three general celebrations held in this country over works of public improvement viz: the Erie Canal, Atlantic Cable, and the Pacific Railroad. Of the three the latter was by far the more general.

The Poem by Bret Harte on this event is reproduced below:

What the Engines Said.

With a prefatory screech,
In a florid Western speech,
Said the engine from the West,
“I am from Sierra’s crest,
And if Altitudes’ a test,
Why I reckon its confessed,
That I’ve done my level best.”
“Said the engine from the East,
They who work best, talk the least,
Suppose you whistle down your brakes,
What you’re done is no great shakes.
Pretty fair, but let our meeting,
Be a different kind of greeting,
Let these folks with champagne stuffing,
Not the engines do the puffing.

“Listen where Atlanta beats,
Shores of-snow and summer heats.
Where the Indian Autumn skies
Paint the woods with wampum dyes.
I have chased the flying sun,
Seeing all that he looked upon,
Blessing all that he blest.
Nursing in my iron-breast;
All his vivifying heat.
All his clouds about my crest
And before my flying feet
Every shadow must retreat.”

Said the Western Engine, “phew!”
And a long whistle blew,
“Come now, really that’s the oddest
Talk for one so modest.
You brag of your East, you do,
Why, I bring the East to you.
All the Orient, all Cathay
Find me through the shortest way
And the sun you follow here
Rises in my hemisphere.
Really if one must be rude,
Length, my friend, ain’t longitude.”

Said the Union, “don’t reflect, or
I’ll run over some director,”
Said the Central, “I’m Pacific
But when riled, I’m quite terrific,
Yet today we shall not quarrel
Just to show these folks this moral
How two engines In their vision
Once have met without collision.”
That is what the engines said;
Unreported and unread,
Spoken slightly through the nose
With a whistle at the close.’ 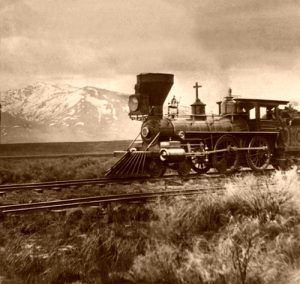 The first through train reached Omaha May 6th, arriving in two sections and bringing about five hundred passengers.

Although through trains were on regular schedule commencing with May 11th, it was not until November 6th, 1869, that the road was actually completed (according to Judicial decision.) Congress to make sure of the fact, authorized the President by resolution passed April 10th, 1869, to appoint a board of five “eminent” citizens to examine and report on the condition of the road and what would be required to bring it up to first class condition. This board duly reported in October 1869, that the line was all right, but that a million and a half could be spent to advantage in ballasting, terminal facilities, depots, equipment, etc. On the strength of which the wise-acres decided the road could not be considered complete and withheld a million dollars worth of bonds due under the charter act. It was October 1st, 1874, before the fact that the line was actually completed sifted through departmental red tape, and the Secretary of Interior on the further report of “three eminent citizens” discovered that the road had been completed November 6th, 1869 as reported by the previous board of five, and further that the total cost of the line had been one hundred and fifteen million, two hundred and fourteen thousand, five hundred and eighty-seven dollars and seventy-nine cents, as shown by the books of the Company.

For a while business was interchanged at Promontory, but it was but a short time until the two Companies got together and an agreement was reached by which Ogden should be the terminus, and that the Central Pacific Railroad Company should purchase at cost price two million, six hundred and ninety-eight thousand, six hundred and twenty dollars the line from a point five miles west of Ogden to the connection at Promontory. This five miles was subsequently sold to the Central Pacific Railroad. This arrangement was as the West puts it “clinched” by a Resolution of Congress, making Ogden the terminus.

Author & Notes: This tale is adapted from a chapter of a book written by William Francis Bailey, entitled The Story of the First Trans-Continental Railroad:  Its Projectors, Construction and History, published in 1906, by the Pittsburgh Printing Co. The tale is not 100% verbatim, as minor grammatical errors and spelling have been corrected. 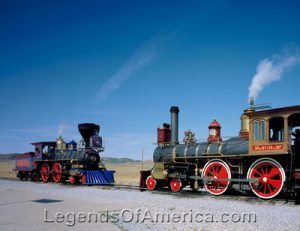 A meeting of the engines at the Golden Spike National Historic Site. Photo by Carol Highsmith