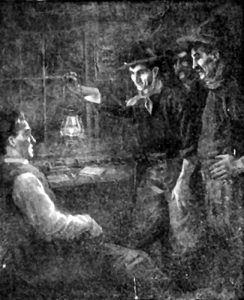 “One of them picked up the lantern, and swaggering  over to where I sat
all trembling….” Illustration from the book, Danger Signals by
John  A. Hill and Jasper Ewing Brady.

Overhead I could hear the crack of the rifles and the whoop of the Indians as the battle raged, back and forth. During a temporary lull, I heard the dispatcher calling me for dear life, but he could call for all I cared; I had other business just then—I was truly “25.” All at once I heard a bigger commotion than ever, there was a sound as if caused by the scurrying of many feet, and then all was quiet. I sat there wondering what was coming next, and how much longer I had to live when I smelled smoke, and in a second I knew the depot was on fire. I tried to raise the trap-door, but it had a snap lock and had been dropped so hard in my mad efforts to get away, that it was securely locked. Good God! was I to be burned like a rat in a trap? All was quiet save the crackling of the flames as they licked up the depot. Something must be done and quickly at that, or there would be one operator who would receive his congé in a manner that was anything but pleasant.

Feverishly, I groped around, and all at once my hand came in contact with the Winchester rifle. I grasped it by the barrel, and using it as a battering ram I started to smash that door.

The smoke by this time was stifling, suffocating, and already my senses were leaving me,—everything was swimming around before my eyes, but it was a case of life and death, and I hammered away with all my might. Finally, Crash! Ah! I had succeeded, the lock broke and in a moment I had pulled myself up in the office.

The side towards the door was all ablaze and escape that way was impossible, so I picked up a chair and slammed it through the window over the table, and climbed out taking a loose set of instruments with me. The wires were still working, and above the crackle of the flames, I heard “DS” still calling me. I reached in through the window and simply said,
“Indians—depot on fire—have saved a set of instruments—will call you later when I can fix a wire,” and signed my name, “Bates.”

My lungs were filled with smoke and felt like they had a million sharp needles sticking in them, but thanks to my lucky stars, I was not otherwise hurt. Everything appeared so quiet and still that I was dazed, but presently I heard a low mumbling of voices out to the westwards. I made my way thither and found the population (all that was left of it), assembled. When I staggered up to a group of the men, they turned on me like tigers, not knowing what kind of an animal I was. I recognized one of them who was commonly known as “Full-House Charley,” and weakly said, “Don’t shoot, Charley, it’s Bates the night operator at the depot.”

“Well! where the devil have you been all the time? When the depot was burning some of us went over there, but you’d gone someplace. We couldn’t save anything so we let ‘er burn. Your side partner, the day man, was killed and scalped.”

It appeared that just as the fight was the hottest, three troops of the U.S. Colored Cavalry, appeared on the scene, having been on the trail of this same band all day. They made short work of the red men who melted away to the fastnesses of the Mogollons, first setting fire to the depot, the troops in close pursuit. If there ever were faithful hard-working fighters in that country, it was these same dusky brunettes.

I told the gang where I had been, and in a few minutes, several of them went over to the station to help me rig up a wire. I knew the dispatcher’s wire, and taking a pole’s length out of another line, I soon made a connection to the instrument I had saved. It was no go—the wire was dead open. Then I rigged up a ground by running a wire to a pipe that ran down the well, and in testing, I found the wire was open west. I called up “DS,” who was east of me, and told him what a nice hot old time we had been having out there.

“Yes,” he said, “I knew there was trouble. Just after you told me about the Indians and fire, Clear Creek said their place was attacked by another band and things were getting pretty hot with them. Then the wire went open, caused as I supposed by your fire, but now it seems as if Baird is probably up against it as well.

A trainload of troops will come through in a short while to try and get beyond the Indians and cut them off. If you are able, I wish you would flag them and go over to Clear Creek and report from there. Disconnect and take your instrument and leave the line cut through. A lineman will be sent out from here in the morning. Everything is tied up on the road, and you can tell the C. & E. there’s nothing ahead of them, but to run carefully, keeping a sharp lookout for torn up track and burned trestles.”

My experiences had been so exciting and the smoke in my lungs so painful, that I was ready to drop from fatigue; but then I thought of poor Fred Baird and his family, and I said I’d go. The troop train came in presently and I boarded her. It did my heart good to ride on that engine with “Daddy” Blake at the throttle, and think that four hundred big husky American regulars were trailing along behind, waiting for something to turn up and just aching for a crack at the red men.

It was now about three o’clock, and just as the first rays of early dawn illumined the horizon, we came in sight of Clear Creek. There was a dull red glow against the sky, that told only too well what we should find. The place had not been as well protected as Blue Field, and the slaughter was something fearful. The depot was nothing but a smoldering mass of ruins, and but a short distance away we came upon the bodies of Baird, his wife, and two children, shot to pieces, stripped, horribly mutilated and scalped. It was sickening, and shortly after, when the troop train pulled out for Chiquito, the sense of loneliness was oppressing. A few people had escaped by hiding in obscure places and when they came out they went to work and buried the dead. I finally succeeded in getting a wire through and then, despite the heat, I slept.

The next day the troops corralled the Indians, gave them a good licking and sent them back to their old reservations. And yet in face of just such incidents as these, there are people who say that poor Lo can be civilized.

A construction gang came out and started to rebuild, and the company offered me a good day office if I would remain, but Nay! Nay! I had had all I wanted of Arizona, and I went back to Texas, thankful that I had a whole skin and a full shock of red hair. 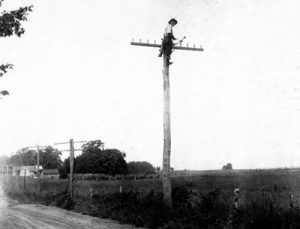 Author & Notes: This tale is adapted from a chapter of a book written by John A. Hill and Jasper Ewing Brady, entitled Danger Signals, first published in 1898, and again in 1902 by  Chicago Jamieson-Higgins Co. The tale is not 100% verbatim, as minor grammatical errors and spelling have been corrected.

An Encounter with Train Robbers (Hill and Brady 1898)

The Railroad in the American West (main page)