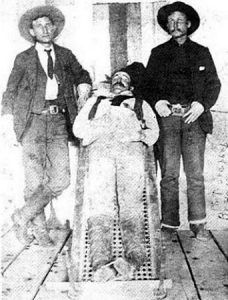 William “Tulsa Jack” Blake (18??-1895) – Blake was a cowboy in Kansas during the 1880s but later he wandered south into Oklahoma and by late 1892 he had joined up with Bill Doolin’s Wild Bunch. During the next two years, he would be involved with a number of train and bank robberies with other members of the gang. During this time he was a key figure in a gunfight with several lawmen at Ingalls, Oklahoma, on September l 1893, where the gang killed three officers. A posse led by U.S. Deputy William Banks finally tracked down the gang in Major County, Oklahoma on April 4, 1895. In a fierce gun battle that lasted almost 45 minutes, Blake was killed by U.S. Deputy William Banks when he tried to escape. The death of “Tulsa Jack” was the beginning of a violent end to Bill Doolin’s gang, as the rest of the gang would soon be killed or captured as well.

M. Blevins, aka: F.C. Marklin – After this Texas outlaw was captured and imprisoned, he escaped from the Texas penitentiary in 1884, at the age of twenty.

Dan Bogan – Having committed a number of crimes in Wyoming, Bogan later made his way to Texas, where he was indicted for murder in 1881.

G.C. Bolton – An Oklahoma cattle rustler, Bolton was captured by Sheriff Lake and Deputy Canton. Convicted, he was sent to prison in Lansing, Kansas.

William Bonney, aka: Billy the Kid, Henry Antrim, Kid Antrim, William Antrim, Henry McCarty (1859-1881) – Billy the Kid was an outlaw and gunfighter who participated in the Lincoln County War in New Mexico. According to legend, he killed 21 men, but, he is generally accepted to have killed between four and nine. He was killed by Sheriff Pat Garrett on July 14, 1881.

William James “Joe” Boot (18??-??) – Little is known about this “one-hit” outlaw, whose name is remembered in history only because of his stage robbery with the lady bandit, Pearl Hart. Thought to have been a farmer before meeting Hart in Arizona, he was working as a miner in Globe when the pair hooked up. Allegedly, he had been planning a train robbery for some time when Hart approached him, needing money for her ill mother. Instead of robbing a train, the two held-up a stagecoach between Florence and Globe, Arizona on May 30, 1899. Taking about $450 and a revolver, they were soon apprehended. Though Hart was sentenced to just five years, Boot was sentenced to 30 years in the Yuma Territorial Prison. However, just two years later, in 1901, he escaped. Thought to have fled to Mexico, he was never recaptured or heard of again.

Narciso Borjoques (18??-1871) – A California killer and robber, Borjoques usually murdered his victims with a shot in the head. He himself was shot and killed in a saloon brawl in 1871 while on the run for murdering and burning the bodies of a rancher & his family.

William Boucher – An outlaw and cowboy of Tombstone, Arizona, Boucher was suspected of stage robbery and killed on March 25, 1888, by Sheriff Billy Breakenridge’s posse.

Charles “Charlie” Bowdre (1848-1880) – A friend to Billy the Kid, Charlie fought alongside of him in the Lincoln County War. Though not known to have been involved in outlaw activities, his relationship with the gang made him suspect.

Charles E. Bowles, aka: Black Bart, Charles E. Boles, T.Z. Spalding (1830-1917?) – Best known as Black Bart, this Old West outlaw was noted for his poetic messages left after his robberies. He was a gentleman bandit, and one of the most notorious stagecoach robbers to operate in and around Northern California and southern Oregon during the 1870s and 1880s.

Reuben “Rube” H. Boyce – An outlaw in Kimble County, Texas, Boyd led a gang of rustlers. He was arrested for murder on January 24, 1878.

“Sport” Boyle – A gunman and outlaw, Boyle was a member of the Dodge City Gang in Las Vegas, New Mexico.

Abner Brasfield – At the age of 22, Brasfield killed Arkansas Justice of the Peace Bill Hamm when the two were arguing over land. The fleeing murderer was later captured and served four years in an Arkansas prison. After his release, he served as a peace officer in Eufaula, Oklahoma.

William Brazzleton (18??-1878) – Robbed stagecoaches in Arizona while wearing various disguises until he was killed in August 1878.

Henry Brent – A Montana, Brent was run out of Bannack, by vigilantes. He was later killed during a fight with Indians.

William B. “Curly Bill” Brocious (1845-1882) – An outlaw leader of the Clanton Gang of Arizona, Curly Bill was a vicious, drunken gunman, cattle rustler and murderer. After the Gunfight at the O.K. Corral, Brocious attempted to kill Virgil Earp and succeeded in assassinating Morgan Earp. Wyatt soon caught up with him and killed him on March 24, 1882.

Leonard Brock, aka: Calvert Brock, Will Waldrip, Joe Jackson, Henry Davis (1860-1890) – Born on July 13, 1860, Brock and his brother, W.L., joined the Burrow Gang in 1888 and aided the notorious brothers in a number of train robberies in Texas and Alabama. He was identified as one of the outlaws when the Burrow Gang robbed the Mobile & Ohio train on September 26, 1889. After a substantial reward was posted for him, he was arrested on a train in Columbus, Mississippi in July 1890. After a quick conviction, he was sentenced to a long prison term. However, he committed suicide on November 10, 1890, by jumping from the fourth tier of the cellblock.

“Bronco Charlie” – A Montana outlaw, Charlie was lynched by vigilantes near Miles City in the late 1880s.

George W. Brown (18??-1864) – An alleged outlaw, Brown was said to have been associated with Henry Plummer’s gang of Innocents. Probably born in Minnesota, he grew up to marry a Sioux woman and the couple had several children. During the Minnesota river uprising, he served as a scout under Lieutenant Colonel William Rainey Marshall. By 1863, Brown had found his way to Montana, where he was said to have been an influential member of the ruthless gang of road agents called the Innocents. On January 4, 1864, he and Erastus “Red” Yager were the first two victims of the newly organized  Montana Vigilantes. They were both hanged in Laurin, Montana, about 11 miles northwest of Virginia City. 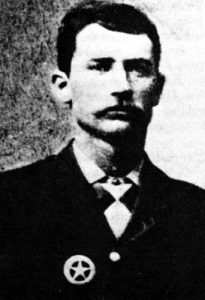 Henry Newton Brown (1857-1884) – A member of Billy the Kid’s Gang, Brown eventually turned lawman and became the city marshal of Caldwell, Kansas. Later, he turned again and was hanged.

Robert C. “Bob” Brown – Brown along with a gang of thieves attempted to rob a train at Fairbanks, Arizona in 1900. He was captured and sent to prison at Yuma. After his release, he disappeared.

“Long-Haired Sam” Brown – A gunman and outlaw in the Nevada mining camps, Brown killed fifteen men and was shot and killed on July 7, 1861.

William “Billy” Brown – A gunman, Brown killed his best friend, Robert Tate, on August 19, 1880, near Fort Sill, Oklahoma. Brown claimed that he was trying to defend himself against a man who had threatened his life and fired at a shadowy figure moving toward him, not knowing that it was his friend. He was later arrested in Texas and hanged at Fort Smith, Arkansas on September 9, 1881.

William Browning – An train robber in Illinois in the 1900s, Browning was killed in Texas while robbing a bank.

“Tex” Brunton – With the law on his tail, Brunton fled from Texas to California and Oklahoma.

Charles “Charlie” Bryant, aka: Black Face Charlie (18??-1891) – A member of the Dalton Gang, Bryant was killed in a gunfight with U.S. Deputy Marshal Edward Short, which left both men dead.

Rufus Buck (18??-1896) – A Creek Indian who had served time for minor offenses in the Fort Smith, Arkansas jail, Buck decided to make a name for himself in the summer of 1895. Forming the Buck Gang, he and four other men began to stockpile weapons before going on a ten-day murder and robbery spree in Indian Territory. Buck bragged to anyone who would listen that “his outfit would make a record that would sweep all the other gangs of the territory into insignificance.” Beginning on July 30, 1895, the outlaws killed U.S. Deputy Marshal Garrett when he tried to stop them from a store robbery in Okmulgee, Oklahoma. They then went on to rob a number of settlers in the next ten days, killing two more men, and raping two women. All five members were hanged at Fort Smith on July 1, 1896.

James “Coal Oil Jimmy” Buckley (18??-1871) – An stage robber and murderer in northern New Mexico. In 1871, he was calling Elizabethtown, New Mexico home and leading a series of stagecoach holdups on the road to Cimarron. His career was cut short when the town posted a $3,000 “dead or alive” reward. He was soon shot down for the reward. 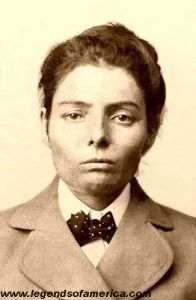 Laura Bullion, aka: Della Rose, Rose of the Wild Bunch (1876?-19??) – The girlfriend of Ben Kilpatrick, Bullion rode with the Wild Bunch. She was imprisoned in 1901. When she was released she lived the last years of her life in Memphis, Tennessee

Eugene Bunch, aka: Captain J. F. Gerard (18??-1892) – A school teacher turned to train robbery Bunch was always a gentleman during the time that he robbed trains for four years.

William “Billy” Bunton – Montana stage station manager, Bunton was thought to have been the 2nd in Command of Henry Plummer’s gang of Innocents. He was hanged by Montana Vigilantes. 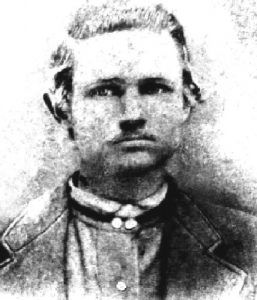 Matthew “Matt” Burts (18??-??) – A lawman and outlaw, Burts rode with Burton, Billie Stiles, and the Owens brothers. He was murdered in California in 1925.

Sheppard Busby – An ex-deputy marshal, Busby shot and killed U.S. Deputy Marshal Barney Connelly when the lawman tried to arrest him for adultery. Busby was hanged at Fort Smith, Arkansas on April 27, 1892.