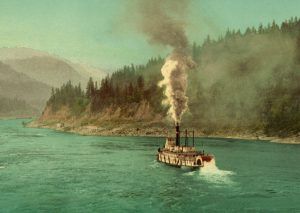 Columbia River below the Cascades

The Columbia is the great river of the territory, nearly all the others being its tributaries. Its northern branch, Clark River, from its source in the Rocky Mountains to near Fort Colville, is bounded by lofty wooded mountains. At Walla Walla, it unites with its other branch, the Lewis River, which is not navigable for even canoes. At the junction, the Columbia River is 1,286 feet above the ocean, and near three-fourths of a mile wide: it here takes its last turn to the westward, pursuing a rapid course for 180 miles, previous to passing through the Cascade Range, in a series of falls and rapids that obstruct its flow, and form during floods and insurmountable barriers to boat navigation, which difficulties were later overcome by portages. Locks and canals would be eventually used. From thence, there is still water navigation for forty miles, when its course is again obstructed by rapids. Thence to the ocean, 120 miles, it is navigable for vessels of twelve feet draught at the lowest stage of water. To the south of the Columbia River, the only three rivers of note, are the Umpqua, Rogue’s, and the Klamet.

The character of the great rivers is peculiar — rapid and sunken much below the level of the country, running as it were in trenches, and exceedingly difficult to get at in many places, owing to the steep basaltic walls. During high water they are in many places confined by dalles (narrows), which back the water, covering the islands and tracts of low prairie, giving the appearance of extensive lakes. The Dalles of the Columbia, 84 miles below Walla Walla, is a noted place, where the river passes between vast masses of rock. Oregon is well watered by springs, rivulets, and lakes. 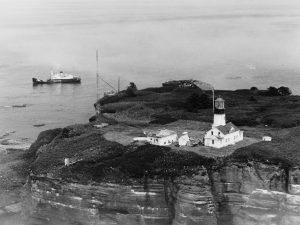 Entrance to the Strait of Juan de Fuca

The harbors are more or less obstructed by sand brought down by the rivers. The mouth of the Columbia River, formerly considered to be very dangerous from this cause, later proved to be less so than was supposed, and vessels of sixteen feet draught frequently entered and departed in safety, without pilots or buoys. The harbors of the Strait of Fuca are equal to any in the world, among which, that of Puget’s Sound on Admiralty Inlet, the bay running south from the strait, is noted.

It is almost impossible to give an idea of the extensive fisheries in the rivers, and on the coast. They all abound in salmon of the finest flavor, which run twice a year, beginning in May and October, and appear inexhaustible; the whole population lives upon them. The Columbia River produces the largest, and probably affords the greatest numbers. There are a few of the branches of the Columbia that the spring-fish do not enter, but, they are plentifully supplied in the fall. The great fishery of the Columbia is at the Dalles; but, all the rivers are well supplied. The last one on the northern branch of the Columbia is near Colville, at the Kettle Falls; but salmon are found above this in the river and its tributaries. In the rivers and sounds are found several kinds of salmon, salmon-trout, sturgeon, cod, carp-sole, flounders, ray, perch, herring, lamprey-eels, and a smelt called “skroic,” in great abundance; also large quantities of shellfish, including crabs, clams, oysters, and mussels, which are all used by the natives, and constitute the greater proportion of their food. Whales, in numbers, are found along the coast and are frequently captured by the Indians in and at the mouth of the Straits of Juan de Fuca.

An abundance of game exists, such as elk, deer, antelope, bears, wolves, foxes, muskrats, martins, beavers, a few grizzly bears and siffleurs, which are eaten by the Canadians. In the middle section or that designated by the rolling prairie, no game is found. In the eastern section, the buffalo is met with. The fur-bearing animals are decreasing in numbers yearly; indeed, it is very doubtful whether they are sufficiently numerous to repay the expense of hunting them. By the mid-1800s, the Hudson’s Bay Company had almost the exclusive monopoly of this business, though decreased, owing to being hunted without regard to season. This was not, however, the case to the north, in the British possessions; where the company was left to exercise their own rule and prevent the indiscriminate slaughter of either old or young, out of the proper season. In the spring and fall, the rivers are literally covered with geese, ducks, and other water-fowl. 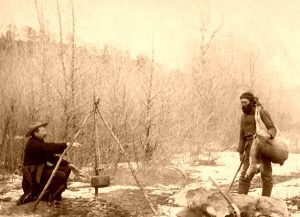 Fort Vancouver, on the Columbia River, and 90 miles from the ocean, was the principal seat of the British fur trade, and the headquarters of the Hudson’s Bay Company. It was a large stockade inclosing many buildings. Here, was a fine farm, workshops, mills, and a school. Astoria, or Fort George, is eight miles from the mouth of the Columbia River and had but two or three buildings.

In this neighborhood are forests of pine, which have long been noted for their beauty and size. Lieutenant Charles Wilkes spoke of them: “Short excursions were made by many of us in the vicinity, and one of these was to visit the primeval forest of pines in the rear of Astoria, a sight well worth seeing. Mr. Drayton took a camera lucida drawing of one of the largest trees. It conveys a good idea of the thick growth of trees and is quite characteristic of this forest. The soil on which this timber grows is rich and fertile, but, the obstacles to the agriculturist are almost insuperable. The largest tree of the sketch was 39 feet six inches in circumference, eight feet above the ground, and had a bark eleven inches thick. The height could not be ascertained, but, it was thought to be upward of 250 feet, and the tree was perfectly straight.” These trees, for at least 150 feet, are without branches. In many places those which have fallen down, present barriers to the vision, even when the traveler is on horseback; and between the old forest trees that are lying prostrate, can be seen the tender and small twig beginning its journey to an amazing height.

Fort Walla Walla, or Nez Perces, was on the south side of the Columbia River, ten miles below the mouth of Lewis River. Fort Colville Was on the south side of the Clark River, above Fort Okonogan. Okonogan and Spokane, on Spokane River, were the first fur trading establishments of the company of John Jacob Astor in Oregon. The mountains in the view, are part of the Blue Mountain range, which rises to a great height. Later, Fort Okonogan would be kept up as a depot for supplies and the Hudson’s Bay Company have various other trading-posts throughout the country.

The American settlements in Oregon were confined to the western section of Oregon and were principally in the beautiful and fertile valley of the Willamette River. Oregon City is 2,300 miles from St. Louis, on the east bank of the Willamette, just below the falls, at the head of navigation, and about 18 miles from the mouth of the river. It was is the largest town in Oregon in the 1850s. In 1848, it contained one Methodist and one Catholic church, a public library, one newspaper printing-office, one female boarding-school, one day-school, five stores, three hotels, two flouring and two sawmills, and 650 inhabitants. Later, it much increased in size. Milwaukie, Plymouth, Portland, and Salem, on the Willamette River, and Cascade on the Columbia River were both promising places. In 1848, the total white population was about 9,000: in 1850, it had probably doubled, owing, in measure, to the impulse it has received from the discovery of gold in California.

About the Author and Article: This article was a chapter in Henry Howe’s book Historical Collections of the Great West, published by George F. Tuttle, of New York, in 1857. Henry Howe (1816 -1893) was an author, publisher, historian, and bookseller. Born in New Haven Connecticut, his father owned a popular bookshop and was also a publisher. Henry would write histories of several states. His most famous work was the three-volume Historical Collections of Ohio. As he collected facts for his writing, he also drew sketches which helped create interest in his work. The article as it appears here is not verbatim, as it has been edited for the modern reader; however, the content remains essentially the same.