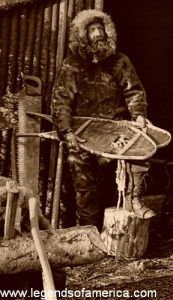 By the treaty for the purchase of Florida in 1819, the boundary between the Spanish possessions and the United States was fixed on the north-west at 42 degrees latitude, the present northern line of Utah and California; by this, the United States succeeded to such title to Oregon as Spain may have derived, by the right of discovery through its early navigators. In June 1846, all the difficulties in relation to Oregon, which at one time threatened war, were settled by treaty between the two nations. In general terms, the treaty established the northern boundary; British subjects were allowed the free navigation of the Columbia River, and the Hudson’s Bay Company and all British subjects, were to be continued in possession of whatever land or property they at that time held in Oregon.

The principal obstacles to a previous settlement had been the influence of that company. The English people at large knew little of, and took but slight interest in, the country. The British first, through the North West Company, and then through the son’s Bay Company (into which the former became absorbed), from 1814 up to 1840, had enjoyed the almost exclusive use of Oregon. The son’s Bay Company received from the British government to the exclusion of all other British subjects, the exclusive right to trade west of the Rocky Mountains, where the fur-bearing animals were more abundant than in any other part of the world.

The constitution of the Company is such as to secure knowledge and prudence in council, and readiness and exactness in execution. Their treatment of the Indians, admirably combined policy and humanity. Ardent spirits were prohibited from being sold to them; schools for the instruction of the Indian children, were established at each of the trading-posts, and hospitals for the sick; missionaries of various sects were encouraged and fostered; and all emigrants from the United States and elsewhere, were treated with the utmost kindness and hospitality. But, no sooner did any of them attempt to hunt, or trap, or to trade with the natives, than the competition of the body was turned against him, and he was compelled to desist. As the fur trade began to decline, the company turned its attention to agriculture, lumbering, fishing, and other pursuits. 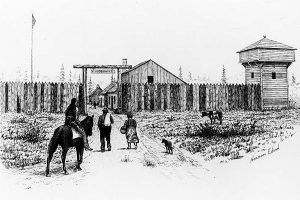 In 1841, the coast of Oregon was visited by the ships of the United Exploring Expeditions under Lieutenant Charles Wilkes. He arrived in the sloop of war Vincennes, off the mouth of the Columbia River, on the 27th of April; but, finding it hazardous to attempt the entrance, he sailed to the Straits of Fuca, the southern boundary of Vancouver’s Island, and anchored in Puget’s Sound, near Fort Nasqually, Washington from which he dispatched several surveying parties into the interior. One of these crossed the great westernmost range of mountains to the Columbia River; and having visited the British trading-posts of Okonogan, Colville, and Walla Walla, returned to Nasqually. Another party proceeded southward to the Cowelitz, a stream running south, and emptying into Columbia River about forty miles from the ocean. From the mouth of the Cowelitz, they went up the Columbia to Walla Walla, and down again to the ocean. In the meantime, other parties were engaged in surveying the coasts and harbors on the Pacific, the Straits of Fuca, and Admiralty Inlet; and particularly in exploring the valleys of the Willamette, emptying into the Columbia, and of the Sacramento River of California. During the performance of these duties, the sloop of war Peacock was lost on the bar at the mouth of the Columbia River; but the crew, instruments, and papers were saved.

At that time, Wilkes estimated the population to be: of Indians, 19,199; Canadians and half-breeds, 650, and the citizens of the United States, at 150. The Hudson’s Bay Company had 25 forts and trading stations in Oregon. Dr. John McLoughlin, the executive officer of the company, was kind to the American settlers, and although a Catholic, was noted for his hospitality to the Methodist and Presbyterian missionaries. The charter of the Hudson’s Bay Company precluding them from engaging in agriculture, its officers, agents, and servants organized another company for this purpose, with a capital of two million, called the Puget Sound Company. They began by making large importations of stock from California, and some of the choicest breeds from England. They entered into farming on an extensive scale. Almost all their trading establishments were later changed into agricultural ones, and all their stations and forts and the Russian ports, on the north, were then almost entirely supplied by them with wheat, butter, and cheese. 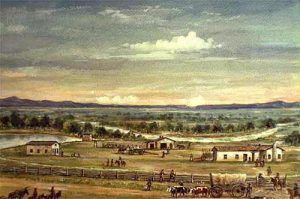 Among the most marked incidents in the history of Oregon, was the Cayuse War, in the winter of 1847-48. It grew out of these circumstances: The Reverend Dr. Marcus Whitman, a Presbyterian missionary, who, besides his religious duties, had established a fort and trading post in the Walla Walla Valley, and employed large numbers of Indians and emigrants in agriculture. Many of these Cayuse Indians had, under his guidance become partially civilized, and were good farmers. He was eminent for his hospitality to the newly-arrived and exhausted emigrants and was popular with all. His lady was also remarkable for her kindness, and at that time was administering to the Indians for the measles, which extensively prevailed among them. Many dying of the disease, they became suspicious that they were poisoned by the medicines given them by the Whitmans. On November 29, 1947,  at about noon, the Indians rushed into the fort, murdered Dr. Marcus Whitman and his wife, and thirteen others; took 61 persons prisoners, and burnt the fort and houses of the settlement. Upon the receipt of the news in the Willamette settlements, troops were raised, and the Indians defeated in three battles, and their villages and provisions destroyed. The prisoners were eventually released, through the praiseworthy efforts of Peter Sken Ogden, chief factor of the Hudson’s Bay Company.

Oregon was organized as a territory in 1848. It has an average width east and west, of about 680 miles, and north and south of 500 miles, giving an area of about 340,000 square miles. It is divided into three natural sections:

The first section is between the Pacific Ocean and the President’s Range or Cascade Mountains. The Cascade Range runs parallel with the sea-coast, the whole length of the territory, and is continued through California, under the name of the Sierra Nevada. It rises in many places in conical peaks, to the height of 12,000 and 14,000 feet, or over two miles above the level of the ocean. The distance from the seashore to this chain is from 100-150 miles; there were a few mountain passes, but, they were difficult, and could only to be attempted late in the spring and summer. The climate of this section is mild throughout the year, neither experiencing the extreme cold of winter or the heat of summer. The prevailing winds in the summer are from the northward and westward, and in winter, from the southward, and westward, and southeast, which are tempestuous. The winter is supposed to last from December to February. Rains usually begin to fall in November, and last until March; but, they are not heavy, though frequent. Snow sometimes falls, but, it seldom lies over three days. The frosts are early, occurring in the latter part of August; this, however, is to be accounted for by the proximity of the mountains. Fruit trees blossom early in April. The soil, in the northern parts, varies from a light brown loam to a thin vegetable earth, with gravel and sand as a subsoil; in the middle parts, from a rich heavy loam and unctuous clay to a deep heavy black loam, on a caprock; and in the southern (the Willamette Valley) the soil is generally good, varying from a black vegetable loam to decomposed basalt, with stiff clay, and portions of loose gravel soil. The hills are generally basalt, and stone, and slate; between the Umpqua River and the southern boundary the rocks are primitive, consisting of slate, hornblende, and granite, which produce a gritty and poor soil; there are, however, some places of rich prairie, covered with oaks. It is, for the most part, a well-timbered country. It is intersected with the spurs or offsets from the Cascade Mountains, which render its surface much broken; these are covered with a dense forest. The timber consists of pines, firs, spruce, oaks (red and white), ash, arbutus, arbor vitae, cedar, poplar, maple, willow, cherry, and tew, with a close undergrowth of hazel, rubus, and roses. The richest and best soil is found on the second or middle prairie, and is best adapted for agriculture; the high and low being excellent for pasture land. The climate and soil are admirably adapted for all kinds of grain—wheat, rye, oats, barley, peas, etc. Indian corn does not thrive in any part of this territory, as well as in the Mississippi Valley. Many fruits appear to succeed well, particularly the apple and pear. Vegetables grow exceedingly well, and yield most abundantly.

The Second or Middle Section is that between the Cascade and Blue Mountain Range. The Blue Mountains are irregular in their course and occasionally interrupted, but, generally running in a northerly direction; they commence in the Klamet range, near the southern boundary of the territory; they are broken through by the Saptin or Snake River, at the junction of the Kooskooskee River, and branch of it in hills of moderate elevation, until they again appear on the north side of the Columbia River, above the Okonogan River, passing in a northern direction, until they unite with the Rocky Mountains. The climate of the middle section is variable; during the summer the atmosphere is much drier and warmer, and the winter much colder than in the western section. Its extremes of heat and cold are more frequent and greater, the mercury, at times, falling as low as minus 18 degrees in winter, and rising to 108 degrees in the shade of summer; the daily difference of temperature is about 40 degrees. It has, however, been found extremely salubrious, possessing a pure and healthy air. No dews fall in this section. The soil is, for the most part, a light sandy loam; in the valleys, a rich alluvial; and the hills are generally barren. The surface is about 1,000 feet above the level of the western section and is generally a rolling prairie country. In the center of this section, and near and around the junction of the Saptin or Snake and Columbia Rivers, is an extensive rolling country, which is well adapted for grazing. South of the Columbia River, and extending to the southern boundary of the territory, it is destitute of timber or wood, unless the wormwood (artemisia) may be so-called, although there are portions of it that might be advantageously farmed.

The Third, or East Section, is that between the Rocky and the Blue Mountains. The Rocky Mountains commence on the Arctic coast and continue an almost” unbroken chain until they merge in the Andes of South America. That part forming the eastern boundary of Oregon, extending north from the Great South Pass at the Committee’s Punch-bowl Pass, forms an almost impenetrable barrier, the few passes between were very difficult and dangerous. The climate of the eastern section is extremely variable. In each day there are all the changes incident to spring, summer, autumn, and winter. There are places where small farms might be located, but they are few in number. The soil is rocky and broken and presents an almost unbroken barren waste. Stupendous mountain-spurs traverse it in all directions, affording little level ground. Snow lies on the mountains, nearly, if not quite throughout the year. It is exceedingly dry and arid; rains seldom falling, and but little snow. This country is partially timbered, and the soil much impregnated with salts.