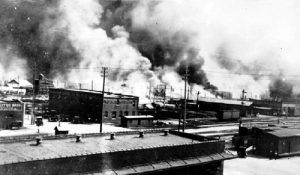 The whole thing began on May 30, 1921, when Dick Rowland, a black shoe-shine boy, was accused of assaulting Sarah Page, an elevator operator in the Drexel Building at Third and Main. Page claimed that Rowland grabbed her arm, causing her to flee in panic. A clerk at a nearby store insisted that Rowland had tried to rape Page. Accounts of the incident circulated among the city’s white community during the day and became more exaggerated with each telling.

Tulsa police arrested Rowland the following day and began an investigation. Following Rowland’s arrest on May 31, 1921, the Tulsa Tribune printed a story that Rowland had attacked her, scratching her hands and face and tearing her clothes. In the same newspaper that day was an editorial that stated that a hanging was planned for that night.

Tightly in the grip of the Ku Klux Klan, Tulsa wasted no time in forming a lynch mob that evening around the courthouse intent upon the execution of Dick Rowland. To stave off the lynch mob, the sheriff and his men were forced to barricade the top floor to protect their prisoner.

A group of blacks also converged around the courthouse in an attempt to defend Rowland. When a white man in the crowd confronted an armed black man attempting to wrest the gun from him, a scuffle ensued and the white man was killed. Immediately, a riot began. 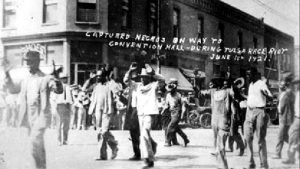 While the authorities detained a handful of white rioters, most black Tulsa
and soon found themselves led away at gunpoint and held under guard. Photo courtesy Department of Special Collections, McFarlin Library, University of Tulsa.

The outnumbered blacks began retreating to the Greenwood Avenue business district while truckloads of whites set fires and shot them on sight. Far into the early morning hours of the next day Black Tulsa was looted and burned by white rioters. The Greenwood District, known nationally as “Black Wall Street” for its economic success was a particular target.

Twenty-four hours after the violence erupted, it ceased. In the wake of the violence, 35 city blocks lay in charred ruins, over 800 people were treated for injuries, and almost 1,400 homes were destroyed. The losses of businesses included two theaters, three hotels, more than a dozen restaurants, several churches, and a hospital. Estimates of the dead range up to 300.

After the governor declared martial law, the National Guard troops arrived in Tulsa and began to round up more than 6,000 black people, placing them in various internment centers such as the baseball stadium, the Convention Hall and the Fairgrounds. Though the violence had ceased by the next day, many of the interred were kept for up to eight days.

After this terrible tragedy, dozens of black families left for more peaceful cities. Today, only a single block of the original buildings remains standing in the area.

In the meantime, Tulsa continued to grow as more and more oil fields were found. The mud-filled streets turned to brick as automobiles arrived and electric trolleys followed the neighborhoods as they developed further and further from downtown.

The lack of a good water supply was Tulsa’s greatest domestic problem which was solved when construction on the Spavinaw Dam began in 1922. The Dam and Lake Spavinaw State Park continue to provide water to the Tulsa area today as well as boating, fishing, picnicking and camping. 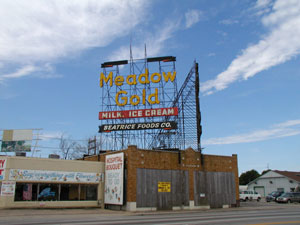 This picture of the Meadow Gold Sign in Tulsa, Oklahoma, taken on June 13, 2004, just three days before it was taken down. It was later moved down the street and is part of a city park. Photo by David Alexander.

Spawned by the rapidly changing demands of America, entrepreneurs, Cyrus Avery of Tulsa, Oklahoma and John Woodruff of Springfield, Missouri conceived of the grand idea of linking Chicago to Los Angeles and began lobbying efforts to promote a new highway. The federal government finally pledged to link small town U.S.A. with metropolitan capitals in the summer of 1926 and designated the road as Highway 66.

Aviation also became an important part of the city’s economy with a municipal airport and the Spartan Aircraft Company established in 1928. It was also during this year that the Oklahoma City Oil Field was discovered and began to produce enormous quantities of oil. This field, combined with the plentiful supply of petroleum from eastern Oklahoma, overwhelmed demand during the early years of the Depression.

During the early 1930s, growth in Tulsa, like many places across the United States, came almost to a complete halt. Few projects were built and construction stopped on Route 66. 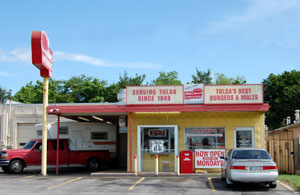 However, in 1933, thousands of unemployed men were put back to work and road gangs paved the final stretches of the Mother Road. By the mid-1930s, construction picked up and small houses were being built at the edge of the city limits. Soon the streetcar lines were replaced by the automobile and bus lines.

By 1938 the 2,300-mile super-highway Route 66 was continuously paved from Chicago to Los Angeles and Tulsa saw the beginnings of numerous cafes, service stations and motels springing up along the road.

When World War II broke out, Tulsa’s oil industries were converted to defense purposes and the 1940s brought another period of growth for Tulsa. Many aviation industries converted their factories to accommodate the war effort, and defense workers poured into the city. 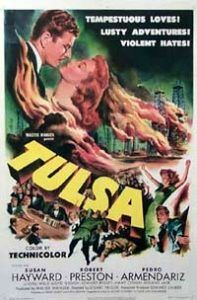 After World War II an increase in offshore drilling operations affected the petroleum industry in Tulsa. Fortunately, the aircraft and aerospace industry was beginning to blossom and today there are more than 300 aviation-related companies in the city.

On April 13, 1949, Tulsa hosted one of its biggest events ever when the Movie “Tulsa” premiered in the town that carried its name. The celebration featured a parade, which attracted over 100,000 people and featured Susan Hayward, Robert Preston, and Chill Wills. The movie was directed by Stuart Heisler and starred Susan Hayward, Robert Preston, Pedro Armendariz, Chill Wills, Ed Begly, Harry Shannon, Jimmy Conlin, and Paul E. Burns. The movie was about a rancher’s daughter who fought a one-woman war in oil-field country. In the end, the heroine won the struggle and built an oil empire. The movie was nominated for an academy award for Best Special Effects.

Another means of transportation came to Tulsa in 1970, when the Port of Catoosa opened. This linked Tulsa with the rest of the world via river navigation to the Mississippi River and the Gulf of Mexico. The Tulsa Port of Catoosa is one of the largest, most inland river-ports in the United States!

Today, Tulsa is the second-largest city in Oklahoma with a population of nearly 400,000. Threads of its Native American heritage, oil boom days, and icons of Route 66 are still visible throughout the modern city. 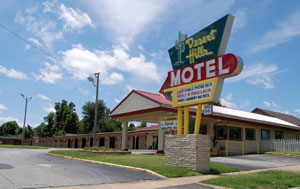 If you’re traveling the Mother Road through Tulsa, there are still lots of sites to see along the old route. Old motels dot the streets of 10th, 11th, and Southwest Boulevard. In the downtown area, there are many art deco buildings including the Warehouse Market at 925 South Elgin Avenue. The Warehouse Market was built in 1929, with bright colored terra cotta tiles enticing people to the farmer’s market. The depression closed it down but later it was reopened as the Club Lido during the Big Band Era. Beginning in 1938 it operated as a grocery store until the late 1970’s when it was abandoned and eventually boarded up. In the mid 1990s, the property was sold and was slated to be torn down until the Tulsa Preservation Commission stepped in and saved the face and tower of the original building.

Be sure to check out the Art Deco 11th Street Bridge and the magnificent new “East Meets West” statue nearby. In downtown, numerous Art Deco buildings date from the 1920-30s. The first oil well in Tulsa County sits behind Ollies’ Restaurant at 4070 Southwest Boulevard. You can also see a host of museums and dozens of other icons and attractions as you travel the Mother Road through this fine city.

Route 66 leaves Tulsa just south of the I-44 turnpike along Southwest Boulevard. Between Tulsa and Depew, old Route 66 snakes back and forth along I-44 for 40 miles as you pass by several small towns, abandoned motor courts and old cafes, many of which were built of native stone.