An old-timer drummer was seated in the bar room late last night at a downtown hotel waiting for the midnight train to return to San Francisco. He had attended to the trade that calls him here once in three months, and having nothing to do but kill time, was entertaining a friend with talks of the road. “It is easier traveling now,” he said, “than it was twenty years ago, but trade isn’t as good now, and it is harder work to make a showing.” Then he drifted into a comparison of the present with the past methods of locomotion, and said that in the earlier days, just after the opening of the overland railroad, there was a great deal of staging required, and during one season he traveled over 3,500 miles by stage in Utah, Idaho, Nevada and California, and over 7,000 miles by rail and steamer, and the further he traveled the more timid he became over stagecoach travel.

This, he explained, was not owing to any natural timidity inert within himself, but was due principally to the disappearance from the road of the crack whips that handled the ribbons during the times of the Pioneer and Overland lines, and the substitution of a cheap class of sheep herders on the short lines that sprung up as lateral feeders to the railroads. The old drivers had left a reputation and a romantic glamour clinging to their names that inspired their successors to the belief that a reckless swagger was all that was necessary for them to assume to add their names to the list of distinguished knights of the whip. But that couldn’t be. The old stock were the product of natural genius, and the high wages secured by the best resulted in the survival of the fittest, and placing in prominent position of such experts as Curly Bill, Dan Robbins, Ned Hudson, Si Hawley, Charles Levitt, Tom Stevens, Johnny Burnett, John Wilson, Billy Hodge, Baldy Green, Hank Monk, George Richmond, Con Denise, George Clinton, Vic, Dave Red, Smith Grey, Charlie Livermore, Billy Vosburg, and others further east. When the conditions changed and the companies could no longer pay $300 per month, the old stock drifted into the livery business or sought other fields, leaving behind them the tradition of departed glory. “And so,” said the drummer, “in the years from ’72 to ’75, I frequently rode over drives that nothing could tempt me to take again.

One of the most perilous that I now recall,” said he, “was in making the trip over the Greenhorn Mountains on the road from Caliente to Havilah in Kern County, California. There were seven of us passengers, six on the inside and one with the driver, on a thoroughbrace mud wagon that was just wide enough to hold two on a seat, and in fact, it seemed to be a very narrow tracked wagon for the side hill and neglected grade, when driven with the utmost care. But, in the hands of the drunken Texas cowboy who held the ribbons, it seemed as ready to upset as a bicycle. The driver was a man of large frame and of such great muscular strength that he was a terror dreaded by all the employees of the line, and domineered over them like a tyrant. 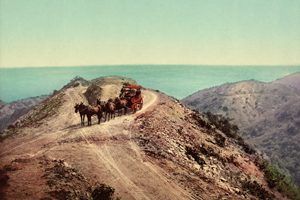 Of course, we passengers didn’t know this, and after supper, about 8 o’clock in the evening, at the Summit station, we rode away smoking our cigars in the best of humor, and unaware that the driver had been drinking while we were eating.

As we began descending the mountain the quarter moon was at times obscured by drifting clouds that produced a play of weird shadows among the wide branching oaks that covered the hillsides, and at times, in the dim light, it seemed to us that the stage was dangerously near the outer edge of the grade. As we were all old travelers this did not create any alarm until, with a startling ‘ki-yi’ from the driver, he started the team in a rapid run down the grade in a narrow and dangerous place. The stage rolled heavily to one side and raised on two wheels only, when I swung myself outside, clinging to the bows, and my weight held it an instant poised in the air. It was just long enough to disclose to me that the team was beyond control and going at increasing speed to sure destruction. I acted quickly to give the others a chance, and holding my breath, I leaped into the air and down the hillside in a moment of darkness from the obscured moon. I fell heavily on my neck and shoulders with my arms folded and head forward, and turning one somersault after another rolled down the steep embankment of loose soil until stopped by an uprooted oak. I sustained no damage except a shock, and a collection of lose soil in my face and clothing, and as soon as I could rise and shake myself up I followed on down the grade to the wreck. One passenger suffered a broken leg and arm; others were badly scratched and painfully bruised; the driver was dead.

The Messiah craze through which the west has just passed revives memories of the early Indian depredations in Nevada, when from the Sierras to the Wasatch, the only inhabitants were at the stations of the Pony Express Company. The stations were usually occupied by a hostler only, whose duties were light as they were lonesome, but demanded prompt attention, as they were required to have the pony ready for the passing rider to mount without delay as soon as he rode up, regardless of the hour, day or night. Over the lonely stretch from Ruby Valley to Reese River, was a station known as Grubb’s Wells that was reached coming west, at midnight.

On one occasion, the pony rider, a lithe and agile fellow named Reese Hawley, afterwards known as a crack whip on the Overland Stage Line, rode up and found the place in silence and darkness.

He had given the usual piercing “ki-yi” before reaching the station and expected the fresh horse to be in waiting, but there was no sign of life when he reached the door.

Supposing the hostler to be asleep, he dismounted, leaving the tired and foaming horse within arms reach, and opening the door, struck a match and before the flickering flame shot up, he made a step and stumbled over the dead body of the hostler. Hastily rising and realizing the danger from the Indians who must be near, he stepped outside to mount his horse and found him gone. He at once struck out with caution and in his moccasin feet stealthily escaped in the darkness, and as rapidly as he could, made his way through the hours of darkness towards Jacobs’ Wells in the Reese River Valley, which he succeeded in reaching the next day in safety. A search and relief party from there returned the next day to Grubb’s Wells and found the dead body of the hostler scalped, and the horses stolen.

They had taken the rider’s horse during the moment he was in the house, and how he escaped was a miracle, but undoubtedly was owing to his knowledge of the Indians ‘ habits and his caution in retreating.