It at once occurred to me that these books had been left by some weary pilgrim desirous of lessening his burdens in his Occidental wanderings; and I was beginning to speculate upon his history, when the hostler, who was quite a youth, entered and announced that the stage was nearly ready. Resolved upon the penetration of this delightful mystery this treasure in the wilds of the great interior desert I asked the young man who was the owner of the books. He modestly said “They belong to me;” and in reply to my rapid questions, he informed me that he was a graduate of a college in Indiana; that, seeking his fortune, he had come to the far West, met disappointment, as thousands had before him; and that, nothing better offering, and determined to earn his own living and to keep his misfortunes from the ears of his parents, he had accepted the humble place of hostler to the stage line. He was cheerful, hopeful; and the keen glance of his gray eyes, the eloquent compression of his finely chiseled lips, gave all the assurance that success with him was only a matter of time.

What a charming lesson for the curled darlings of languishing ease, raised and existing in luxury and idleness, without a thought beyond the glittering fashions and follies of the day. Here was manhood, stern courage, calm determination to conquer fate and a destiny a future full of moment to society, and of renown for its possessor. It will not surprise me to meet this boy hereafter in an exalted position. Of such stern stuff are most of our great men made; and from such humble positions have risen many of the noted men of the Pacific Coast.

But to the adventure of the night: As I have remarked above, there were nine of us; seven inside, and two with the driver. Upon the front seat was a Frenchman, named Lamoreux, and Ashley, Ex-Member of Congress from Nevada. On the middle seat were two army officers and a German. The back seat was occupied by myself and a man named Siebler, one of the discoverers of the Belmont mines, the largest of which had just been sold to a New York company for a million of dollars, Horace H. Day and others having been the purchasers. Like Comstock, who once owned the great lode which perpetuates his name, and which has yielded hundreds of millions of dollars, Siebler, was a poor prospector, and parted with his share of the claim for less than a song. The discovery of this section, ninety miles from Austin, was made by four men — Siebler, Billman, Straight and Smith — in October, 1865. Immediately, the four persons named above located their claims, according to law, and subsequently took possession of what is now known as the Highbridge lode.

Shortly after, Siebler sold out his claim to his companions for $200 in currency; and in a few months thereafter, Smith, Billman, and Straight sold out their entire interest to the Combination Company for $40,000. Prior to this transfer, Straight, who was the deputy recorder at the time, attempted to defraud his companions and get the whole interest into his own hands. He, therefore, destroyed the records establishing the true ownership, and in some other book recorded the claim as belonging entirely to himself. The forgery was so apparent that Straight was immediately arrested and taken to Austin. Here, he confessed the deed he had committed and was allowed to escape the law, and subsequently received $10,000 as his share of the pay. Mortified at the discovery of the base attempt on his part to commit a stupendous swindle, Straight shortly afterward departed for the East and has not since been heard of. Smith and Billman also went East to spend their money. Siebler, who sold out for $200, snored soundly by my side. Once he essayed a song and might have kept up his dismal serenade, possibly for some minutes, had I not hit upon the novel method of falling heavily against him at the first chuck-hole, which jammed all of his infernal melody out of him, and closed him up for several hours. 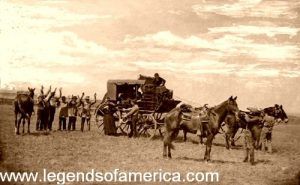 While half a dozen desperate highwaymen, each armed with a couple of six-shooters, and completely masked, were awaiting the arrival of the stage at a proposed place of action, the majority of the party inside were journeying in dreamland. I dreamed I was comfortably at home, until the exclamations, “Halt. Stop that stage!” “Throw out those express boxes!” caught my ears, and I then well knew that, instead of being in San Francisco, I was out on one of the great deserts of Nevada, and at the mercy of the knights of the road.

We were all awake in an instant. We knew the cause of alarm; we knew we were in the hands of the “road agents” some of us had been there before.

“Driver! ” ejaculated the robber-in-chief, a tall, well-masked fellow, “mind you, take good care of that team, and don’t move an inch until I give you orders.”

“For God’s sake, can’t you keep those horses quiet ? “roared the leader of the gang; ” Now, you man up there with the driver, throw down those express boxes and be very lively about it, too! ”

The man threw down the express boxes as if he had been an adept in the business.

“No. 2! ” shouted the chief to one of his accomplices, “you watch the horses; No. 3, go round to the other door; No. 4, stand here with me; Nos. 5 and 6, cover the rear. Get down here, you two men on the outside. No. 2, search them for arms. Hold up your hands, gentlemen, and let this fellow see if you’ve got any weapons about you. We will not hurt you; but we do not propose to take any chance of getting our own brains blown out for a few paltry twenty dollar pieces.”

A few seconds covered this whole performance, so far. The rascals surprised us round a curve, and in the twinkling of an eye we were surrounded, and a dozen six-shooters were leveled at our heads. The outsiders were unarmed, and taken to the rear of the stage, and placed one behind the other. Then Ashley, who understood the situation perfectly well, was ordered out. He had parted with his last ducat the night before at the intellectual game of “pitch seven-up ” and was a picture of composure. Then the poor Frenchman, who hesitated in his movements, was jerked out and placed in the rear of Ashley. I was the last passenger called for. I was searched for arms, and taken to the rear, and placed behind Siebler.

The moon looked down upon a party of nine gentlemen, with their hands up in the air, covered well by cocked revolvers, and willing to go peaceably home.