As the years slowly passed, revenues and traffic on the Las Vegas & Tonopah continued to decline. Daily service between Las Vegas and Goldfield was maintained until February of 1917 when tri-weekly service was substituted. Then, the problems brought about by World War I spelled the end of the line. Due to war shortages and efforts to economize, the Freight Traffic Committee of the U. S. Railroad Administration ordered that all perishable and merchandise traffic which formerly traveled via the Las Vegas & Tonopah would immediately be shipped only on the shorter Tonopah and Tidewater connections to the west coast. In other words, the Las Vegas & Tonopah was not allowed to haul anything but ore, and there was not much ore to be hauled. For a short while, the railroad was run by the Railroad Administration, but that body soon decided that the Las Vegas & Tonopah was “not considered essential or necessary to the uses of the Government,” and was turned loose.

By this time, it was a moot question whether the railroad was essential or necessary to anyone, and the end soon came. The Las Vegas & Tonopah had lost money every year since 1908, but never enough to make it consider abandonment of its lines. Revenues now plunged drastically and the road was faced with bankruptcy. The high prices paid for scrap metal during World War I stimulated Clark to salvage as much of his railroad as he could, and on September 18, 1918, he applied to the Railroad Commission of Nevada for permission to cease operations. On October 31st, the last train pulled off the line and the tracks were taken up and sold. With the demise of its line, the Las Vegas & Tonopah also abandoned its passenger station in Rhyolite, and one of the last surviving structures in that dying town entered the delinquent tax list.

Following the death of the Las Vegas & Tonopah, the Bullfrog-Goldfield Railroad returned to its old partner, the Tonopah & Tidewater, and the two roads combined operations. For all practical purposes, the Tonopah & Tidewater operated the line for the entire distance from Ludlow to Goldfield, for the Bullfrog-Goldfield had almost no rolling stock or engines left. Nevertheless, the railroad continued to operate as long as the Goldfield mines operated. As the 1910s gave way to the 1920s, those mines began to close down one after another, and revenues on the Bullfrog-Goldfield slowly and surely declined. Finally, in January of 1928, that railroad was also abandoned.

Thus the Tonopah & Tidewater, which had been the last railroad to reach the Bullfrog District, was left as the last and only railroad operating in the vicinity. As the gold mines in the region began to play out, the Tonopah & Tidewater relied more and more upon its borax mines in the vicinity for revenue. Other scattered clay, marble and talc mines contributed enough freight to enable the railroad to operate feebly through the 1910s and the 1920s, and the road became a lifeline to the scattered population of the southern Nevada desert.

But towards the latter part of the 1920s, the borax mines began to close, and the life of the Tonopah & Tidewater was threatened. The Borax Consolidated Company, the parent of the Tonopah & Tidewater, continued to operate the road at a loss, preserving the rails and stock in case of future need, but heavy losses year after year became too much for it to handle. In 1938, the Tonopah & Tidewater applied for permission to abandon its lines. Local patrons of the road caught the ears of their politicians, and approval of the abandonment was delayed for several years, as means were sought to keep the line operating. But those efforts were ultimately unsuccessful, and on June 14, 1940, the Tonopah & Tidewater ceased operations. The railroad tracks were left in place for two years, in hopes that the railroad could resume, but the need for scrap metal during World War II caused them to be salvaged in 1942 and 1943. The last Bullfrog district railroad had finally died.

The demise of the railroads did not end their influence upon the transportation history of southern Nevada, for, during the early days of highway construction in that state, the old roadbed of the Las Vegas & Tonopah was designated as part of the state highway system. When construction of U. S. route 95 between Las Vegas and Carson City began, which was the first major north-south highway through the state, the road was built along the old grade of the Las Vegas & Tonopah from Las Vegas to Beatty. Today, the traveler heading north out of Las Vegas towards Beatty and Carson City will travel along the same line which carried so much hope and optimism during the days of the Bullfrog boom.

Due to the use of the old Las Vegas & Tonopah grade as a base for highway 95, all traces of the railroad bed have disappeared between Las Vegas and Beatty. Still visible to the visitor, however, is the old “high line” which ran from Beatty into Rhyolite and then through the Bullfrog hills to the north. This portion of the road, which was the first part of the railroad to be abandoned in 1914, winds for twelve miles through Death Valley National Monument. For most of this distance the old grade is clearly visible against the desert floor, and with its cuts and fills is in quite good condition, considering the ravages of time and weather. 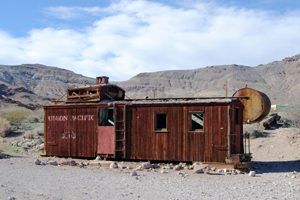 With a few exceptions, today’s visitor may walk or drive on the old roadbed from Rhyolite to the Original Bullfrog Mine, up through the cuts towards Mud Summit, north to Currie’s Wells and on north out of the Monument’s boundaries. The walk is a haunting one, for while tracing the route on its lonely way across the desert landscape, one can almost he the whistle and rumbles of trains gone by. Just north of Mud Summit, more concrete evidence of the past may be found in the ruins of an old section camp. Here, where the helper engines were dropped after the trains had climbed the grade up the “high line,” may be found the site of several edifices which supported the railroad. Concrete foundations, a ground cistern and what is probably the foundations of an old water tank mark the spot. While there is not enough left at the site to make it particularly significant in itself, its location along the railroad grade makes it worthy of protection.

Rhyolite – Little More than a Memory