Grading work on the “high line” between Beatty and Rhyolite began during August of 1906, and the rails in the meantime slowly crept up the already completed grade towards. Beatty. On October 7, 1906, the first work train pulled into Gold Center on its completed tracks, and two weeks later the railroad was completed as far as Beatty. Clark had won his race, for he entered the Bullfrog District a full six months ahead of his competitors. Beatty, as usual, held a wild and grand Railroad Day Festival, and all Bullfroggers joined in the celebration, for their town was at last connected with the outside world.

In the middle of November, work on the laying of rails between Beatty and Rhyolite commenced, and on December 14, the first Las Vegas & Tonopah train pulled into the east end of Rhyolite. Freight shipments immediately followed the ceremonial first train, and long-awaited carloads of lumber, supplies, and mine and mill equipment began to arrive. The completion of the railroad freed the Bullfrog District from the exorbitant freight rates necessitated by long mule-team hauls over the desert, and a veritable building boom got underway, as Rhyolite began to change from a tent city to a more permanent town. Within a week of the arrival of the first train, over one hundred cars stood on the yard tracks in Rhyolite, and more were coming in each day. As soon as the confusion was somewhat cleared, the Las Vegas & Tonopah extended its track through town, before putting a halt to the laying of rails. Further construction, it announced, would await the completion of grading work in the vicinity of Goldfield.

In March of 1907, the first regular Pullman service between Los Angeles and Rhyolite was inaugurated, with daily trains. Grading work around Goldfield progressed, and the town of Rhyolite breathed a sigh of relief as it became evident that it would indeed be on the main line of the railroad, and not be left dangling at the end of a branch line. Then, in April, the Bullfrog-Goldfield Railroad finally finished its line into Beatty. Although the event was not met with nearly the degree of enthusiasm which had heralded the arrival of the Las Vegas & Tonopah, it actually had much more significance, for the north-south rail line through Nevada was now complete. True, it was necessary for passengers to change trains five times between Carson City and Las Vegas, but for the first time, it was possible to make the trip in relative comfort and speed. 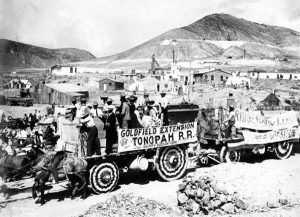 By the end of May 1907, grading of the Las Vegas & Tonopah line to Goldfield was almost complete, and work began again on the laying of the tracks. During June the railroad slowly extended itself out of Rhyolite, around the Bullfrog Hills, and to the north towards Goldfield. By the middle of August, the rails were completed through the entire Bullfrog District and were extended as far north as Bonnie Claire, a third of the way between Rhyolite and Goldfield. Construction continued despite the financial problems brought about by the Panic of 1907, and on October 26, the ceremonial final spike was driven at Goldfield, marking the completion of the Las Vegas & Tonopah tine. Few citizens, however, were in a mood to celebrate.

Four days later the Tonopah & Tidewater Railroad entered Gold Center from the south and linked its tracks with those of the Bullfrog-Goldfield. Not surprisingly, the two railroads soon announced plans for joint cooperation, and Goldfield and the Bullfrog District were thus served by two complete southern lines. Potential passengers and shippers could travel the Las Vegas. & Tonopah all the way from Goldfield to Las Vegas, where connections to the west coast and the Rocky Mountains were possible, or they could take the Bullfrog-Goldfield to Beatty and switch there to the Tonopah & Tidewater for the trip to Ludlow, California, with similar east-west connections at the southern terminus. Although the Las Vegas & Tonopah had been the first railroad to arrive in the district, the Tonopah & Tidewater immediately gained an advantage over its rival, for the latter’s connections to, the west coast was quicker and more economical. The Las Vegas & Tonopah countered by advertising that its route went “all the way” and that passengers would be spared the necessity of changing trains in Beatty.

Now, that the race was over, the competing roads settled down to business–hoping that the market for hauling in supplies and equipment and hauling out ore would justify the costs of construction. The Las Vegas & Tonopah concentrated on improvements to its property, including the rail yards at Rhyolite and its passenger station, which was finished in June of 1908. Although events would prove that passenger traffic never warranted the construction of such a large station, the company reaped short-term benefits of publicity for being the owner of what was rightly called one of the showplaces of the southern Nevada desert.

Unfortunately, traffic volumes on all the railroads serving the Bullfrog District proved to be lighter than expected, since the district never became the producer as had been predicted during the early years of the boom. The Las Vegas & Tonopah made a small profit during the first year of operation, but that was the last year that it did. Due to its decision to utilize the “high line” in order to tap the mines of the Bullfrog Hills, the Las Vegas & Tonopah was saddled with heavier operating expenses than were its rivals, since all northbound trains were required to stop at Beatty and add an extra engine in order to negotiate the climb into Rhyolite. The ore from the high line never reached the predicted levels, and thus the railroad was left with the excessive costs of construction, without the ensuing profits from heavy ore shipments.

Although both the Bullfrog-Goldfield and the Tonopah & Tidewater were experiencing much of the same problems, their shorter and cheaper route to the west coast helped them maintain higher shipping volumes than the Las Vegas & Tonopah was able to manage. In addition, “Borax” Smith had a monopoly upon the shipment of ores from his borax mines along the route of the Tonopah & Tidewater, which helped the revenues of that road considerably. As a final burden, the railroads were burdened with poor public relations. Almost as soon as the railroad days celebrations were over, miners and businessmen began complaining about the high freight rates charged by all the lines. As the mines developed into very low-grade propositions, freight rates announced in previous years began to look like highway robbery. Although the miners had a small point, for the prevalent rates made many mines unprofitable, most of the Bullfrog District mines would have had to be given free shipment of their ores in order to stay in business. Although all the railroads lowered their rates from time to time, no one was ever satisfied. The sentiment that the railroads were making huge profits seemed to predominate from Rhyolite to Tonopah, and as a result, the property of their lines was heavily taxed. The Las Vegas & Tonopah, for example, paid taxes to Nye County amounting to $11,942.70 at the end of 1907.

To make a sad story short, the Bullfrog railroads–and in particular the Las Vegas & Tonopah–declined in direct ratio to the decline of the Bullfrog District. Passenger and freight traffic fell off as mines closed and miners left town. The exodus had a ripple effect, for a smaller population in the district meant that fewer supplies were hauled in to support the remainder. A similar story was affecting the gold camps to the north, for although both Goldfield and Tonopah far out-lived Rhyolite, mines in those northern camps had passed their peak by the 1910s and were beginning what would be a much longer period of decline. In 1911 the Tonopah and Goldfield Railroad offered to sell its line to the Las Vegas & Tonopah, thus giving the latter a direct line through most of Nevada. Senator Clark was interested, but following the death of his son on board the Titanic in April of 1912, he turned apathetic towards business affairs, and the matter was dropped. 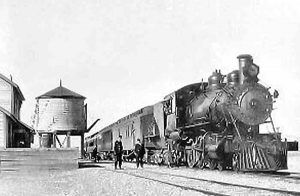 Matters were now becoming serious, and it became evident that unless the three competing lines were somehow consolidated, that all three would fail. The smallest of the three, the Bullfrog-Goldfield, was the first to take action, but its attempt to sell itself to the Tonopah and Goldfield Railroad fell flat. The Las Vegas & Tonopah then stepped in and the two railroads made plans to consolidate their lines. Since both roads had tracks running between Beatty and Goldfield, the decision was made to utilize the best parts of each line, and to abandon the remainder. Accordingly, the Las Vegas & Tonopah tracks would be used from Goldfield to a point just south of Bonnie Claire, where a shift would be made to the Bullfrog-Goldfield tracks from there south to Beatty. This move would cut maintenance costs for both lines and would enable the Las Vegas & Tonopah to avoid running its trains over the costly “high line” from Beatty through the Bullfrog Hills. Through service would run through Beatty, bypassing Rhyolite completely, although that town would still be served by a short branch line. All the track west and north of Rhyolite, however, which includes the section of track which ran through the present boundaries of Death Valley National Monument, was abandoned.

The plans were approved by the Railroad Commission of Nevada, despite the protests of Rhyolite citizens, and the new combined route went into effect in June of 1914. For the first time, the Bullfrog-Goldfield Railroad made a profit–ironically, much of it came from hauling ripped-up tracks and ties from its old roadbed north to Goldfield for salvage. The Las Vegas & Tonopah, however, was not so lucky and continued to run in the red. Service over the remaining portion of the “high line” from Beatty to Rhyolite was finally discontinued in 1916, and the rails were removed.