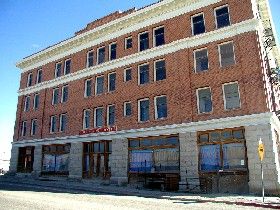 In the almost ghost town of Goldfield, Nevada, is the historic and reportedly very haunted Goldfield Hotel. Goldfield was born when gold was discovered in 1902, and within just a few short years, it became the largest city in Nevada, as millions of dollars in ore were extracted from area mines. Like other cities, whose only reason for being was its mining industry, when the ore played out, so did the town. In addition to its numerous saloons, the city once boasted three newspapers, five banks, a mining stock exchange, and a population of nearly 35,000.

However, just eight years after Goldfield was founded, the volume of ore began to decrease, and many of its residents began to move on to more prosperous claims.

By 1920, the gold was almost gone, and the town was reduced to just about 1,500 people. Three years later, a devastating fire wiped out 27 blocks of homes and businesses. Today, this once-thriving city supports a population of less than 500 but still provides several views of its prosperous past, with its centerpiece being the Goldfield Hotel.

In 1908, the Goldfield Hotel, designed by Architect George E. Holesworth, opened amidst an array of fanfare. Built on the former site of the Nevada Hotel, which had burned down in a fire in 1905, the hotel was first owned by J. Franklin Douglas and several other investors. The four-story building of stone and brick cost over $300,000 to build and included 154 rooms with telephones, electric lights, and heated steam. The lobby was paneled with mahogany and furnished in black leather upholstery beneath gold-leaf ceilings and crystal chandeliers. The hotel imported chefs from Europe and boasted one of the first Otis elevators west of the Mississippi River. Considered the most luxurious hotel between Chicago and San Francisco, it appealed to society’s upper crust, making it an immediate success.

However, shortly after the hotel was built, it was sold to mining magnate George Wingfield, the primary owner of the Goldfield Consolidated Mines Company, and hotel entrepreneur Casey McDannell. They created a new hotel corporation called Bonanza Hotel Company. After paying $200,000 cash and stock valued at around $250,000 for the hotel, the Goldfield property was merged with existing hotels owned by McDannell into the new Bonanza Hotel Company. 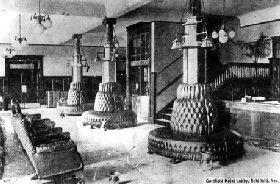 Though George Wingfield owned a majority interest in the Bonanza Hotel Company, his principal partner, Casey McDannell,  managed and operated the hotel. As the Goldfield Consolidated Mines Company owner, Wingfield was a multi-millionaire by the age of 30 and became a political powerhouse in the State of Nevada. After making his fortune in the goldfields, he went on to own a chain of banks, numerous ranches, and several Reno hotels, in addition to his interest in the Goldfield Hotel and the Bonanza Hotel Company. Active in political party circles in the 1920s, he became the reputed boss of both the Democratic and Republican parties. George Wingfield’s power was legendary in his own time and was publicly demonstrated when the collapse of his twelve banks in 1932 almost led to the economic ruin of the state.

In 1923, the Goldfield Hotel was sold to Newton Crumley, another hotel entrepreneur who owned the Commercial Hotel in Elko, Nevada. Crumley, who also aspired to profit from the gold in the area, dug two mine shafts beneath the hotel in 1925. However, both resulted in “dry holes.”

When Goldfield was in its heyday, the hotel entertained all manner of affluent guests. However, as the gold began to play out and Goldfield’s population diminished, the Goldfield Hotel began a gradual decline. By the 1930s, when the town supported fewer than 1,000 souls, it had become little more than a flophouse for cowboys and undiscriminating travelers. It housed Army Air Corp personnel assigned to the Tonopah Air Base 25 miles north of Goldfield during World War II. After the soldiers checked out of the hotel in 1945, the hotel closed its doors forever. It was listed on the National Register of Historic Places in 1982 as a contributing property in the Goldfield Historic District.

Over the years, the hotel has changed hands numerous times, with each new owner promising to restore and reopen the old property. In 1985, the building was bought by a San Francisco investor named Lester O’Shea, whose plans looked like they might come through. However, after a few years, when his restoration project was about 85% complete, his company went bankrupt, and the property reverted to the county. In 2003, the county auctioned off the old hotel and nearly ninety other parcels of historic land. A rancher from Carson City named Edgar “Red” Roberts was the only bidder and bought the hotel for $360,000. 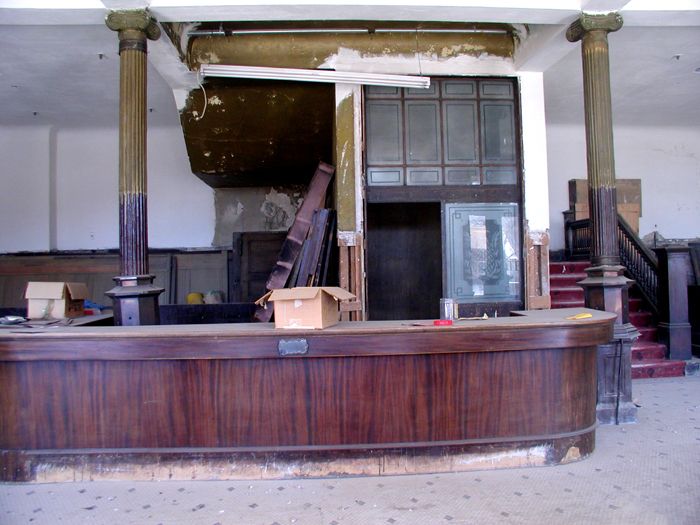 Reportedly, Roberts plans to finish the refurbishing of the bottom two floors, spending an estimated $1 million to reopen the historic hotel. The restoration project would include 40 guest rooms, a casino, and a café. The dying town of Goldfield is pinning its hopes on Roberts, knowing that the reopening could revitalize the town with new jobs and tourism. However, they’ve heard it so many times; they’re not holding their breath until they see it complete. When updating this story in September of 2015, we couldn’t find any indication of significant progress.  We found that work has been hampered by vandalism over the past few years, which is likely due to its spooky history and the attention it has attracted.

Reportedly there are several ghosts at the old hotel, the most famous of which is a woman named Elizabeth*.  According to the legend, Elizabeth was a prostitute that George Wingfield visited frequently. When she turned up pregnant, she claimed the child was Wingfield’s, who for a while paid her to stay away, fearful of how the scandal might affect his business affairs. However, when she could no longer hide the pregnancy, Wingfield was said to have lured her into room 109 of the hotel, where he chained her to a radiator. Supplied with food and water, she was left there until her child could be born. Reportedly she cried out over and over for mercy, only to be met with silence. Some say that Elizabeth died in childbirth, but others contend that Wingfield murdered her after the child was born. Her baby was then thrown into an old mining shaft. Afterward, rumors abounded that Elizabeth continued to visit Wingfield, and the sound of a crying child could sometimes be heard coming from the depths of the hotel. 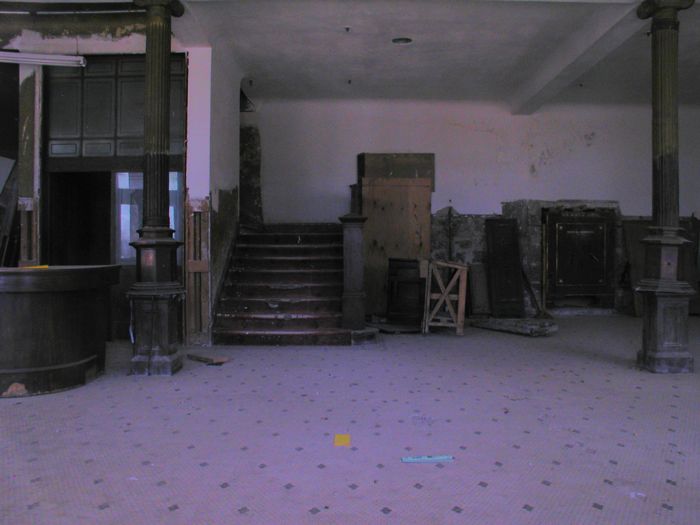 This legend, however, has a few problems that don’t “mesh” with the history of the old building. The legend asserts that Elizabeth died sometime in the 1930s, at which time Wingfield no longer owned the hotel. It also alleges that the baby was thrown into one of the mining shafts beneath the hotel, which were built by Newton Crumley some two years after he purchased the property from Wingfield in 1923.

In any event, the legend persists, and when the apparition of Elizabeth has been sighted, she has been described as having long flowing hair, wearing a white gown, and looking sad as she paces the hallways, calling out to her child. Others have reported her being sighted in Room 109, which is often described as being intensely cold, and on one occasion, a ghostly figure appeared in a photograph of the room. However, most people report that while their cameras function normally everywhere else in the hotel, they refuse to work in room 109.

In what was once the main dining room, called the Gold Room, an evil spirit, familiarly named “The Stabber,” is said to randomly attack those who cross the threshold with a large kitchen knife. Though the Stabber has never harmed anyone, he is said to have frightened many before immediately disappearing after the “attack.”

Near the lobby staircase, linger three small spirits, including two children and a midget that are said to be pranksters, sneaking up behind people and tapping their backs before giggling and dancing away.

Finally, George Wingfield himself is said to haunt his old hotel, making his presence known by his cigar smoke. Others have reported finding fresh cigar ashes in his first-floor room. His presence has also been sensed near the giant lobby staircase. This legend, too, has some problems with the history of the old hotel, as Wingfield was not known to frequent the hotel, as it was managed by his partner, Casey McDannell, and Wingfield’s interest was only as an investor. Additionally, Wingfield died in Reno, Nevada, in 1959. Why would his spirit continue to linger at the Goldfield Hotel? 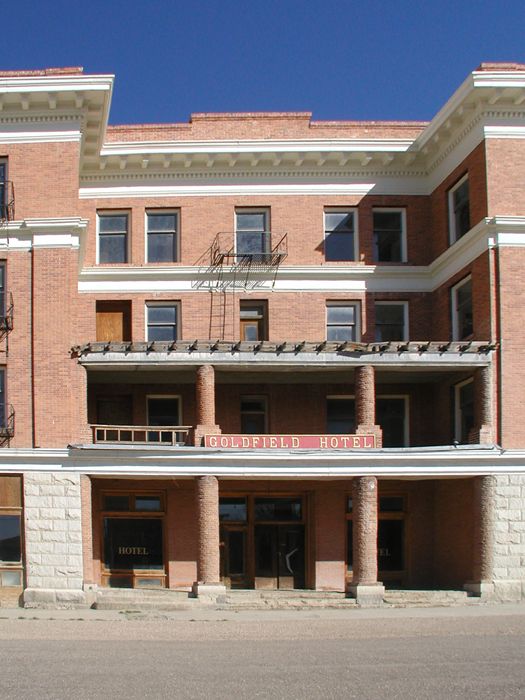 Many psychics who have visited the old hotel claim that it is a gateway into another world. The old hotel has been featured on several paranormal investigation television shows.

* Reader Update, April 2009:  The legend of Elizabeth in the Goldfield Hotel is just that, a legend. If a story is told enough times, it becomes ” true ” as time goes by.” I am a direct relative of Martin Duffy, owner of the Florence Mine. During the heyday of the Goldfield Hotel, my great uncle lived in the hotel. At that time, everyone shared a restroom. My great uncle married the elevator operator, Ruth Duffy. As you know, the Goldfield Hotel had a working elevator that still works to this day. There was no Elizabeth; it was just a rumor created to inspire people. My great uncle lived in the hotel during the time of G. Wingfield, and there was no Elizabeth in the hotel. Besides, he moved to Reno shortly after buying the hotel. — Terri Stewart, April 2009.

* Reader Input, April 2011:  My great-grandfather on my mother’s side of the family wallpapered and painted the interior of the Goldfield Hotel. He stayed in the hotel while doing his work, while his family remained in Bishop, CA. When the hotel was completed, Pres. Teddy Roosevelt came to the opening festivities, which supposedly included a waterfall of Champaign down the hotel stairs. My great-grandfather met with and shook the president’s hand during these ceremonies, and he also purchased a German-made “Teddy Bear” as a gift for my grandmother. That stuffed bear is in possession of my mother now. – Ernest Tufft, April 2011

*** Note: Legends of America is in no way affiliated with the Goldfield Hotel nor has any contact information for the present owner.