The year of 1907 was another good one. Fifty cars of freight per day were arriving over the Las Vegas & Tonopah in February. The town had grown to a population of 3,300, and lots at the heart of town were selling for as much as $10,000. A school census was taken which showed 250 children of school age, so a wooden schoolhouse was built. A concrete and steel jail was also built. The Rhyolite Stock Exchange was incorporated and opened on March 25th, to ease the effects of feverish stock trading on the over-worked telegraph wires to Goldfield and San Francisco. In June, the Bullfrog-Goldfield Railroad came into town, opening rail connections with the north, and in September, electric power was brought into Rhyolite over the poles of the Nevada-California Power Company. The power was hooked into the already-wired homes, stores and offices of Rhyolite, as well as into the machinery of the big Montgomery-Shoshone mill, which soon began operations. Another newspaper, the Rhyolite Daily Bulletin appeared to compete with the district’s three weekly papers. Production figures for the district went over $100,000 for the first time during the month of September, and the arrival of the Tonopah & Tidewater Railroad the next month, augured even more prosperity.

Even the Panic of 1907, which some would call a depression, did little to dampen the spirits of Bullfroggers. Newspapers noted, almost with wonder, that the panic seemed to affect the Bullfrog District much less than it did other mining camps in Nevada and California. The local banks were forced to issue script for a few months, due to the shortage of cash, but the local merchants gladly accepted it — even advertised for it — and the panic was put down to the manipulations of greedy eastern financiers. Despite the panic, property values continued to go up and the year-end tax rolls reflected the prosperity of the young town, which was assessed taxes on almost two million dollars worth of real and personal property.

1908 also opened with a bang, with the big Montgomery-Shoshone mill treating 200 tons of ore per day, and with the promise of more mills to open soon, thus increasing the district’s production and prosperity. To house all this money, the grand three-story, $60,000 John S. Cook Bank Building was completed in Rhyolite in January. By February, all the banks were back on a cash basis, and reported that they had needed only half the amount of script which had been printed for use during the Panic. Production soared as new mills and mines went into operation, reaching an estimated $170,850 in the month of April. By September, the Bullfrog District ranked as the third largest producer in Nevada, trailing only Goldfield and Tonopah. The Las Vegas & Tonopah Railroad finished its magnificent passenger station in June, which immediately became one of the showcases of the southern Nevada region. 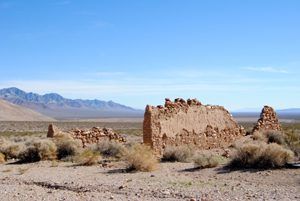 Construction continued, as the three-story concrete and stone Overbury building was completed in December at a cost of $50,000. Now at its height, Rhyolite fairly bustled with activity. The newspapers enthusiastically claimed a population of 12,000, although a more probable estimate would be 8,000. By this time, the town boasted an opera house, a new $20,000 concrete and steel, two-story school building; hotels, ladies’ clubs, and even a swimming pool. The large concrete and stone buildings which dominated the main streets were flanked by hundreds of wooden stores, offices and residences, although a few late-arrivals still lived in tents on the outskirts of town. The Western Federation of Miners’ local union, with its healthy membership, union hall and hospital, threatened to surpass the local union at Tonopah.

Rhyolite even had a manufacturing base of two foundries and machine shops, and the Porter Brothers, leading merchants, had built their original tent store into a imposing building complete with freight elevators and a stock worth $100,000.

Dance halls and brothels, ever a sign of prosperity in a mining camp, spilled over from their assigned districts on several occasions, drawing the attention of the town council. By the end of the year, the Rhyolite Herald estimated the total production for 1908 as close to $1,000,000.

In the meantime, the Rhyolite and Bullfrog boom were having much the same effect upon the surrounding Death Valley area as Goldfield and Tonopah had had upon the entire state. Spurred by the Bullfrog boom and dreams of wealth, prospectors swarmed out of Rhyolite into the hills and deserts of southeastern Nevada and southwestern California. Backed by flush Rhyolite merchants and promoters, these men examined the countryside as it has never been examined before or since. For a while, the results seemed almost too good to be true, for strikes and mining camps blossomed out of the wilderness everywhere. On the east side of Death Valley, the entire South Bullfrog District grew up around the Keane Wonder Mine, while farther to the south arose the boom camps of Lee, Echo, Schwab, Greenwater, Gold Valley and Ibex in California. Farther to the west, across the Death Valley sink, prospectors out of Rhyolite found and established the mines and camps of Emigrant Springs, Skidoo, Harrisburg and Ubehebe, California. All these camps looked upon Rhyolite as the metropolis of the desert, and Rhyolite merchants, teamsters and outfitters, located at the railhead, profited immensely from being situated at the distribution center for the region.

As usual, however, the gold fever which swept the country contained more fever than gold. Some of the smaller camps died almost as soon as they were born, leaving little more than a ripple on the surface of time. Some, like Greenwater, California, spent all their energy on booming, and when the dust had settled, nothing was left to be seen. Most lasted a year or two, or even three. But, with the exception of Skidoo and the Keane Wonder Mine in California, all the smaller camps died before Rhyolite, indicating the larger town’s eminent fate.

Montgomery-Shoshone Mine near Rhyolite, Nevada.

On the surface, Rhyolite seemed as robust as ever in early 1909, and the citizens of the town even started a movement to split the county in two, making Rhyolite the county seat of the southern portion. Such ambitions, however, were hopeless, for the cracks were already appearing in the facade. Although the boom spirit had carried the Bullfrog District through the San Francisco disaster and the Panic of 1907 without appearing to harm the camp, underlying problems were beginning to surface. Investor confidence was weakened by the financial difficulties, a fatal blow to any mining camp. Two of the three Rhyolite banks had closed by the end of 1909, and shady dealings involving two of the district’s most promising mines further shook investor confidence. The Montgomery-Shoshone mill continued to mill its low-grade ore throughout 1909, but there is nothing romantic about low-grade ore. A brief new boom at Pioneer, to the north, seemed to arrest the process of decline for a short time, but a disastrous fire roared through that camp before it was even built, and it never recovered.

Businesses began to decline and close. The Rhyolite Daily Bulletin was the first newspaper to go, printing its last issue in May of 1909, and the Bullfrog Miner followed suit in September. But, the December tax rolls told the real story. When the time came to ante up for county taxes, owners of 156 properties — or 28% of the total tax base — elected to quietly leave town and let their properties be confiscated by the county treasurer, rather than spending more money in a losing cause. As the Mining World summed up, “Mining operations in the Bullfrog District were rather dull last year.”