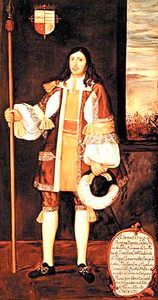 After the Spanish Reconquest of 1692, Taos Pueblo continued armed resistance against the Spanish until 1696, when Governor Diego de Vargas defeated the Indians at Taos Canyon. He soon persuaded the Taos Pueblo Indians to drop their arms and come back out of the mountains.

In 1723, the Spanish government forbade trade with the French, and limited trade with the Plains Tribes only to Taos and Pecos, thereby giving rise to the annual summer trade fairs at those locations where Comanche, Kiowa, and others came in great numbers to trade captives for horses, grain and trade goods from Chihuahua.

In 1776, at the time of the American Declaration of Independence, there were an estimated 67 families with 306 Spaniards in the Taos Valley. At that time, the Ranchos de Taos area was the most populous. That same year the first Spanish church was built in Ranchos de Taos. A few years earlier, the first church in the area was being built in 1772. The Franciscans supervised the construction of the historic San Francisco de Assisi Mission Church that was finally completed in 1816.

During the 1770s, Taos was repeatedly raided by Comanche who lived on the plains of what is now eastern Colorado. Juan Bautista de Anza, governor of the Province of New Mexico, led a successful punitive expedition in 1779 against the Comanche. 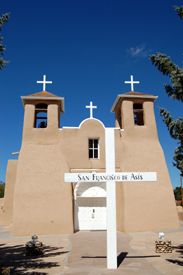 The erection of the church at Fernando de Taos was begun in 1796, but it was not completed until 1806. The ancient church at the Pueblo, which was ruined during the Taos Revolt in 1847, was at one time the headquarters of the Roman Catholic diocese. Spanish/native relations within the pueblo became amicable for a brief period as both groups found a common enemy in the invading Ute and Comanche tribes, but resistance to Catholicism and Spanish culture was still strong. Even so, Spanish religious ideals and agricultural practices subtly worked their way into the Taos community, largely starting during this time of increased cooperation between the two cultural groups.

Between 1796 and 1797 the Don Fernando de Taos Land Grant gave land to 63 Spanish families in the Taos valley and a more formal settlement was established to the northeast of Ranchos de Taos, with a fortified plaza and adobe buildings, surrounded by residential areas. Homes were built in large quadrangles that offered a fortress-like structure. Hostile raiding Indians from outside the Taos area were thwarted in their attempts to enter the village. Sentries stationed at the corners of the fortified village kept vigil day and night. A huge gate offered the only means of entry and exit to the Plaza. The enclosure served as a refuge for livestock at night, and merchants used the area to display their wares during trade fairs.

Taos was, for many years following the American occupation, the chief political storm-center of the Territory. The presence there of such men as Charles Bent, the first Governor; Colonel Christopher “Kit” Carson, the famous scout and guide; Colonel Ceran St. Vrain, the well known merchant; “Don Carlos” Beaubien, one of the original proprietors of the notorious Maxwell Land Grant and the first Chief Justice of New Mexico; Father Martinez, a demagogue, traitor, conspirator against peace and as great a rascal as ever, who remained un-hanged in New Mexico, whether viewed from a political or moral standpoint — such individuals as these gave the community a position in Territorial affairs equal to that of Santa Fe, the capital.

Along with these famous names, there were dozens of other French, American, and Canadian trappers operating in Taos County. A brisk fur trade began, bringing yet another element — the mountain men — to the Taos trade fair. By that time, the Taos Valley was well populated with livestock, agriculture, and people who supplied Mexico with inexpensive goods. Goods also came into Taos, such as the first printing press west of the Mississippi River in 1834, to print books for the co-educational school, which was founded by Padre Antonio Jose Martinez. In 1835, the padre began printing the first newspaper, El Crepusculo, which was the predecessor to The Taos News.  In 1840, some 20,000 Rio Grande wool blankets were exported south to Mexico.

In 1842 Padre Martínez, after giving him instruction, baptized Kit Carson as a Catholic so he could become engaged to marry Josefa Jaramillo. The following year, Kit and Josefa married and Kit purchased a house from the Jaramillo family as a wedding present for his new bride. The house built in 1825, served as the Carson’s’ home until 1868, and today is the Kit Carson Home and Museum. Three years later, in 1846, Colonel Stephen W. Kearney with his “Army of the West” occupied New Mexico for the United States and Charles Bent of Taos was appointed as the first American Governor. That same year, business remained brisk in Taos as 1.7 million dollars in beaver and other furs were traded through Taos. 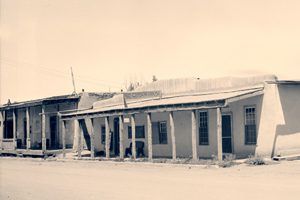 New Mexico formally became a territory of the United States in 1847 with the signing of the Treaty of Guadalupe Hidalgo. However, many of the native Mexicans and Indians were not happy with this event. The Mexicans in the Taos area resented the newcomers and enlisted the Taos Indians to aid them in an insurrection. Mexican Pablo Montoya and Tomasito, a leader of the Taos Pueblo Indians led a force of Mexicans and Indians who did not want to become a part of the United States. Charles Bent, the new American governor who was headquartered at Taos, was killed and scalped in January 1847 along with many other American officials and residents. The rebels then marched on Santa Fe, but the response of the American Army was immediate. A force of more than 300 soldiers from Santa Fe and Albuquerque quickly rode to Taos and after battles in Santa Cruz and Embudo, the rebels were soundly defeated. The remainder of the Mexicans and Indians took refuge in the San Geronimo Mission Church. The American troops bombarded the church, killing or capturing the insurrectionists and destroying the physical structure. Around 1850, an entirely new mission church was constructed near the west gate of the pueblo wall.

In 1852, Taos and other counties in New Mexico were redefined from an earlier division made in 1846 which was based on an old Mexican government Partido and made Taos the county seat of Taos County.

Taos Valley flourished during this period as other cultures found their way into the territory. Taos was a very solid trade center for the region but, with honest merchants and families, also came criminals and prior to the Civil War, it became a hotbed of many of the early conspiracies against the American government. After the Civil War, most criminals moved on and the city of Taos was mostly peaceful. However, there was one great exception in a notorious character who went by the name of “Colonel” Thomas Means. A surveyor by profession, he came to New Mexico Territory soon after the inauguration of civil government by the Americans. He lived in Colfax County for some time, and for years was more or less identified with the tragic episodes which marked the early history of the infamous Maxwell Land Grant. He finally settled down in Taos, where he made life one continuous round of misery for all who were forced into contact with him. He exhibited an insolence and confrontational disposition that constantly precipitated him into trouble until he became such a nuisance to the more peaceably inclined inhabitants as to render drastic measures necessary. He would not only grossly insult and frequently attack anybody who came within his reach, but he beat his wife so badly on innumerable occasions that her life was in jeopardy. 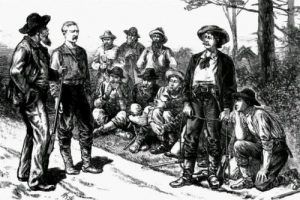 Finding that their appeals to courts of justice were to no avail, in 1868 a number of citizens decided to organize that common frontier institution known as a Vigilance Committee and put an end to “Colonel” Means and all his meanness. Though the vigilantes warned him of his inevitable fate if he continued in his violent actions, Means ignored the threat and on January 2, 1867, when he drew his knife, fired his pistol at several people, assaulted and nearly killed his wife following a “big spree”, he was soon arrested. That night, a group of 15-20 heavily armed men “in disguise” entered the room where Means was being held and forcibly removed him from the custody of his guards. The vigilantes then carried him to an adjoining room, which served as the county courthouse and hanged him from a heavy rafter. The coroner’s jury described Means as “not deserving of the sympathy of anyone, being as he was altogether a dangerous character, continually threatening the lives of peaceable citizens, without distinction and even the lives of members of his own family and innocent children.” The conclusion was that Means had died at the hands of “persons unknown”. The next day was one of general rejoicing that the community had been summarily rid of one of its most disagreeable and dangerous factors. Thus ended the career of one of the most widely known, and at one time, one of the most influential men of northern New Mexico.